The Bell Pottinger Contagion – has this incident damaged the PR sector?

When one agency commits a “blatant instance of unethical PR practice,” is the broader agency sector at risk of reputation contagion?

In March 2017, South African media sources alleged that the now infamous UK-based P.R. agency, Bell Pottinger had run a campaign to deliberately exploit and stoke racial divisions in South Africa in an effort to deflect attention away from the business practices of the Gupta family, who have close links to South Africa’s President Zuma.

On September 24, 2017, after months of ongoing allegations, apologies and resignations within Bell Pottinger, the UK’s largest public relations trade body, the PRCA, announced it was expelling Bell Pottinger (BP) from its membership body. Upon announcing its ruling, the PRCA Director General stated, “This is the most blatant instance of unethical PR practice I’ve ever seen.”

According to the Financial Times, this was only the second time in the past ten years that an agency has been expelled from the PRCA. Many agencies believed that the PRCA ruling would inspire confidence that agencies are well-regulated and that unscrupulous players are promptly punished.

However, in the wake of the controversy and in spite of the PRCA’s actions, public relations practitioners across the agency sector are finding themselves caught in the crossfire and having to defend the ethical practices of the industry as a whole [1]. Our following analysis looks at this reputation contagion across the industry sector, and the risk this creates for even the most authentic agencies – and their clients.

Earlier this year, as published in the Journal of Network Theory in Finance, [2] an operational risk model integrating alva’s reputation analytics and insights revealed that it takes negative coverage of just one company in a sector to affect overall perceptions of the industry. 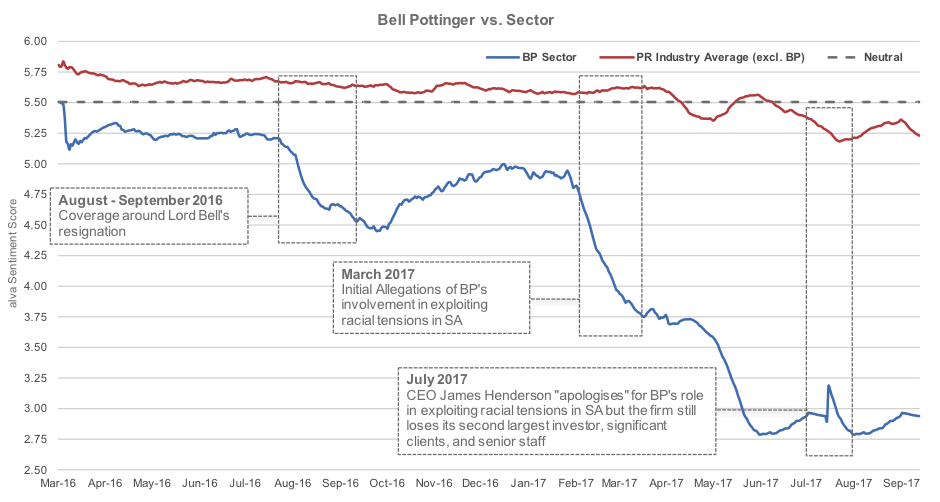 In graph one, we see a significant dip in Bell Pottinger’s reputation in March 2017, when South African media sources [3] alleged that Bell Pottinger had run a campaign to deliberately exploit and stoke racial divisions in South Africa in an effort to deflect attention away from the business practices of the Gupta family and their close links to President Zuma. At this point in the trendline, an outraged public had launched a #whitemonopoly campaign on social media.

In July 2017, Bell Pottinger’s CEO, James Henderson, apologised for the firm’s role in the campaign and announced the dismissal of Bell Pottinger’s lead partner connected with the case, while two other employees were suspended until further investigation. These actions would prove to be too little too late. As observed in the trendline, Bell Pottinger’s reputation then took an irredeemable nose dive. By now, trust in the firm had been badly damaged and Bell Pottinger’s second largest investor, numerous significant clients and a raft of senior staff had pulled their support.

The scale of Bell Pottinger’s decline was so severe that it obscures the effect on the wider sector. Graph two steps back to look at the PR sector from March 2016 to October 2017 and emphasises how the incident is affecting the industry. Our analysts removed Bell Pottinger data to ensure a true view of the sector.

To give context to the following data, note that we view 0.1 shifts as significant. So, looking at graph two, the fall of the sector by 0.5 from the pre-scandal average is considerably steep. 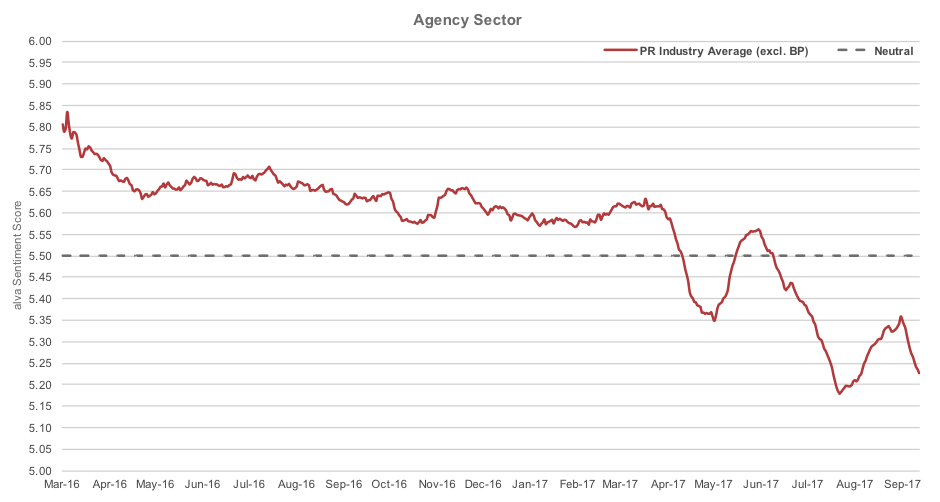 In the current ubiquitous media context, businesses are constantly exposed, and negative news is being broadcast in constant real-time directly to (and by) stakeholders. This has the potential to create a significant and lasting mar on a company’s reputation and could permanently impact a company’s ability to create value. Communications and Corporate Affairs Directors have a responsibility, along with company executives, to maintain oversight of the issues affecting the business and ensure clarity into the company’s culture, reputation and stakeholder relationships. This same responsibility holds true when it comes to choosing and managing external agencies or partners, which are in effect an extension of a company.

The savvy intuition of successful PR professionals is best coupled with a sophisticated reputation intelligence program to guide the way and support the authenticity of their approach. If agencies and their clients have access to both quantitative and qualitative data, then they will be armed with a counter-point to “fake news” accusations and other negative claims. This approach helps PR professionals to avoid the potential pitfalls of “gut instinct” alone, and empowers their clients to create authentic, value-creating relationships with their stakeholders.

[1] PR Week, PR and Beyond: Does the PR Industry Have an Ethical Problem? http://www.prweek.com/article/1443134/bell-pottinger-beyond-does-pr-industry-ethical-problem

“Getting Smart”: Smart grids and the move to DSO