The last 18 months have been an interesting period for the pharma industry and its communication teams. Alongside the announcements of big M&A activity and the ongoing jostling for position on innovative research and technology, a softer, more purposeful aspect to the industry has been quietly taking shape.

Pharma is not unique among industries in recognising the need to respond to emerging stakeholder appetites for purpose before (or at least alongside) profits as a priority. But in some senses it is perhaps more surprising to see its leaders take up this mantle.

While cynics may cry foul and point to spin, having worked with many of the firms in this sector, it’s clear that the efforts are genuine and well-intended.

Which must have made the latest report by PharmaView on the industry’s reputation for patient centricity particularly tough reading.

The report revealed that only 28 percent of people in the UK have a positive view of the pharmaceutical industry, which is significantly lower than the global figure, which stands at 41 percent.

But in many ways, the main challenge for communicators in the pharma space is the reputation of the sector itself and particularly the “Big Pharma” tag that dogs the sector and skews the presentation of many of its more positive initiatives.

The presence of a “Big +” tag for an industry is a handy indicator of a sector that is facing reputational challenges – be it the Big 4 accounting firms, the Big 6 energy suppliers, Big Tobacco or Big Sugar to name a few.

Indeed various definitions for “Big Pharma” include this from the Cambridge English Dictionary:

Large pharmaceutical companies (= companies producing medical drugs), especially when these are seen as having a powerful and bad influence.

And the following from Merriam-Webster:

For pharma, the main issue is that the “Big Pharma” tag is not going away. In fact its usage is only becoming more entrenched in media and social media narratives. 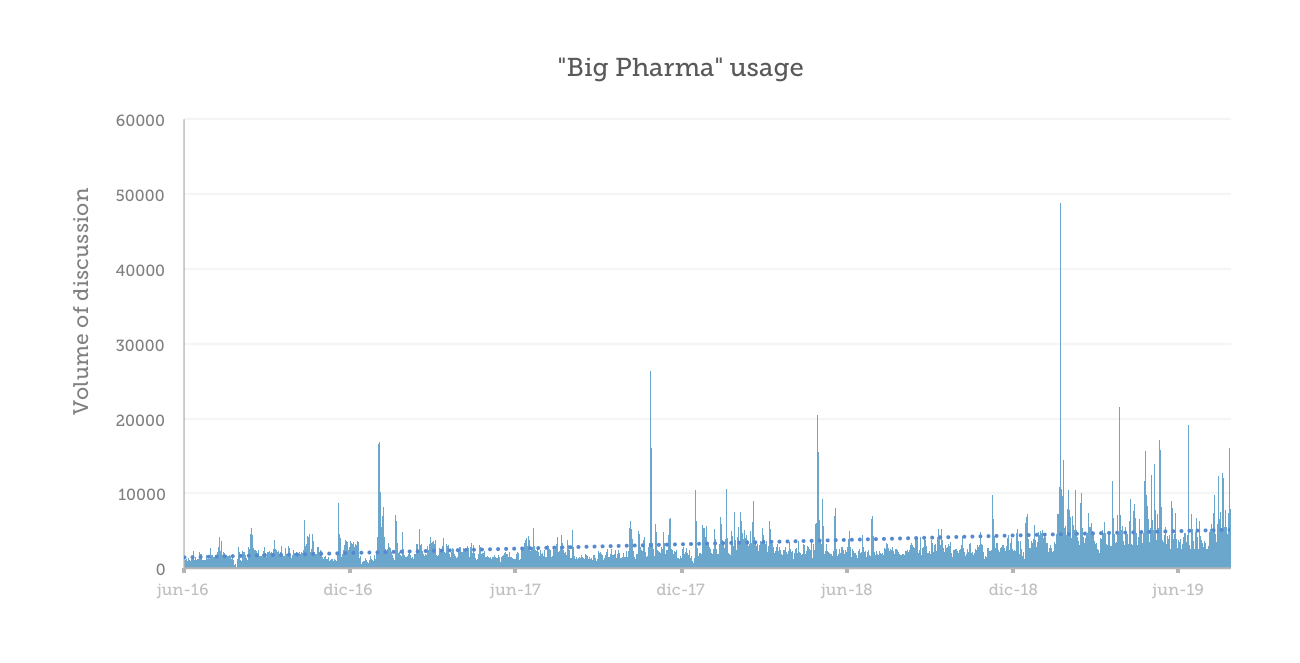 Over the past three years, we have seen a sharp increase in the frequency with which the term “Big Pharma” is used by the mainstream media and social media users. This uptake has been driven by high profile drug pricing scandals, the ongoing opioid crisis as well as political intervention and condemnation of the sector at large.

It goes without saying that this is a highly undesirable combination; increased proliferation of the term in conjunction with a much greater negative tone of commentary really is the worst of both worlds.

As we have seen on numerous occasions, one player can drag down the reputation of the entire sector and the reverse is also true; the bad reputation of an entire sector can act as a negative gravitational pull on its individual component firms, preventing them from being able to break free of its deleterious effects.

None of this is to say that Pharma’s negative reputation is undeserved, but rather to highlight the challenge facing the sector and its communicators in credibly articulating a change in position that will be taken at face value, rather than being filed away as another Big Pharma tactic.

In the UK Energy sector, we have seen examples of companies trying to break free from this association, with varying degrees of success. For pharma communicators, the prize of differentiation is a great one – the company that can credibly and consistently demonstrate that it has changed has the potential to take the reputational spoils, to be the poster child and the positive example to the rest of the sector.

In short, to not be Big Pharma.

How a CEO’s reputation can shape corporate reputation