On the 9th of June, a second EU referendum debate was televised, with Boris Johnson and Nicola Sturgeon the most prominent figures on the opposing sides.

A few days earlier, the first debate resulted in the pro-Brexit Nigel Farage seeing a 29% day-on-day fall in sentiment. While sentiment towards David Cameron also fell, it was only by 6%, meaning the pro-remain campaign seemed to have comfortably won that round.

To understand the affect of the second debate, we once again turned to our comprehensive monitoring and media content analysis platform to examine sentiment trends around the debate.

Boris Johnson appears to have performed best on this occasion, ranking 4% above his monthly average, and also seeing a 5% day-on-day improvement.

Sturgeon’s sentiment only fell 2% day-on-day, but it was 9% below her monthly average. While not as big a margin as previously seen with Cameron v Farage, this will be disappointing to the pro-remain campaign as Sturgeon had a higher average sentiment rating than Johnson over the prior 31 days, and had been ahead in the four days before the debate. 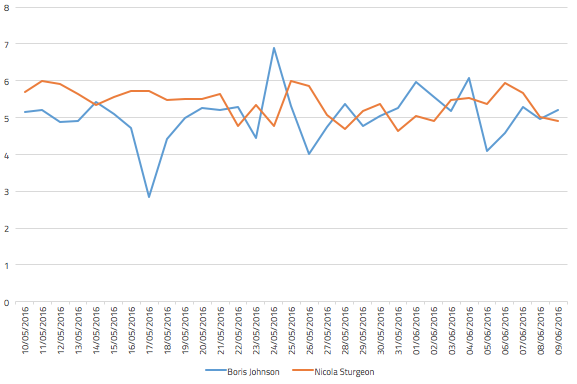