Brexit: is the reputation of pharmaceutical companies at risk?

On 20 February, UK prime minister David Cameron announced that the EU referendum deciding if Britain should remain in the European Union will be held on 23 June 2016. This announcement has triggered concerns for the pharmaceutical sector, with several industry commentators stating that continued EU membership is in the best interest of the UK’s strong life sciences sector.

Being part of the EU represents an opportunity for the UK to access “specialised labour and common regulatory standards”, claimed Pascal Soriot, chief executive of AstraZeneca. Fifty-four pharmaceutical executives in the UK also expressed concern that Brexit would lead to “disruptions and significant regulatory burdens”. However, the biggest concern for scientists is that Brexit could “threaten £8.5bn of EU funding for UK science over the next four years”.

The majority of pharmaceutical companies operating in the UK have sought to build strong local positioning around their investment in R&D, UK hubs and the development of the UK’s life sciences sector. This has been an important driver of reputation with local MP’s, communities and Whitehall more generally.

In light of the Brexit discussion across the industry and this concern around UK research investment, alva investigated the current impact of companies’ investment in UK research on reputation, and how much media coverage these companies stand to lose, should a Brexit have the effect feared by some in the industry.

Over the last six months, the companies tracked within the pharmaceutical sector received positive coverage around their R&D in the UK.

The graph below shows the volume of media coverage around research investments made by major pharmaceutical companies in the UK.

Figure 1: Media coverage around research investments in the UK 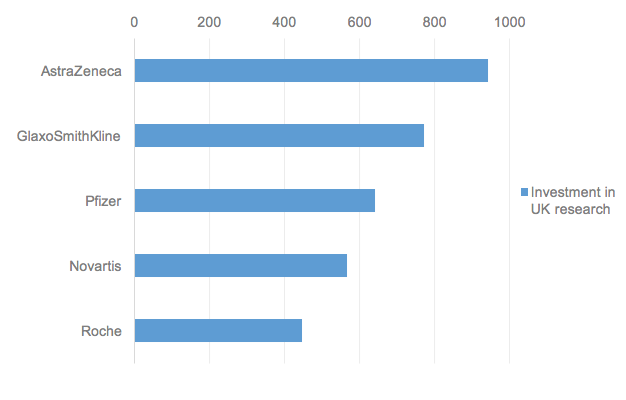 AstraZeneca received the largest amount of coverage compared to its peers, with content focused on its ongoing investment in novel drug R&D. The company’s collaboration with academic institutions were discussed as “strengthening its long support for the UK science base”.

GlaxoSmithKline was ranked second in coverage around investment in UK research, with the most impactful coverage focused on the company’s plans to expand its antibiotics and penicillin plants within the UK.

Pfizer benefitted from positive media coverage around its ongoing drug discovery collaborations to research and develop new treatments. Coverage of this issue was driven mostly by Pfizer’s involvement alongside five other major drugmakers and the UK government in the “first venture capital fund” aiming to develop new ways to combat dementia.

Even though Novartis did not benefit from the same volume of coverage as AstraZeneca or GlaxoSmithKline, the company’s commercial relationships with Oxford Biomedica generated the largest amount of positive media coverage during the six-month time period.

Roche was the fifth most visible amongst the companies analysed in this report. The UK Contract Awards received by Roche had the highest contribution to the company’s coverage around UK science initiatives.

Overall, the analysis indicates that research investments in the UK have historically boosted the visibility of companies within the pharmaceutical sector. This evidence supports scientists’ concerns around the effects of Brexit, which could affect the UK’s access to ideas, people and access to investment in science.

However, should a Brexit not come to pass or not have the feared impact on the UK as a science hub, how can companies continue to gain reputational capital from their investment in British scientific research?

These five companies benefitted most from coverage around UK expansion strategies and initiatives to build innovative and patient-centric relationships with academic institutions, the UK government and other pharma companies.

Corporate sustainability initiatives: how can a communication gap harm reputation?

How to best communicate an automotive product recall