Which car manufacturers made the biggest splash at Frankfurt Motor Show 2017?

The International Motor Show in Frankfurt is the world’s largest motor show, presenting a significant opportunity for leading car manufacturers to generate attention.

In order to understand which brands have made the most of this global platform this year, alva analysed all social content related to the event, for more than 30 manufacturers, throughout September 2017.

The infographic below highlights the top ten most visible car brands related to the Frankfurt Motor Show. It is immediately clear that despite having an international scope, the focus is firmly on the home-market, with German brands occupying the top five spots. BMW lead the way, getting referenced in 17% of all content, but those top five brands achieved 56% share of voice for the 30+ brands analysed. 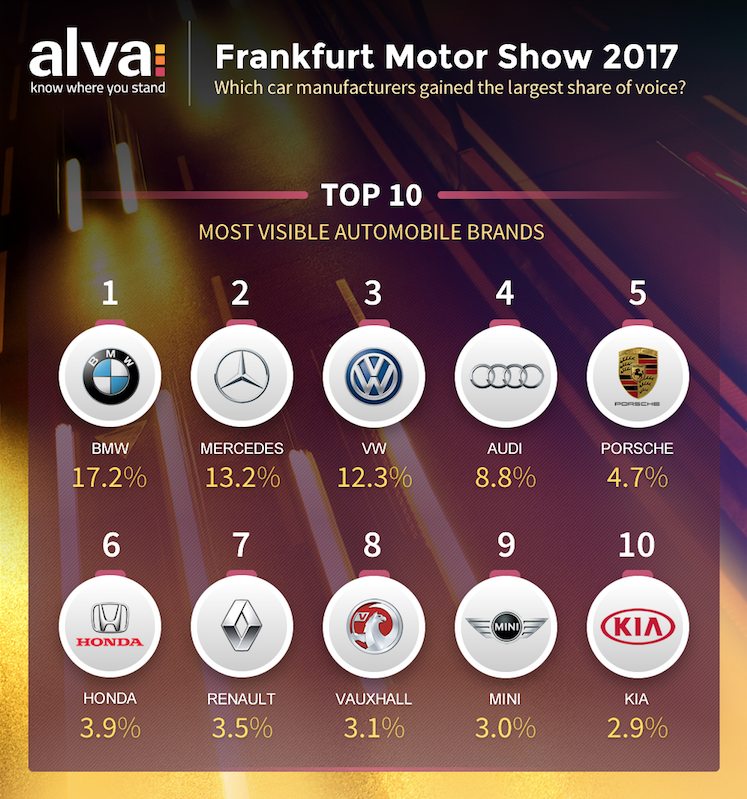 New product announcements and concepts always generate interest and the BMW M5, Mercedes-AMG Project One, Audi R8, VW Polo and Porsche Cayenne all contributed towards solidifying the German brands’ position at the top of the ranking.

The flipside to the German dominance is the lack of coverage generated by us brands, with Tesla highest in 11th, followed by Ford in 15th.

However, the other major theme at the 2017 event was electric/hybrid vehicles. We recently reviewed the automotive brands dominating the electrified vehicle space in the lead up to the event, but many of the new announcements focused on the product’s green credentials. 2020 was a recurring target for widespread adoption of electric models, with numerous brands committing to either fully switch or provide the option across the majority of their range.

Honda was the leading non-German brand and it owed a lot of its coverage to the new Urban EV concept, a fully electric car expected to debut in 2019, which showcases the manufacturers pledge to offer full electric or hybrid versions of every model by 2025.

Mini placed highly, partially due to its German ownership, but the new Mini Electric Concept also generated attention, though it also has a 2019 launch date.

There were a number of prominent companies that chose to skip the 2017 event, including the GM portfolio, Fiat Chrysler, Peugeot, Volvo and Jeep. Despite not having a presence at Frankfurt, these brands still featured in over 3% of all discussions related to the event.

While it may seem a risk or a missed opportunity to be absent from the world’s largest motor show, the bias towards German brands during the 2017 event does suggest that other companies might struggle to achieve the same impact around new announcements.

This is a potential risk to the standing of the event. If the absentees can successfully leverage other platforms for their new announcements, more brands may decide that the insular nature of the Frankfurt show is a less effective channel than competitor shows or hosting their own events.

5G: How can Telecoms best engage with consumers?