The Christmas season is a crucial period for retailers, with the Centre for Retail Research finding that many UK companies make more than half their sales and profits in the three months before Christmas.

In 2016, UK companies are expected to spend £5.6bn on marketing over the festive period, an increase of £300m from last year. Television adverts are a crucial component to the marketing mix, with £1.3bn expected to be paid for the best slots.

In recent years, John Lewis has been at the forefront of the revival of interest in these Christmas adverts. However, as more brands try to emulate its success, the media landscape has become a noisier and more competitive place.

As these adverts now gather so much attention, it can be difficult to cut through the noise and understand the impact they have on sentiment towards the brand.

This report aims to answer the following questions:

Which retailer received the most coverage?

We reviewed almost 300,000 pieces of content from November 2016, related to six of the most prominent retail brands with Christmas adverts. As might be expected, John Lewis generated more content than any of its peers, getting referenced in over a third of the total discussions and 15% more than its nearest competitor. 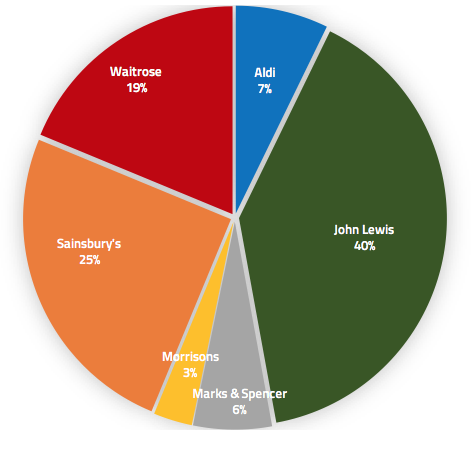 Sainsbury’s is the nearest challenger for share of voice, closely followed by Waitrose. At the other end of the scale are Morrisons, Marks & Spencer and Aldi, which all seem to have made little impression on consumers.

The end goal for these Christmas adverts is not just to generate attention, but to increase sentiment towards the brand in order to boost advocacy and purchase intention. An advert that is widely criticised can gain a lot of column inches but turn away consumers.

Therefore, it is also important to understand how sentiment was affected by the adverts. 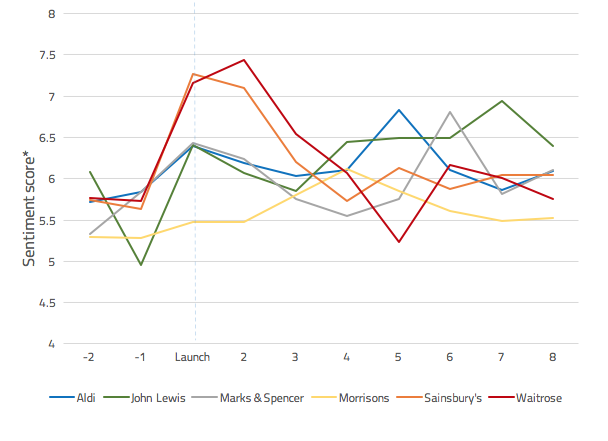 As each advert launched on a different date, Figure ii shows the sentiment towards each brand for the day of the advert launch and the following week.

We can see that the two brands that received the best immediate response were Sainsbury’s and Waitrose. John Lewis, M&S and Aldi also had strong positive reactions, but significantly trailed behind the leaders.

Morrisons once again lagged well behind, and was the only brand to record a score below the 5.5 neutral sentiment line on the day of launch, indicating a marginally negative reaction to its offering.

However, the success of these campaigns does not solely depend on the launch day reaction, but the performance across the full festive period, as consumers can become overexposed or grow tired of certain campaigns.

If we rank the average daily sentiment for all the brands in the weeks following the launch of their Christmas adverts, the picture changes slightly, with John Lewis coming to the fore. 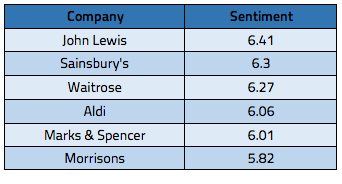 This table shows that John Lewis has generated the most consistently positive sentiment for its 2016 campaign, with both Sainsbury’s and Waitrose performing well, but unable to sustain their strong initial positivity.

How have brands performed compared to the previous year?

In addition to the increased external competition, brands now also find themselves judged against their own Christmas adverts from previous years. By looking at the bigger picture we can get a better understanding of which brands are getting most value from this initiative. 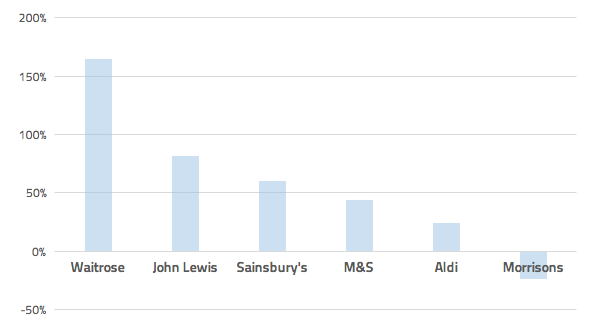 We can see from Figure iv that Waitrose has made the most significant gains in coverage compared to 2015.

Potentially even more significant is the discovery that John Lewis is actually increasing the gap between itself and its nearest rival Sainsbury’s. In 2015, there was a 10% gap in content volumes, which has increased to 15% this year.

These findings reinforce the perception that John Lewis has positioned itself as the focal point for festive advertising. Research conducted by the ad agency behind the John Lewis adverts found that “continuously investing in marketing each Christmas has led to a virtuous circle of improving returns”. In addition, they claim that in the first few years of their increased focus on festive marketing, every £1 spent on advertising translated to £5 in sales, but in 2015 the return had increased to £8.

By moving away from advertising individual products to more of an “event” style campaign, John Lewis have become the benchmark by which all other brands are judged. Even if people prefer campaigns by other brands, they are still frequently compared to the John Lewis advert.

This ensures that John Lewis maintains high visibility levels and are consistently included in the conversation around Christmas shopping.

The main winner in the 2016 festive advertising season is the John Lewis Partnership. John Lewis itself generated most discussions, increasing its share of voice from 2015, while also garnering the highest average sentiment so far this November. Meanwhile, its sister-brand Waitrose has made the best gains in exposure compared to 2015.

Despite a strong campaign by Sainsbury’s, especially evident in the strong positive response to their advert launch, they continue to lose ground in share of voice to John Lewis. However, the average sentiment between the two brands is fairly close, so there is still potential for Sainsbury’s to have the preferred campaign each year. It will still have to accept that John Lewis will continue to be the reference point for the other rival brands, unless they can continuously upstage them over a number of years.

At the other end of the scale, Morrisons has had a largely forgettable campaign so far, losing ground on its share of voice in 2015. Despite being one of the earlier campaigns to launch, sentiment only started to pick up when other campaigns began to launch. This would suggest that it hadn’t resonated with consumers on its own terms, and was being viewed in comparison to other efforts.

Overall, the research shows the value in establishing a brand as the main reference point for an event as consumers not only actively seek out your campaigns, but also refer back to your brand even when consuming rival adverts.

It will be interesting to see how this trend develops over future years, and if more individual global brands, like Coca-Cola’s long-running “holidays are coming” Christmas adverts, respond to this success and challenge the large retailers for advertising space and consumer attention.

What is the long term reputational effect of a cybersecurity breach? TalkTalk – 12 months later