Climate change – an existential reputational risk to the mining sector?

Alongside the cyclical movements in commodities prices, the extractive industry has had to deal with the increasing visibility of its activities to a wider range of stakeholders, facilitated in part by the emergence of digital and social technologies.

Previously siloed and isolated stakeholder groups are ever more interconnected, meaning that a local community issue in South America can become a concern to an investor in London in a way that was simply unimaginable ten years ago.

The sector by-and-large has undergone a painful shift to re-orient itself from a shareholder- to stakeholder-centric model, with the views and opinions of a wider and more diverse range of groups increasingly being taken into consideration at board level.

Drivers of reputation in the mining sector

alva has been monitoring and analysing the reputation of the extractive sector for the past four years and recently conducted a landscape analysis of the key issues affecting the sector in conjunction with the International Council on Mining & Metals (ICMM).

While many familiar risks were present in the data, such as health and safety, a standout finding was the prominence and growth of the risk related to climate change.

Figure I: Key reputation risks for the mining sector March-May 2015 vs June-August 2015 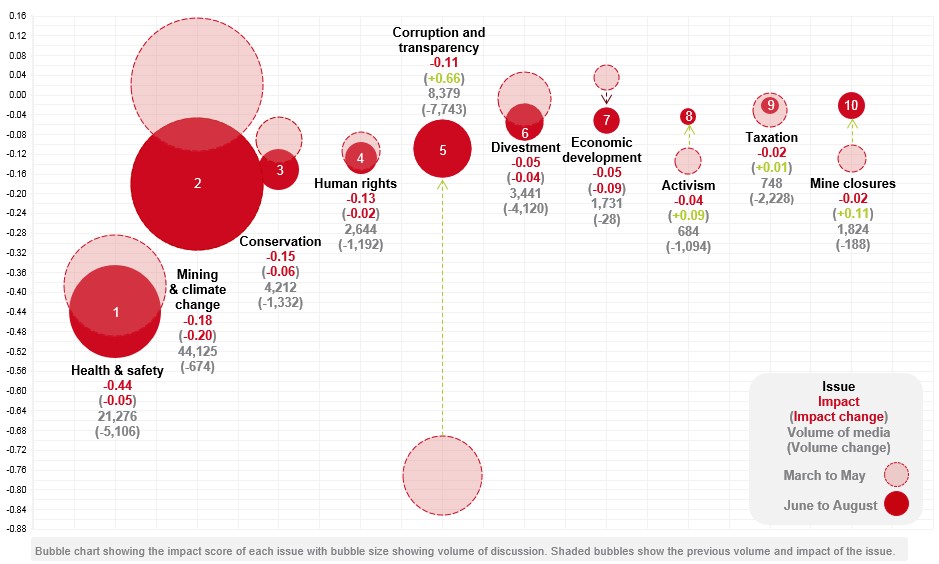 Climate change ranked as the second most negative issue affecting stakeholder perceptions, exceeded only by health & safety [ii] but generated almost as much coverage as all other issues combined at 88k articles between March – August 2015. The issue also increased in negative impact by 10x between the two periods analysed, a significant shift in sentiment.

While these substantial shifts in volume and reputational impact were themselves unexpected, what was even more noteworthy was that 69% of the content discussed mining as a sector in its entirety, rather than focusing specifically on coal mining.

The significance of this is that the mining sector at large is thereby exposed to the reputational risk of climate change – a threat both to the credibility of its efforts to re-position itself as a more sustainable sector, and by extension to its license to operate.

Whilst smaller NGOs may be highly antagonistic at a local level towards individual mining companies, those with global reach such as Greenpeace, Sierra Club and Friends of the Earth are the most visible in discussion of the major industry issues, and are increasingly writing a narrative that has the potential to define the reputation of the industry in the future.

The graph below shows the most prominent NGOs in discussion of each of the above industry issues. Overall Greenpeace was the most visible NGO in conjunction with the issues analysed, ranking top for climate change, conservation, activism, taxation, divestment and economic development. Greenpeace also scored as 37% more visible than the second most visible NGO, demonstrating that at least from March – August 2015 Greenpeace exerted particular influence in changing perceptions of the extractive industry. 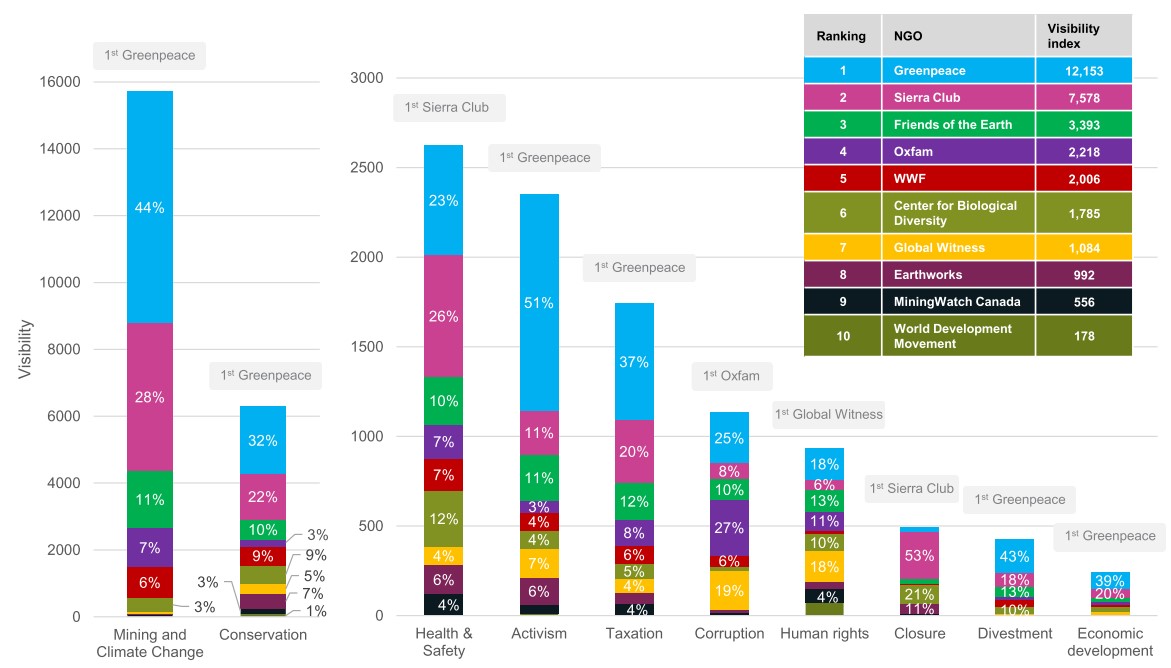 Outside of NGO activity, several initiatives such as the Investor Network on Climate Risk, the Carbon Disclosure Project and the Institutional Investors Group on Climate Change have begun to put pressure on mining companies to disclose climate-related risks. Moreover, EY’s second investors survey, Tomorrow’s Investment Rules 2.0 recently found that disclosure around the issue is now much higher on the agenda, with more investors increasingly likely to reconsider investments based on disclosures about climate change-related risk.

In short, perceptions of the efforts of the mining industry to address climate change are now as relevant to investors as to civil society. Inertia around climate-related risk is increasingly likely to impact investor sentiment and therefore to carry a cost to the balance sheet.

In alva’s analysis, calls for increased action on climate change from Chief Executives were most effective in insulating mining companies from criticism. BHP Billiton’s CEO Andrew Mackenzie was particularly vocal during March – August 2015, succeeding in offsetting some criticism in Australia of the environmental impact of the company’s coal operations.

The ability of an extractive firm to demonstrate a progressive position on climate change is likely to be critical in determining its long-term reputational performance. Being seen to be ahead of the legislative curve is likely to be key to enhancing and protecting corporate reputation, as long as executive claims are seen to be being backed up by genuine efforts to implement change.

In conclusion, alva’s analysis shows that the external operating environment is becoming increasingly challenging for mining companies around climate change.

alva is conducting analysis of external perceptions of the mining sector in conjunction with ICMM on an ongoing basis. If you would like any further information on this subject, or any of the other issues analysed by alva in the mining sector, please contact us.a

[i] alva’s analytics engine captures and analyses discussion in English language media of any one of the issues listed in conjunction with ICMM members (comprising the many of the largest mining companies in the world), analysing the language to determine how positively or negatively a company is portrayed.

[ii] Health & safety consistently appears as a hygiene factor for the mining sector in alva’s analysis. Firms can do very little to generate positive sentiment from improving occupational health and safety. No injury or fatality is an acceptable cost of doing business and thus safety issues consistently receive high volumes of exceptionally negative media coverage. In June – August 2015, negative health and safety content was primarily driven by fatalities in Australia, Brazil and South Africa.

Cybersecurity and the risks to reputation

The impact of P2P on the reputation of banks: “If you can’t beat them join them”