On the 18th May this year, Google launched Android Pay in the UK to enable Android users that hold accounts with supporting banks to make contactless payments using their phone. Android Pay is often billed as Google’s rival to Apply Pay, which launched in July 2015 to a huge reaction in which consumers responded both positively and negatively to communications from retail banks.

The importance of these communications was shown as many consumers changed banks in order to be able to use Apple Pay a few weeks earlier, whilst other consumers remained with their existing bank, encouraged that support for the technology was being worked on despite a “long” delay.

In March 2016, the latest month for which Kantar WorldPanel have data, 34.8% of smartphones sold ran the iOS platform. Phones carrying Google’s Android platform were 24 percentage points ahead, comprising 58.8% of smartphone sales. This implies, given the impact Apple Pay had on the sector, that Android Pay has the potential to cause an even greater ripple.

To gain insight into the effect of Android and how retail banks can adapt their communications around Android, improving their corporate reputation by harnessing any positive effects and mitigate negative ones, alva analysed all the publicly available data to answer three core questions related to the launch:

What is the impact of Android Pay on the retail banking market?

To answer this question, alva analysed the sentiment relating to Android Pay expressed towards the retail banks. The charts below show the sentiment expressed on the day of launch and the following day (18th and 19th of May), both overall, and split by banks that launched Android Pay, and banks that hadn’t launched. 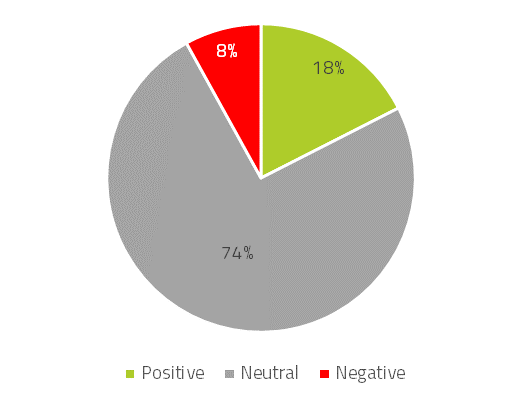 Figure II: Sentiment comparison for banks with and without Android Pay 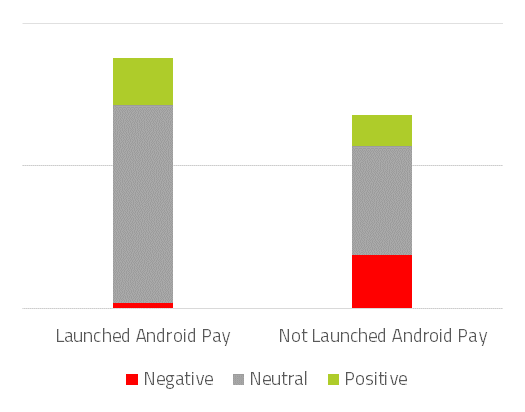 Figure I shows that a large proportion (74%) of content was neutral, tending to be un-opinionated, factual content for example detailing which banks had launched and how the technology worked without expressing specific brand sentiment or brand insight. Among opinionated content, there was more than twice as much positivity (18%) expressed towards retail banks regarding Android Pay than there was negativity (8%).

Figure II additionally shows that the vast majority of this negativity stems from customers of banks who do not yet support payments using the technology, rather than negativity surrounding the actual implementation of the technology.

Overall Android Pay has had a positive impact for the banking sector. Those that have implemented the technology have done so without issues, resulting in the vast majority of negative sentiment being aimed at the banks that don’t offer Android Pay.

Which of the banks gained the most positive brand sentiment around their support of the payments technology and why?

To achieve this company analysis, alva looked at the volumes of positive sentiment expressed towards six of the major retail banks, three of whom supported Android Pay from launch, and three of whom did not. 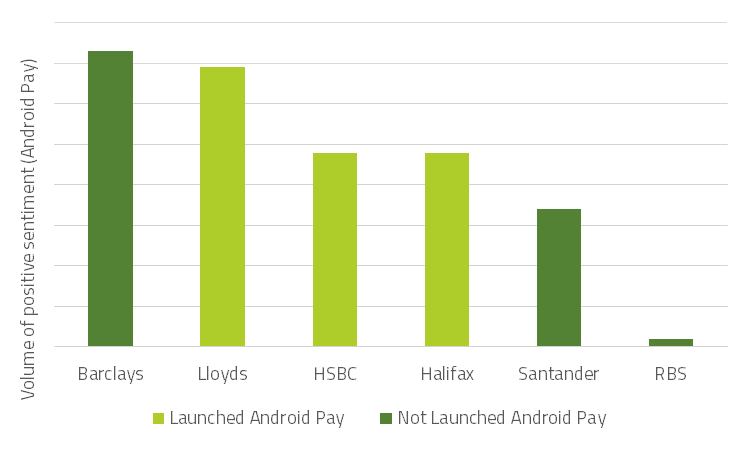 Halifax, HSBC, and in particular Lloyds lead Santander and RBS, neither of whom supported Android Pay from launch. Interestingly, all are led by Barclays who do not support Android Pay but have announced the imminent launch of a proprietary mobile contactless payments system within its own mobile app, which will offer similar functionality.

Much of the positive sentiment expressed towards Lloyds relates to “firsts”, with customers announcing that they had just made their first purchase using the technology, and thanking Lloyds bank as a result.

The greater volume of positive sentiment when compared to HSBC and Halifax can partly be explained by engagement with an @AskLloydsBank tweet on launch day announcing the availability of the service for customers, which received retweets and responses. An earlier tweet by one of its competitors in March, significantly ahead of the launch, failed to gain such engagement.

Those that supported Android Pay (or an android platform equivalent in the case of Barclays) from launch gained the greatest volume of positive sentiment. This was enhanced in the case of Lloyds by tweets and communication close to, or on the launch date.

What are the reputational risks for those that haven’t launched Android Pay?

To gain greater insight on the potential risks for banks not supporting Android Pay, we looked at historical data surrounding the launch of the Apple payment service, Apple Pay, in July 2015.

The graphic below compares the sentiment response to communications from two retail banks who did not launch Apple Pay with the first wave the 14th July 2015, waiting instead until the 11th September.

As both competitors suffer on launch day, sentiment towards the two starts to diverge as Competitor A maintains consumers informed as to their on-going and active efforts to bring Apple Pay to their customers. This is most apparent on the 14th August 2015 and the 4th of September 2015, highlighted in the graphic.

The benefit of Competitor A’s communication strategy of keeping consumers informed as the banks inches an ever “smaller step away” from launch (and conversely the risk to Competitor B of not providing concrete progress updates) is borne out by the contrasting reactions at launch: competitor B achieves a sentiment score of 6.61, while competitor A enjoys a very high score of 7.50 points.

“Concrete” information in this case excludes vague messages such as “coming soon” which were commonly deployed around Apple Pay to little effect, and instead refers to progressive updates such as “now appears to be just a small step away”.

Applying the lessons from Apple Pay to Android pay, maintaining customers informed with concrete information while working to bring the service to them can mitigate impact on sentiment, and even protect sentiment for those banks who did not offer Android Pay at launch.

Overall, the impact has been positive for the retail banking sector, with more than twice as much positive brand sentiment expressed than negative sentiment

Lloyds gained the most positivity, largely due to well-timed communication of its launch (a feat the bank has also achieved for previous product launches).

Providing progressive updates with some concrete idea as to when the technology will be launched can protect sentiment trends and increase positivity at launch. Not doing so poses a corresponding reputation risk versus competitors.

Footnote: The methodology – how do we calculate sentiment scores?

The alva algorithm calculates sentiment scores out of 10, where a score of 5.50 is considered neutral. The algorithm takes into account the volume, influence, prominence and relevance of real-time mentions from 80,000+ news sources, more than 3m blogs and forums, 100+ social networks. A score above 6.00 is considered strong, while a score below 5.00 is considered weak. “Digital” refers to mentions of online and mobile channels, including for customer service and everyday banking.

Which other products are most at risk from the sugar tax?