Corporate sustainability initiatives: how can a communication gap harm reputation?

All efforts to operate with an environmentally sustainable focus should be applauded, and companies are learning that a sustainability agenda is becoming increasingly important to building trust and a reputation for ethical behavior among a wide range of external stakeholders.

When a company undertakes effective sustainability programmes like the anti-deforestation policies highlighted in Greenpeace’s report, it is often just as important to communicate these initiatives to these external stakeholders. A communication gap can prevent a company from building the reputation it deserves among investors, consumers and NGOs.

So, while Greenpeace has identified the companies among this group of 14 with the most impactful anti-palm oil deforestation policies, alva has employed content analytics through its intelligence platform to identify which of these companies are most visibly linked with sustainability policies in the public sphere.

Out of these 14 companies, which were the top 5 most positively linked to palm oil anti-deforestation initiatives? 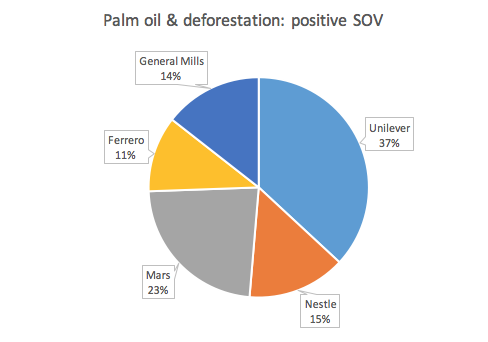 What type of coverage drove positive visibility on the issue of deforestation and palm oil sourcing? 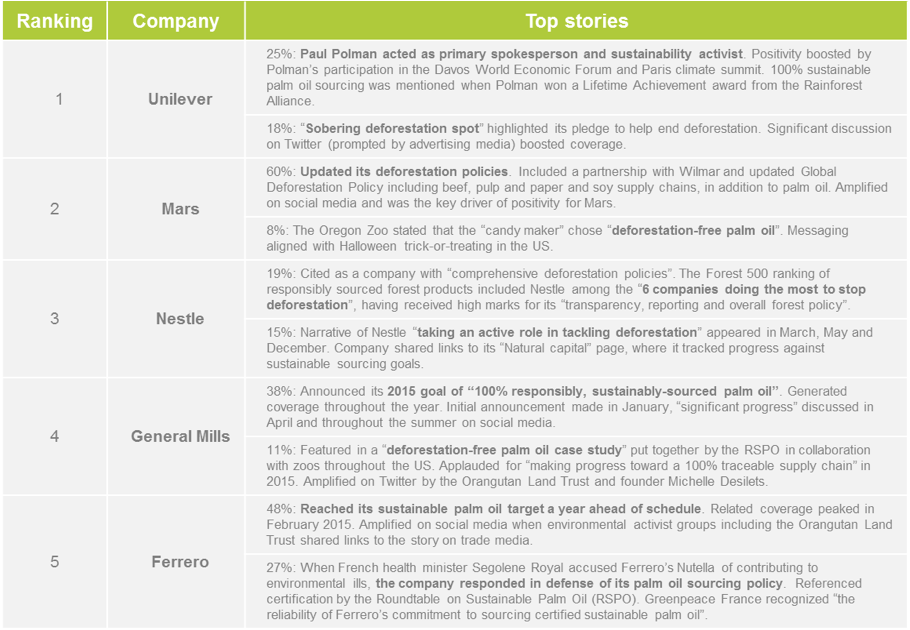 Where is there a communication gap?

Ferrero and Nestle were the companies given the highest marks by Greenpeace for combatting deforestation caused by palm oil sourcing, having received praise for their traceable palm oil supplies, support of industry reform and membership in palm oil sustainability organisations. Both of these companies communicated these achievements in 2015, but there may be lessons to be learned from Unilever and Mars, who were more visibly linked with positive palm oil and deforestation content last year.

While the majority of the consumer goods companies that alva analysed promoted progress towards their deforestation goals, Unilever took advantage of the advertising channel by running a TV spot aimed at emotionally connecting with consumers and highlighting the company’s sustainability agenda. Along with this multi-channel approach, Unilever benefitted from having a publicly visible CEO who spearheaded the company’s anti-deforestation and climate change initiatives.

Mars, the second most visibly linked company to its palm oil sustainability achievements, not only benefited from third-party advocacy from the Oregon Zoo but updated its deforestation policy to extend beyond palm oil sourcing. By linking its sustainable palm oil strategy with an expanded initiative, Mars amplified coverage around this story. Coverage of the expanded policy typically framed it as a continuation of the company’s palm oil policy – with one source claiming that the palm oil policy makes Mars “one of the more responsible companies within its space”.

How can companies bridge the gap?

While Greenpeace’s scorecard and alva’s analysis focused on consumer goods companies and the issue of palm oil deforestation, there are lessons to be learned around sustainability communications in any industry.

By effectively bridging the communication gap between progress in sustainability and engaging with stakeholders, a company can benefit from the positive reputation it deserves.

Brexit: is the reputation of pharmaceutical companies at risk?