Disrupting Reputation: The Impact of COVID-19 on US Banks

At the other end of the scale, we’re all familiar with the sectors that are being hit hardest: tourism, with some estimates suggesting 2020 will show a 60-80% decrease in travel; commercial real estate, where leasing volume has been down 25% in some markets YoY; insurance, where alongside vastly increased numbers of claims, premiums are down and indeed many insurers have offered payment grace periods; and finally, banking, where the pandemic has acted as a shock of a similar scale to the 2008 financial crisis.

Let’s take a closer look at banking and specifically some of the reputational challenges the sector has faced. It’s been a very public rough ride during 2020; none of the US ‘big four’ (Bank of America, Citi, JPMorgan Chase, and Wells Fargo) were isolated reputationally from some of the critical coverage around the implementation of the Payment Protection Plan (PPP), with some of this focusing on lawsuits regarding the prioritization of loan applications, around alleged profiteering from loan fees, and even on suggestions of customer data being exposed during the loan application process.

Beyond PPP, however, what we are asking ourselves now is this: how, if at all, has the pandemic changed the nature of banks’ reputations more broadly, and how is it shifting the market?

alva analyzed the reputations of the big four, and over 65 regional banks in the US, focusing on media coverage and commentary (including social media) from April to June 2020. We first identified the nine key issues for the sector – i.e., the nine issues determined by our proprietary topic modelling as being the most impactful from a sentiment perspective – and compared the average score for the big four with the average score for the regional banks. We found some surprising results. 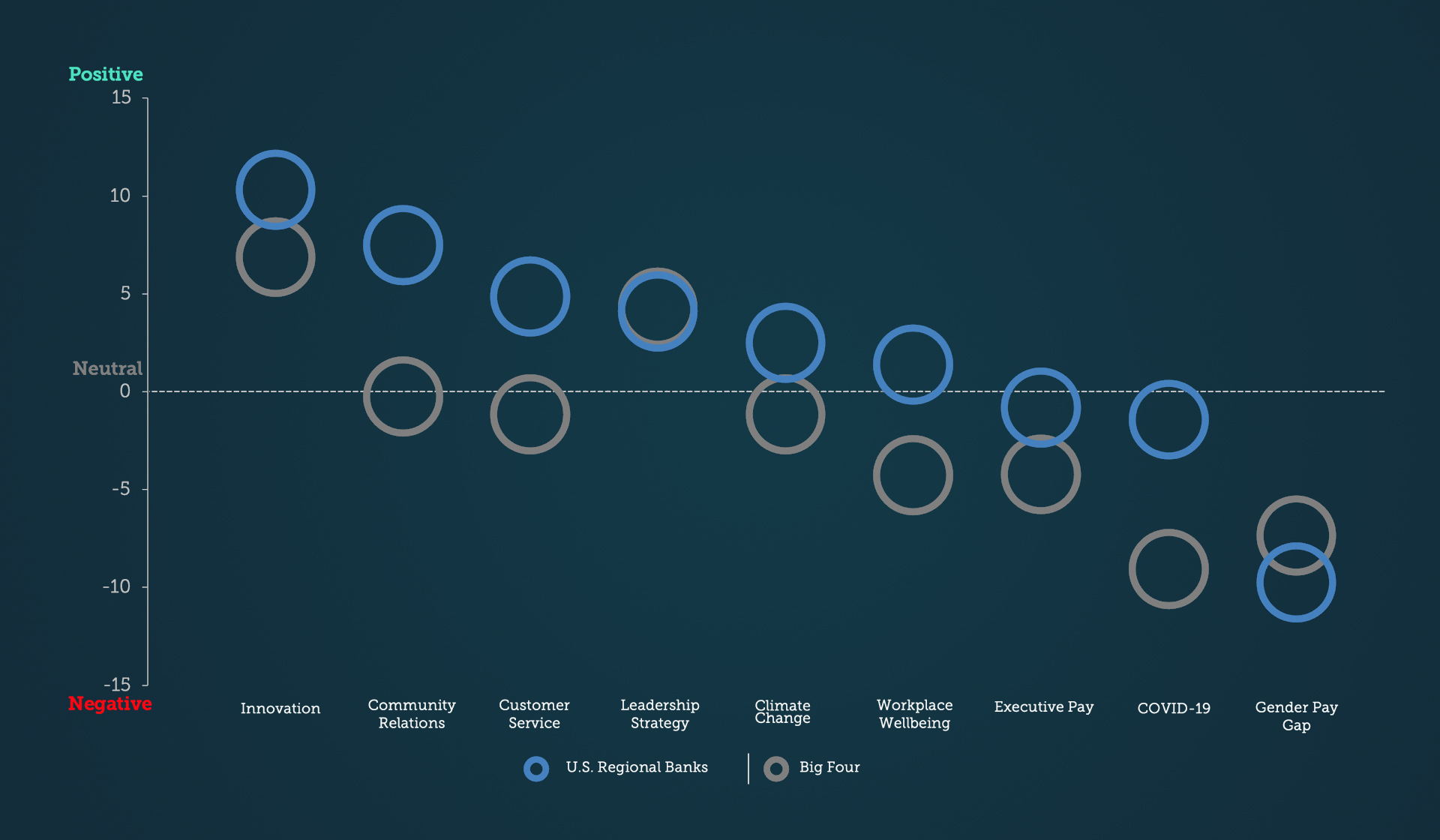 First, the regional banks outscore the big four on all but two issues: leadership strategy and the gender pay gap. In terms of leadership strategy, it’s likely that the performance of the big four here is a function of Corbat, Dimon, Moynihan, and Scharf simply being more visible than the CEOs of even the largest regional banks. Moreover, the delta between the two groups is minimal (0.2, on a scale of -100 to 100).

Regarding the gender pay gap, the largest banks have all led high-profile initiatives in this area – at the same time as the issue attracts the attention of activist investment groups such as Arjuna Capital – and all now produce gender pay gap reports (with varying results).

This means the regional banks outperform the big four on fully seven issues: innovation, community relations, customer service, climate change, workplace wellbeing, executive pay, and COVID-19 response. It’s perhaps unsurprising that this is the case for the more ‘human’ issues such as community relations and customer service, given that these are such a core part of the proposition of many regional banks. Similarly, one could make a case that it’s unsurprising to see the regionals ahead on climate change, simply based on the banks’ geographical footprints.

It’s interesting to see this as another way in which COVID-19 is acting as a catalyst for change. Much of the discussion of this dynamic has focused on the idea of the pandemic as an accelerator; McKinsey, for example, has characterized this as a “great acceleration of trends that existed,” highlighting areas such as online delivery, telehealth, online education, ‘nearshoring’ and remote work where the challenges of COVID-19 have pushed our society to a quicker adoption than might otherwise have been the case. In parallel, Forbes has discussed the notion of the acceleration of the future of work (notably, to a more people- and culture-centric concept).

What our analysis shows, however, is that not only is COVID-19 acting as an accelerant, it’s also a disruptor. On one level, assessing how major companies have shifted their activities to support frontline workers and the segments of society most impacted by the pandemic, we can see COVID-19 as having highlighted and altered the discussion around what community support looks like. This is likely to echo in the longer term as a change in the ESG / CSR priorities.

Going beyond that, however, we can see that COVID-19 is actually reframing the discussion of who’s good at what. It’s a disruption of competitive differentiation. The pandemic has not only pressed home the advantage that regional banks arguably have intrinsically regarding the more ‘human’ elements of their operations but also allowed them to shine in the more ‘macro’ areas, such as innovation, where the larger banks might historically have had an advantage.

The implication for banks is clear: given this disruption, do you know what your risks and opportunities are regarding your ‘evergreen’ communications platforms? They are likely not the same as before the onset of the pandemic. Many banks that we worked with earlier this year were laser-focused on quantifying the impact of their COVID-19 responses on their reputation, relative to their peers; leaders are now going beyond this to capture the wider picture, measuring how COVID-19 has reset their reputational strengths and weaknesses, to inform communications and corporate strategy going forward.

Corporate affairs and reputation in the new era