DSEI – the reputational winners and losers in the defence sector

DSEI, the Defence and Security event held in the Docklands, London from the 12th to 15th of September 2015 is a major event in the defence calendar, firms come from all over the world to demonstrate their most cutting edge technologies. alva has been tracking sentiment for the defence sector for the last four years and has analysed the reputational winners and losers from the event.

The graph below displays sentiment around some of the top performers at DSEI. All companies trended above  neutral, with the participants who achieved pre-event media coverage of their key technologies, such as BAE Systems and Northrop Grumman outperforming the rest of the sector by a significant margin (8%).

Graph showing sentiment around DSEI for some of the major companies in the defence industry. 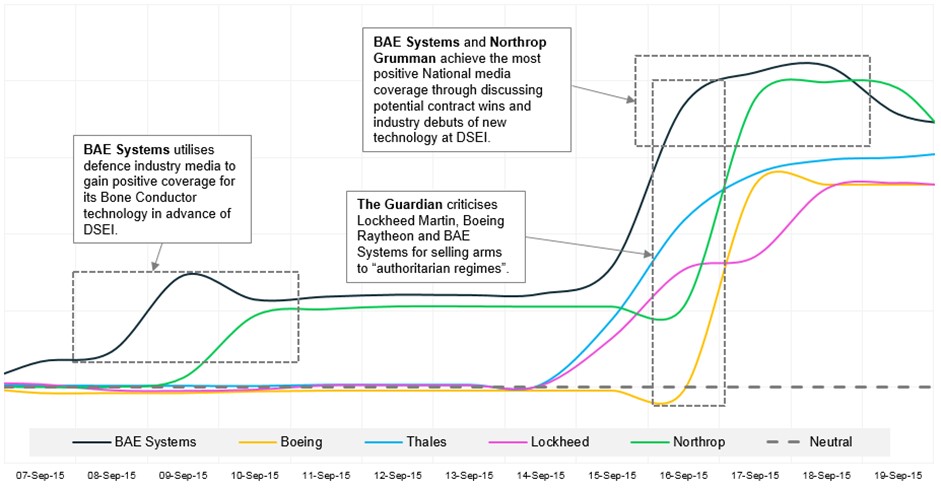 Reputations in the defence sector are increasingly being determined by technology

Whilst contract wins and coverage of global defence spending provide the baseline for media coverage in the defence sector, reputational out-performance is increasingly being defined by technology initiatives.

New strategic platforms that have major strategic or financial implications for the business, such as BAE Systems’ Taranis drone which begins final tests in September 2015, tend to be the primary drivers of positive sentiment. However, the most significant reputational gains can only be achieved by generating coverage outside of industry trade media.

At DSEI 2015, technologies that achieved the most coverage in national media sources, and thus generated the most significant impact, were those with either potential civilian applications or those which had a “futuristic” element to them. Both Northrop Grumman’s Next-generation Andros FX Robot and BAE Systems’ Battleview 360 project were able to play to these messaging strengths successfully.

The graph below shows the proportion of positive, negative and neutral coverage for some of the top performers at the event. All firms analysed generated significant positivity for their technology initiatives. However, scores for BAE Systems, Boeing and Lockheed Martin were all held back by negativity. 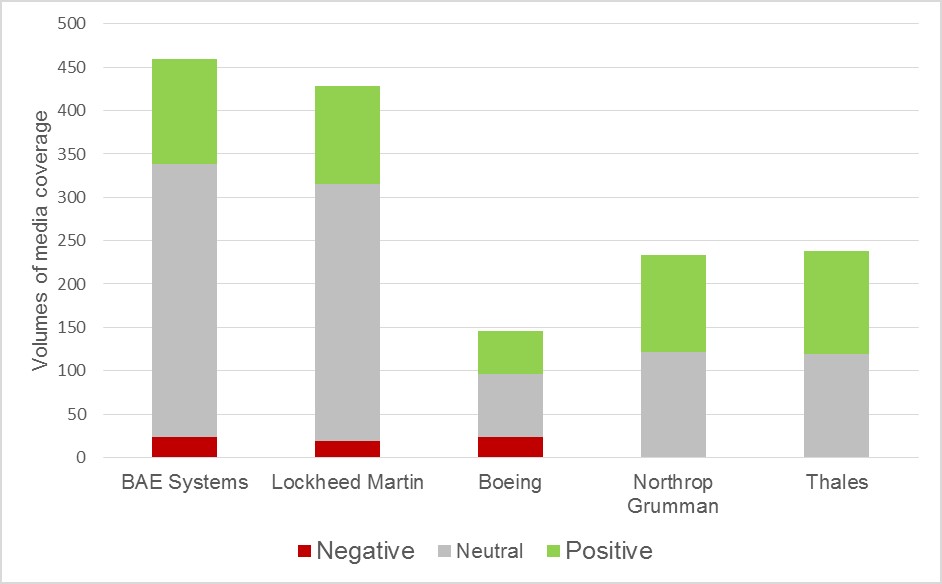 BAE Systems received some negative coverage, as legacy risks to reputation around dealings with “authoritarian regimes” were referenced by The Guardian and the company suffered through use of the StopDSEI hashtag on Twitter. Lockheed Martin suffered a minor reputational impact as activists protested outside the company’s London offices and Boeing was also damaged by social media as Twitter users accused the company of supplying combat aircraft and guided bombs to Israel.

Overall, DSEI boosted the reputations of all the firms analysed in the graphs above and negativity from legacy risks to reputation and activism did little to hold back overall performance. For communications and corporate affairs departments, maximising the media lifecycle of coverage through early campaigns, focusing on technologies with futuristic or civilian applications and promoting messages around protecting the safety of those in harm’s way are likely to be particularly effective in the future in maximising the reputational value of events such as DSEI.