Executive pay is a complicated and controversial topic, resulting in the potential for multiple reputational risks. According to the Economic Policy Institute, CEO compensation grew by 997.2% between 1978 and 2015 and this increase has fuelled concerns over the equitability of executive payouts from a growing number of institutional shareholders, politicians, business media and the public over recent years.

“For top bosses to rake in more in two days than their staff earn in a year is clearly unfair, disproportionate and doesn’t make social or economic sense. Politicians need to do more to stand up to big business and the super-rich. We must also give workers the power to force employers to share pay more fairly throughout their organisation.”

PwC’s research presents an alternative perspective highlighting the increasing number of companies whose CEO pay has been frozen:

“Remuneration committees are continuing to make tougher judgments on pay outcomes and coupled with greater scrutiny of performance targets, requirements to hold shares for longer and malus and clawback provisions, mean executive pay is now harder to earn than in the past”. Fiona Camenzuli, reward and employment partner at PwC.

Irrespective of whether executive pay is becoming more or less responsible, the fact is that it is a toxic issue. Over 67% of all content analysed by alva on executive pay is explicitly negative in sentiment.

For companies this is a challenge – the greater the public outrage, the more negative attention the organisation attracts and the greater the likelihood its remuneration proposals will be voted down.

However, the advantage of executive remuneration is that it is a relatively foreseeable risk – unlike other reputational risks, companies can predict when it is likely to become an issue and therefore planning and mitigation strategies are easier to mobilise and implement.

With that in mind, alva has harnessed its content analytics system to help companies understand what lessons there are in terms of planning for and responding to concerns over executive remuneration. This involved the analysis of over 100,000 pieces of content generated by traditional media (print, broadcast, online and subscription sources), social media (Twitter, forums, blogs and social media), surveys and analyst reports over the past six years.

This white paper seeks to answer the following questions:

Figure I. Executive pay for FTSE350 executives and employees over time

Given the differing opinions over the size and speed of increase in executive pay, it is informative to analyse the available data to understand whether changes in media and public focus on CEO pay correspond to changes in the pay itself. Put another way, does media and public scrutiny increase only when pay increases?

Above is a graph charting the rise in remuneration for FTS100 executives over the past eight years.

Alongside this, we can observe the amount of content dedicated to the issue of executive remuneration in publicly-available sources over a similar period. While pay levels have increased by 44.8% over the period, coverage levels have soared by 235%.

There is a clear disparity between the two, indicating that the concern about pay has decoupled from the reality of pay levels themselves.

In short, a point has been reached where executive pay is simply seen as excessive, irrespective of the size. 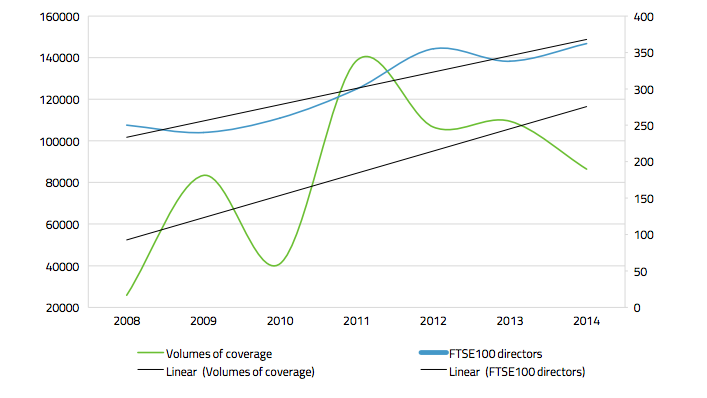 What this means for companies is that the debate is not solely grounded in facts and figures, but perceptions. The usual recourse to data and industry benchmarks is unlikely to be effective in this scenario. The belief is that pay is too high and the sums themselves cannot therefore be downplayed through relativity.

The emotive element of the story is a significant reputational risk amplifier for targeted companies. It means that antagonists are able to use emotive and personal criticism of organisations and individuals and these tactics are more likely to be considered “fair game”. This in part explains the propensity for newspaper coverage to characterise CEOs as “fat cats” while also publishing lifestyle details, family members’ social media accounts and other “personal” information in reporting.

With a data-focused argument less effective, organisations and their executives should be prepared for more personalised targeting. This can involve anything in the public domain about theirs and their family’s lifestyles, spending habits, planning applications and so forth. This type of information takes time to identify, audit and remove from harm’s way. Again, this is not something that can be quickly achieved in the middle of a crisis, but rather needs methodical planning well in advance of the AGM. 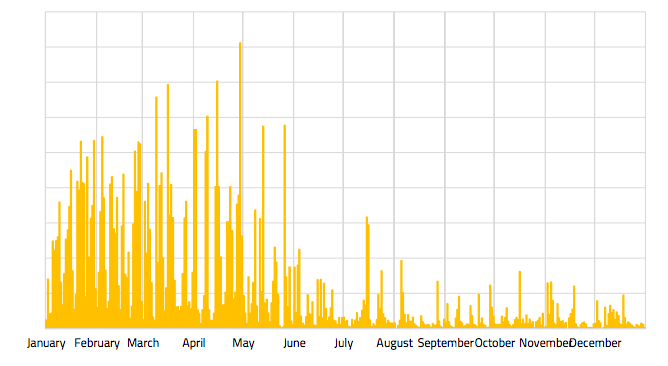 So how far in advance of the AGM should companies start planning their response?

Executive pay at least has the advantage over other reputational risks of being relatively predictable, at least in terms of timescales. The pay discussion centres on the company’s AGM with a very clear issue lifecycle.

Looking at all coverage pertaining to executive remuneration in 2015 in Figure IV, we can see this pattern playing out as expected. A growing focus on the issue throughout Q1 and Q2 with big spikes in coverage linked to individual company AGMs and pay votes. Q3 and Q4 by contrast see a drop-off in interest as the media and public agendas focus elsewhere.

What this means for companies is that it is often too late to start planning a response in Q1 – by then there is scrutiny on the organisation and it may already have become a target.

The lull in focus on the subject manifest in Q3 and Q4 presents a great opportunity for companies to get ahead of the issue through proactive planning and the construction of a mitigation strategy.

This approach can prevent organisations from falling into the trap of operating solely on crisis mode – often an inefficient, expensive and ineffective remedy.

What is noteworthy in Figure IV is the speed and timing of this focus; while many company AGMs are in April,the media and public focus on the issue starts pretty much from the beginning of January.

3. What makes organisations a target for negative executive pay coverage? 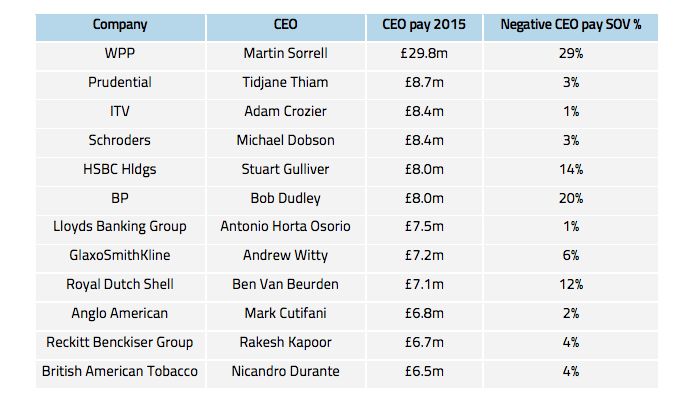 While the cyclical nature of the issue affords companies the opportunity to plan themselves ahead of the curb, what makes organisations a target can sometimes seem arbitrary. Why does one company receive negative attention, while a peer or competitor doesn’t?

Going back to the initial concerns expressed around “rising” and “disproportionate” executive pay, it may seem natural to equate size of CEO remuneration to level of attention.

Looking at 2015’s data disabuses us of that hypothesis with the second, third and fourth highest earners receiving much lower amounts of coverage than the fourth and fifth largest earners.

So if it’s not simply a case of the highest paid earners receiving the greatest attention, what are the other factors at play in determining whether a company is targeted over the issue? 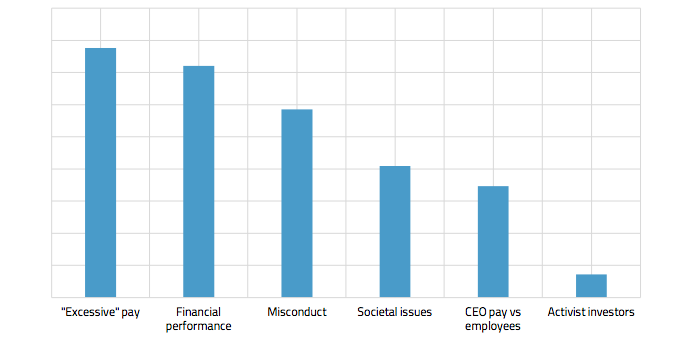 Our analysis shows that there are six key factors which are most commonly presented alongside reporting on executive remuneration.

Definitions and examples of these factors are presented in the table below. 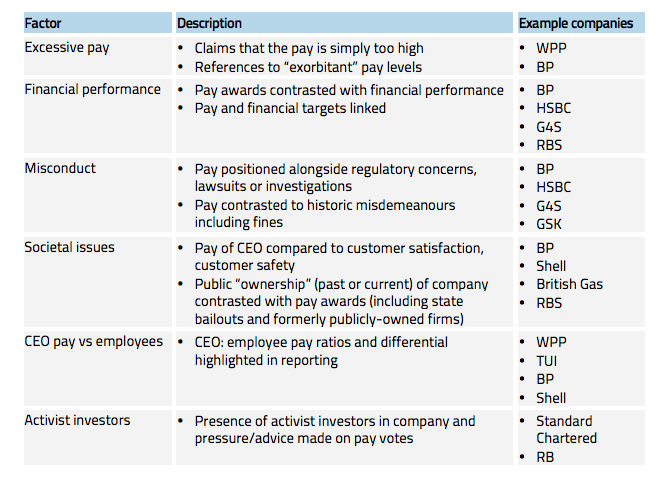 While size of pay is the single biggest contributing factor behind a company being targeted, accounting for 26.5% of all coverage, the five other factors combined contribute the remaining 73.5%.

Furthermore, the presence of more than one factor dramatically increases the likelihood that a company will be subject to public scrutiny, as demonstrated by WPP, BP and HSBC all of whom received disproportionate attention in 2015.

For companies, the advantage of this information is that it enables them to take an honest look at each of these factors to self-assess how many may apply to them.

Arewe involved in legal disputes orregulatory investigations? Are ourresults likely to miss expectations? What is our CEO: employee pay ratio and howdoes that compare?

Carrying out this self-assessment in the Q3-Q4 planning period enables a realistic expectation of what is likely to happen in the build-up to the AGM. Understanding this risk level can galvanise cross-company support for a coordinated response should the organisation be targeted. Forewarned is forearmed.

4. How can companies obtain early warning that they’ve been targeted?

So the self-assessment has been completed, mitigation plans have been drawn up in advance and all relevant teams are briefed. It’s January now, with the AGM in mid-April. How do organisations know as early as possible when to deploy their plans? When is the point at which they have become a target?

Unfortunately for many, this point is when the Financial Times article lands on the CEO’s desk.

Once again, analytics can provide a solution by bringing greater clarity and rigour to this situation.

Figure VII charts the different levels of attention received by targeted and untargeted companies in the run-up to their AGMs.

As highlighted in section 2, the focus can arrive as early as the beginning of the year. In Figure VII, the beginning of February marks the start of a significant divergence in attention, which acts as a quantitative trigger signalling that the risk threshold has been breached.

Armed with this quantitative reporting, companies can know on a daily basis whether reporting on their executive remuneration has reached “targeted” level. Once it has, the plans drawn up in Q3-Q4 can be deployed.

Essentially this is a stakeholder mapping exercise, assessing existing company antagonists as well as particular influencers on the subject of executive remuneration.

Monitoring plays a key role again – tracking the activity of the key influencers identified alongside not just your own organisation, but also peers, competitors and companies further ahead of yours in the results calendar.

Having a monitoring system in place which provides both the quantitative and qualitative perspectives removes the need to rely solely on “gut feel” to determine when to act. It also enables a much earlier response which can prevent escalation of a threat.

1. Facts and perceptions: Executive pay as an issue has reached a point where the perceptions of the payout has outstripped the actual increase in pay levels themselves. Executive pay is simply seen as excessive across the board.

2. Executive pay is an emotive issue: The perception of executive pay is highly-charged and emotive; individuals are at risk of being targeted personally. This necessitates a more thorough planning phase to audit and manage potential personal risks for executives.

3. Foreseeable reputational risks can be planned for: Executive pay should not come as a surprise, but companies are still caught out by it. Use its cyclical nature to plan mitigation strategies in Q3 and Q4 to move from crisis response to proactive management.

4. Rate your target likelihood: There are clear factors which increase the likelihood of an organisation being targeted. These range from the size of pay, to financial results and pay rations. By honestly assessing where they stand on each of these, companies can better understand whether they will be targeted.

5. Implement an early warning system:  There’s no point having a fantastic mitigation strategy designed if it’s only deployed once the story has broken. Companies should monitor their risk factors to deploy their mitigation before they have been targeted. 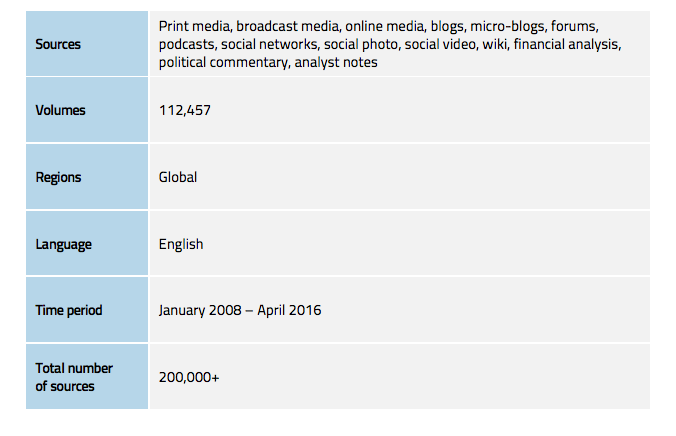