Executive pay is a complicated, controversial – and, at times, toxic issue. It is probably not surprising to learn that 67% of all content analysed by alva on executive pay is explicitly negative in sentiment.

For companies this is a challenge. The greater the public outrage, the more negative attention the organisation attracts and the greater the likelihood its remuneration proposals will be voted down.

From an individual executive’s point of view, negative attention on pay packages invariably translates into scrutiny of private lives. This can be distressing, disconcerting and distracting for both the executive and the business.

In November 2015, the UK Government published a Green Paper on Corporate Governance Reform. The Government’s paper is designed to ensure executive pay is properly aligned to long term performance, to give a greater voice to other stakeholders (employees and consumers) and to discuss the merits of extending this to large privately held companies.

Executive pay is clearly an issue which will come under greater scrutiny from the government and the media in the next few years.

The advantage of executive remuneration is that it is a relatively foreseeable risk. Unlike other reputational challenges, companies can predict when it is likely to become an issue and therefore planning and mitigation strategies are easier to mobilise and implement.

We have outlined the key factors that drive a targeted campaign on executive pay, how to identify it at an early stage and how to proactively plan for it.

This paper is an update to alva’s Executive Pay White Paper, released in April 2016. For this 2017 version of the Paper alva has teamed up with an international reputation and privacy consultancy.

Using our leading-edge reputation intelligence capability, we have updated our insights, analysis and recommendations on the topic of executive pay.

Our partners have added practical advice on the topic, based on 30 years’ experience of helping protect the privacy and reputations of the world’s most successful individuals and leading companies.

Given the differing opinions over the size and speed of increase in executive pay, it is informative to analyse the available data to understand whether changes in media and public focus on CEO pay correspond to changes in the pay itself. Put another way, does media and public scrutiny increase only when pay increases?

Figure I below is a graph charting the rise in remuneration for FTSE100 executives over the past eight years.

Alongside this, we can observe in Figure II the amount of content dedicated to the issue of executive remuneration in publicly-available sources over a similar period.

While pay levels have increased by 44.8% over the period, coverage levels have soared by 235%.

There is a clear disparity between the two, indicating that the concern about pay has decoupled from the reality of pay levels themselves.

Media coverage of executive pay follows a recurring three phase pattern each year that can be predicted and planned for.

Executive pay has the advantage of being relatively predictable because the pay discussion centres on the company’s AGM with a very clear issue lifecycle.

Based on volume of executive pay issues in the media we can see a pattern playing out each calendar year in three stages:

What this means for companies is that it is often too late to start planning a response in Q1 – by then there is scrutiny on the organisation and it may already have become a target. A company should take advantage of the lull in interest in executive pay in the summer and autumn to plan and prepare for this reputational issue.

This approach can prevent organisations from falling into the trap of operating solely in crisis mode – often an inefficient, expensive and ineffective remedy. 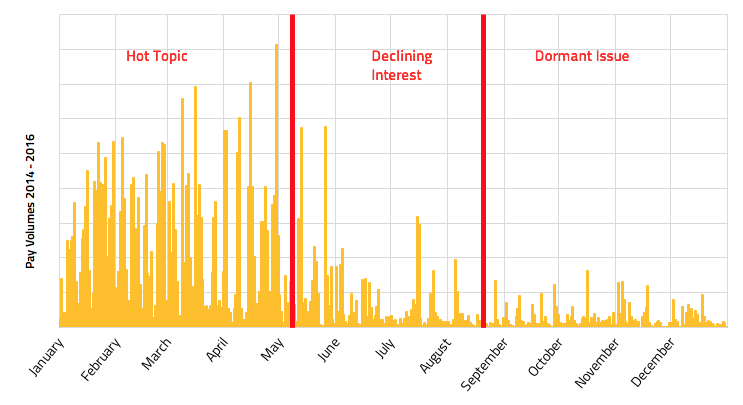 Other factors are important in determining whether a company is likely to become a target.

Research indicates that it’s not simply the case that the highest paid earners receive the greatest attention. There are other factors at play in determining whether a company is targeted over the issue.

As the chart below shows, we have examined 12 CEOs’ pay against their negative “share of voice” in the media. What is clear is that the two do not correlate. 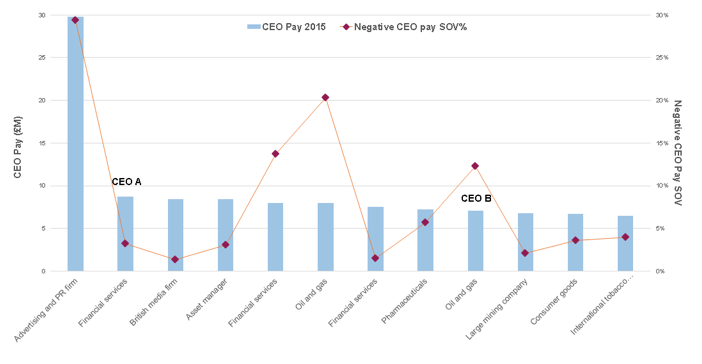 Why is CEO A faring better than CEO B? The size of pay accounts for 26.5% of all coverage but the combination of five other factors contribute the remaining 73.5%. It is these other factors that will influence negative share of voice.

Analysis of the factors which are commonly presented alongside reporting on executive remuneration (and therefore factors which increase the likelihood a company will become a target) are as follows:

The presence of more than one factor dramatically increases the likelihood that a company will be subject to public scrutiny. All of the top five most negatively covered companies for executive pay had a least two of the five factors present, with several containing three or more. One company had all five factors present.

These factors are particularly pertinent given proposed reforms as set out by the government Green Paper.

One of the proposals under discussion is whether companies should publish ratios comparing CEO pay. This would be used as a metric to compare companies, particularly over the same sector and a means of establishing trends. Publication of this ratio has been a requirement in the US from January 2017.

Analytics can act as an early warning indicator that a company is the subject of a campaign.

The chart below shows the different levels of attention received by targeted and untargeted companies in the run-up to their AGMs. The start of a significant divergence in attention acts as a quantitative trigger, signalling that the risk threshold has been breached.

Armed with quantitative analysis, companies can determine on a daily basis whether reporting on their executive remuneration has reached “targeted” level. Once it has, the plans drawn up in Q3 and Q4 can be deployed. 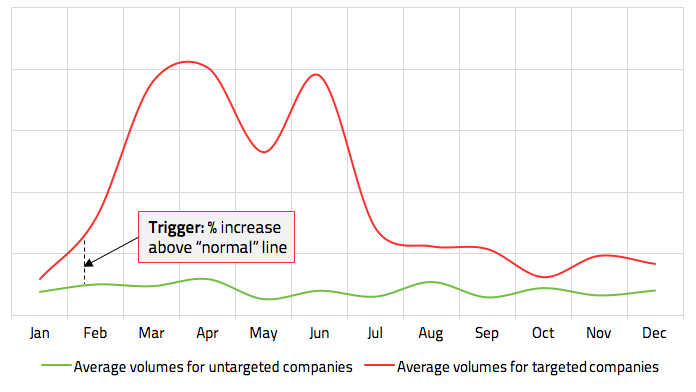 The perception of executive pay is highly-charged and emotive; individuals are at risk of being targeted personally and this has privacy and security implications for their families.

This is intrinsically linked to increased availability of executives’ personal information and lifestyles.

What might be driving this trend? Two of the key contributing factors are:

Therefore, the “executive pay” story is one that can be amplified by reference to the executive and their family’s lifestyle, spending habits, planning applications and so on.

Executives can mitigate the threat by making themselves an unattractive target. Start with a risk assessment on what is available. A good way to think about the content is the five Ps: posts, profiles, pictures, public records and private records.

While some of the content is required to be made public (for example disclosure in financial statements, company appointments or land ownership records) much of it is superfluous and unnecessary (Instagram photos, tweets).

Executives are usually surprised to find how much information is available on them and their families and the extent to which this can legitimately be removed. 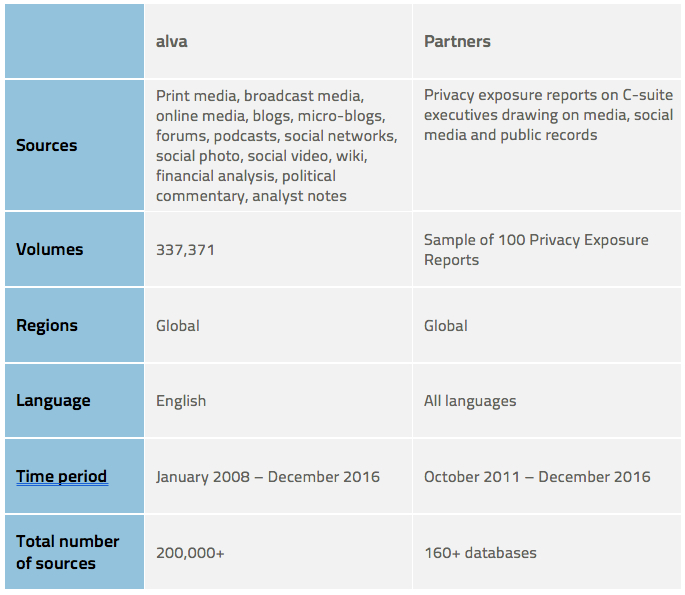 AGM Questioning: How to predict and prepare for the key issues