The Farnborough International Airshow 2016 (FIA) took place from the 11th – 17th of July, with many major players in the aerospace and defence sectors demonstrating their latest technologies, signing agreements for orders, partnerships and acquisitions and announcing future strategic and investment plans.

The event provides opportunities for communications and corporate affairs teams to capitalise on the attention of the international media as it focuses on the defence and aerospace sectors’ technologies, innovations and strategies, but what can be learned from this year’s event?

This analysis will look to answer three questions:

To answer these questions, alva analysed over 48,000 pieces of publicly available content referencing the Farnborough International Airshow in relation to any of 13 defence companies. 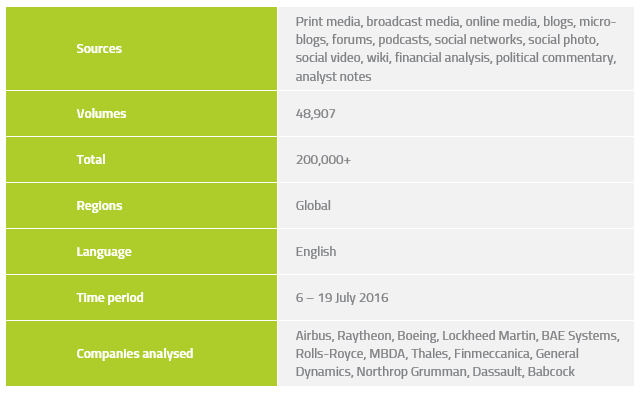 Which were the best aerospace and defence companies at Farnborough International Airshow 2016?

All scores are well above the 5.50 neutral point, indicating that the event was highly positive for companies in the defence sector and worked to boost sentiment.

Boeing and Airbus attracted the vast majority of the coverage at Farnborough, translating this into the highest sentiment scores, meaning they ranked as the best aerospace and defence companies at the event.

The table also shows the share of voice of all Farnborough International Airshow coverage, demonstrating that scores closely correlated with share of coverage. However, compared to all 13 companies analysed, Thales and Rolls-Royce both scored higher than other companies despite receiving a smaller share of voice, indicating that the smaller amount of coverage had a larger positive impact. This presents an interesting question of what drove positivity and what positive coverage was most impactful.

What were the top issues driving positivity?

Using alva’s issue taxonomy, we were able to investigate which particular issues were driving positivity for these companies.

Contracts wins were the most impactful driver of Farnborough International Airshow positivity across all companies. 16% of contract-related content related to David Cameron’s announcement that the UK Government would buy nine new P8 maritime patrol aircraft from Boeing in a £1.5bn contract. The announcement also included details of job and investment plans. In addition, AirAsia agreed to buy 100 planes from Airbus in a $12.6bn deal widely reported across international media. Rolls-Royce won a £693m order from Virgin Atlantic for Trent XWB engines and long term services for 12 Airbus A350-1000 aircraft.

Airbus and Boeing dominated coverage of contracts, receiving the most positivity around the issue and show international recognition can play an important role in driving positivity.

Innovation was the second key driver of positivity as coverage highlighted new technologies that were shown at the event. Lockheed Martin’s F-35 fighter jet generated the largest impact, accounting for over 20% of innovation content. On its international debut the jet was described as the “star attraction” of Farnborough Airshow and was praised for its ability to take-off from a shorter runway than conventional jets and land vertically like a helicopter. Boeing also received positivity for its Boeing 737 MAX plane after demonstrating a “zero gravity” freefall which was described as “jaw-dropping”. Overall, coverage of landmark platforms such as the F-35 and crowd pleasing technologies such as the 737 MAX generated the most positivity.

Job creation was a more unexpected driver of positivity, especially within the context of uncertainty around Brexit. Over 95% of jobs positivity was around Boeing confirming plans to create 2,000 new jobs in the UK as part of an R&D partnership with the UK Government. Interestingly, over 40% of coverage around Boeing’s announcement was from non-UK media, coming through in sources including The New York Times and Business Times Singapore. Also creating jobs positivity was Marillyn Hewson, Chief Executive of Lockheed Martin, who said the company may invest more in the UK in light of Brexit as exporting from the UK could become more attractive, aided by the fall in sterling, with coverage referencing the company expanding its Ampthill facility by adding 40 jobs.

Content related to M&A activities made up 8% of impactful coverage, largely driven by coverage of Leanne Caret, Chief Executive of the Boeing’s Defence, Space & Security division, saying the company is always looking at bolt-on acquisitions across business areas and possible opportunities to expand its business. Rolls-Royce announced at the event that it will be purchasing a 53.1% shareholding in Industria de Turbo Propulsores. Overall, M&A content tended to reinforce investor optimism around the financial future of each of the companies.

Many companies won positivity as new technologies succeeded in testing stages. For example, 11% of positivity related to Thales and Textron Systems’ announcement that the Fury lightweight precision guided glide weapon from the Shadow Tactical Unmanned Aircraft System succeeded in tests against static vehicle targets. In addition, Boeing’s KC-46A refuelling plane successfully transferred fuel to an F-16 fighter jet and a C-17 cargo plane using a modified boom, with the technology generating praise from the US Air Force.

In a retrospective of the Farnborough International Airshow 2016, alva found the following

*Footnote: The methodology – how do we calculate sentiment scores?

The alva algorithm calculates sentiment scores out of 10, where a score of 5.50 is considered neutral. The algorithm takes into account the volume, influence, prominence and relevance of real-time mentions from 80,000+ news sources, more than 3m blogs and forums, 100+ social networks. A score above 6.00 is considered strong, while a score below 5.00 is considered weak.

The Open vs. Closed business dichotomy