FMCG and the war against plastics: do they rise and fall as one?

In the UK, concern around plastic pollution has grown seemingly exponentially in the last twelve months, due in part to initiatives like Sky’s Ocean Rescue, the airing of Blue Planet II and a wider European regulatory push towards banning single-use plastic products.

Table 1: Discussion of Sugar and Plastics in the UK 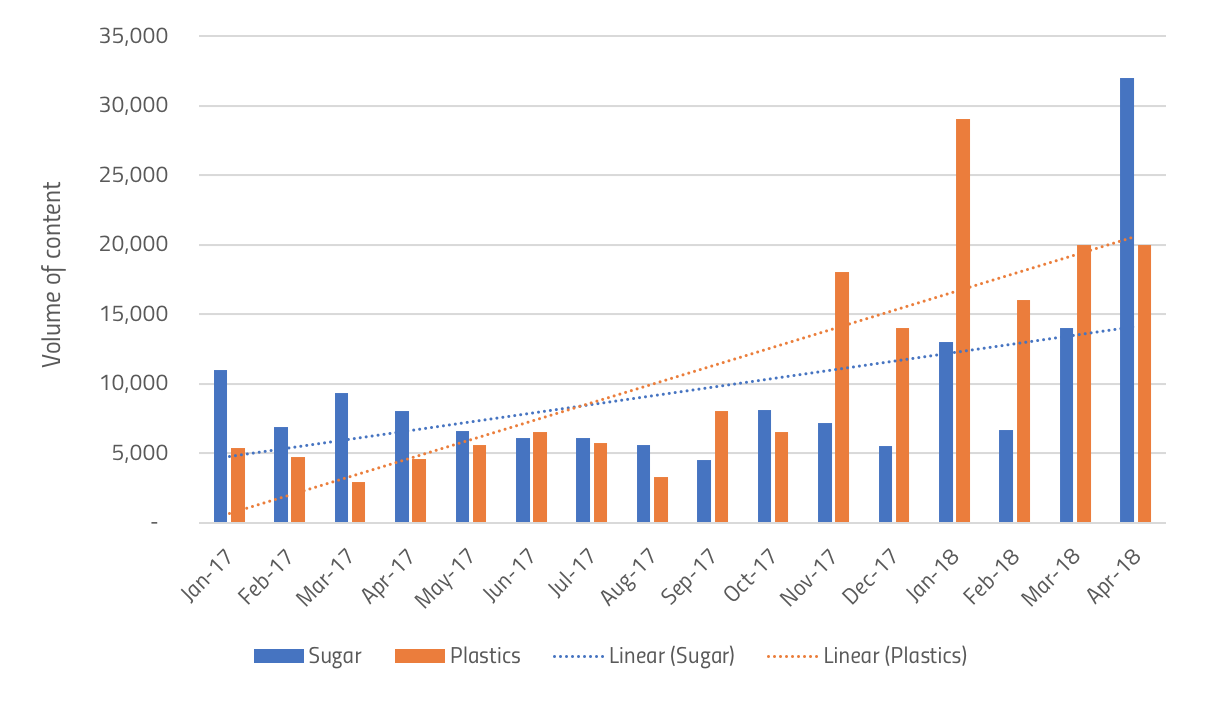 Indeed, in the UK, discussion of plastics has increased by nearly four times in the first four months of 2018 from 2017, while sugar discussion only increased by 87% despite the enaction of the soft drinks levy in April. Globally, the picture is made clearer – discussion of sugar in relation to health has marginally decreased year-on-year, while plastics conversation has jumped by 210%.

Reaction to joining this pact has generally been positive, but is there a company that stands out as currently winning the “war on plastics”?

Blue Planet II as a catalyst for public concern around plastic

As a first look, we have analysed FMCG companies in the UK to understand which business has garnered the most media plaudits and public support for its stance on plastics.

Taking another look at the graph above, discussion around plastics jumps in line with the release of Blue Planet II in the UK – the programme’s first episode aired at the end of October 2017, and its emotionally charged finale aired in January. Given that this programme appears to have been the major catalyst of public concern around plastic waste, we have decided to look at how companies’ sentiment compares pre-Blue Planet to post-Blue Planet.

The best performing company in the lead-up to the Blue Planet premiere was P&G, thanks largely to the launch of its Fairy Ocean Plastic Bottle, used by the business to emphasise its “totally new supply chain and approach” to including post-consumer recycled and ocean plastic in production. For P&G, discussion was limited primarily to sustainability and trade press, without much mainstream media attention – which meant that though P&G’s launch led to a single peak in positivity October 2017, it did not have a sustained positive impact on the company’s public profile.

Post-Blue Planet, who is having the most impact around plastic?

Sentiment towards the largest FMCG companies – including P&G – around plastic declined after the release of Blue Planet II, indicating that they face greater collective scrutiny now that the documentary series has raised the public profile of this issue.

However, a commitment similar to P&G’s drove Unilever to the top of the (overall lower) rankings in Q1. The company announced in February that it was moving to plastic-free teabags for PG Tips.

The key difference between this announcement and that of P&G was that Unilever’s commitment received coverage in every national paper, likely thanks to increased interest in plastics among the public. And in addition to the immediate commitment made around PG Tips, the company promised to make teabags across all its brands plastic-free by the end of 2018.

In the following months, Unilever then also sustained positive perceptions by announcing its work innovating around closed-loop, food-grade plastic packaging, as well as its participation in the UK’s On-Pack Recycling Label scheme.

P&G, which had drummed up a first-mover advantage towards the end of last year, could have potentially rivalled Unilever’s subsequent positivity by revisiting the Fairy bottle commitment it made before Blue Planet aired. This strategy could have highlighted that P&G had proactively made a commitment around plastics rather than reacting to the uptick in public interest.

Interestingly, while the most well-recognised FMCG names declined in performance post-Blue Planet, other, more specialised, manufacturers capitalised on positivity around their plastics initiatives in recent months. Henkel, Muller and 2 Sisters Food Group jumped up in the ranking thanks to all three making investments in the sustainability of the plastics supply chain. These companies benefitted more than posterchild multinationals because they tended to escape the naughty lists of campaigners and the media.

This pattern points to an important trend – individual company action is well-received but, to a degree, the sector rises or falls together around plastics: the majority of critical coverage, as well as the most positive, tends to list several companies all perceived in the same way. In the public – and the media’s – eye, cooperation between companies is necessary to ensure tangible, widespread change.

It is for this reason that companies that have signed the UK Plastics Pact saw a jump in positivity last month. They are being seen to work together in an “unlikely alliance” for the greater good.

In this environment, businesses must be aware not only of government, regulators and consumers, but of building relations within the sector to effect real change.

In this context, it then makes sense that Unilever has pulled out ahead of peers in recent months. The company made a major product announcement well-timed with the rise of public concern, it followed this announcement with evidence of further, long-term commitment to sustainable plastics and it also demonstrated sector cooperation by signing the Plastics Pact.

By highlighting individual commitments while collaborating with the wider industry, FMCG companies can effectively demonstrate commitment to a healthier planet.

We saw a similar lack of differentiation at the inception of the “sugar debate”, as campaigner criticism was directed at the food and beverage sector as a whole.

As individual companies responded in different ways, and with the onset of legislation announced, however, we saw a much greater spread in stakeholder perception.

It may be that as the plastics issue evolves, we see a similar spread in both company response and public reaction.

Audi CEO Arrest: Could other corporations be at risk of Reputation Contagion?

GDPR: An opportunity for Corporate Affairs?