How fuel poverty is changing the reputation of utilities

The reputation of the UK utilities market has been under fire from a broad range of stakeholders in recent years. Criticism has been wide-ranging, but the common thread is a perception that the largest companies (the Big Six) are not acting in the best interest of their broader stakeholders. Customers, industry watchdogs and the media have been critical of savings in wholesale energy prices not being passed onto consumers while there is a cyclical concern over the impact of fuel poverty on society’s most vulnerable, an issue championed by local MPs, NGOs and the media.

These diverse challenges have seen the sector’s reputation fall to 5.72* in alva’s sentiment score, consistently underperforming other consumer-facing industries such as FMCG (5.81)* and Hotel & Leisure (6.14)*.

As alva’s content analytics has previously shown, a poor reputation among multiple stakeholders is usually the spur for regulatory intervention and the Competition & Markets Authority’s inquiry into the UK utilities market could have significant implications in disrupting the alleged oligopoly of the Big Six. Apparently taking lessons from the banking sector, the CMA is reviewing introducing measures which would see consumers forced to choose a new energy provider every year under proposals to ban indefinite standard tariffs, increasing competition and the potential for challenger brands such as First Utility and Good Energy to increase market share.

UK utilities are at a significant juncture: the sector has suffered significant reputational damage and with regulation potentially making it easier for customers to switch providers, the Big Six are also more vulnerable to customers leaving than they have been previously. Now more than ever, reputation is a key determinant of both differentiation and, by extension, customer retention and growth for UK utilities.

With fuel poverty one of the key charges laid at the industry’s door and Met Office meteorologists predicting that this winter could be the coldest on record, the issue has the potential to generate more media coverage and to have a greater impact on stakeholder perceptions in 2015-16.

alva analysed all publicly-available content over the past 20 months for nine companies to understand public discussion around fuel poverty and how the efforts of major utilities to address the issue have influenced perceptions.

The graph below shows sentiment around discussion of fuel poverty in conjunction with the major UK utilities over the past 20 months. Significant peaks in media coverage over 2014 primarily related to regulatory criticism of the Big Six for their impact in increasing the end cost of energy. 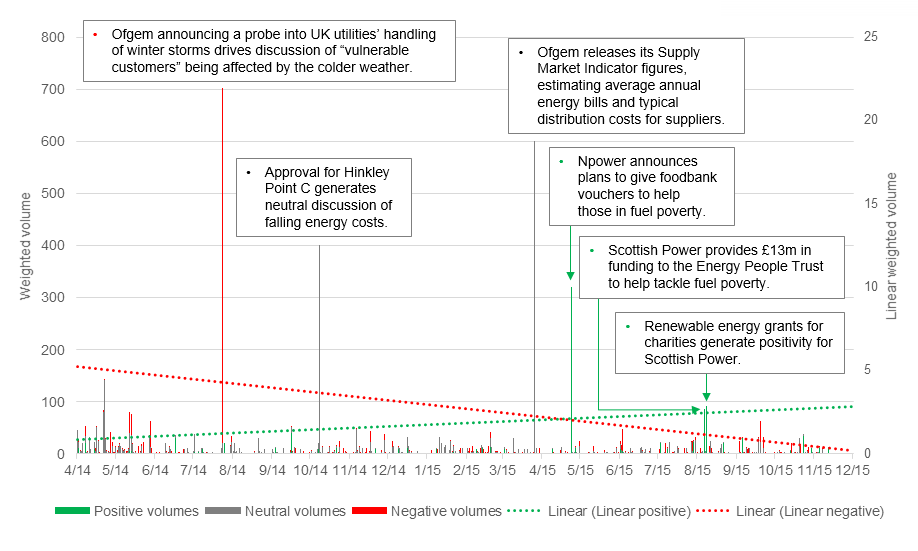 In contrast, 2015 paints a different picture, with utilities companies actively promoting their efforts to give back to society and to look after those that are vulnerable. Overall, positive discussion of energy companies and fuel poverty trended upwards, whilst negativity is in decline.

Whilst the Big Six energy suppliers appear to have taken a more proactive approach to the issue this year, challenger brands such as Ovo Energy have apparently identified this as a reputation opportunity and also dramatically increased their communications around the issue.

The graph below shows positive discussion of fuel poverty across all UK publicly-available sources in conjunction with the Big Six and three of the fastest growing challenger brands. RWE npower shows the most pronounced improvement, with positive visibility increasing tenfold through the company’s foodbank voucher initiative. E.On and EDF also made strong gains in 2015, although both admittedly started from a relatively low base.

Figure II: Positive discussion of fuel poverty per company 2014 vs 2015 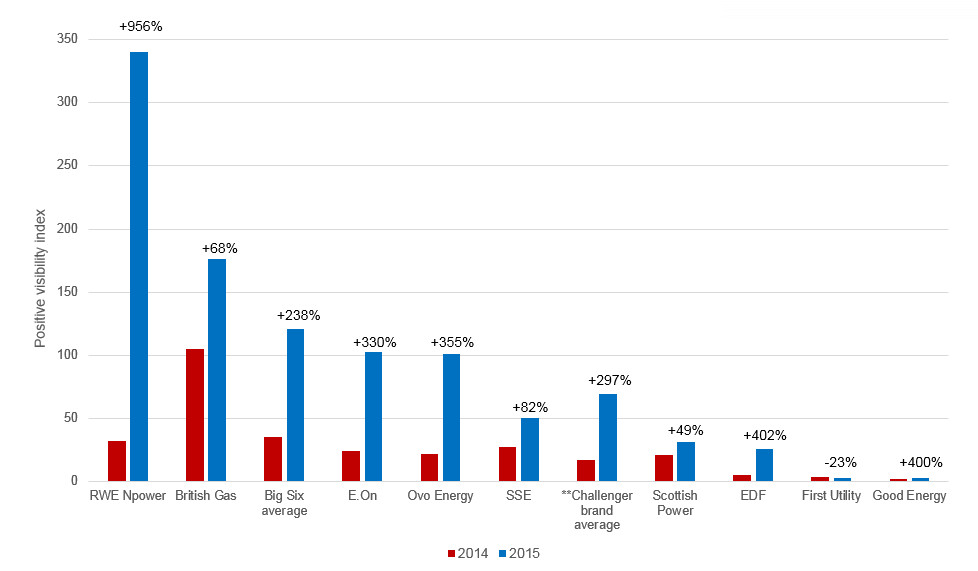 As fuel poverty assumes greater importance in determining company reputation, and almost all companies analysed increase their proactive messaging around the issue, alva sees the following factors as critical in determining the landscape of the UK utilities market in future years:

The above factors all have the potential to drive consumer and regulatory decisions in the utilities sector. Those companies that are mindful of these macro shifts in consumer perceptions and utilise the opportunity to write a narrative around themselves as contributing to the public good stand to be best insulated from external reputational risks and best positioned to attract new customers in coming years.

*Scores relate to October 2015 average scores for each sector. alva scores sentiment from 1-10 with 5.50 being the neutral point.

**The challenger brand average has been normalised for the number of companies analysed in order to provide a fair comparison with the Big Six average.

What are the reputational risks associated with clinical trial transparency in the public sphere?