Gatwick or Heathrow expansion: Is the choice Obvious?

The decision over where to construct a new London runway is one which has been played out in the public eye, with both Gatwick and Heathrow attempting to foster support among businesses, politicians, local communities, the media and the general public via increasingly visible rival campaigns.

Given the very open nature of the debate, we thought it would be insightful to look at the net effect of all publically-available content (national, regional, online, trade and consumer media as well as Twitter, Facebook, blogs and forums) for the two airports to try to understand: a) which airport has the better overall reputation? and b) which has fared better in the month and a half since the Commission’s recommendation?

Key findings from our analysis are: 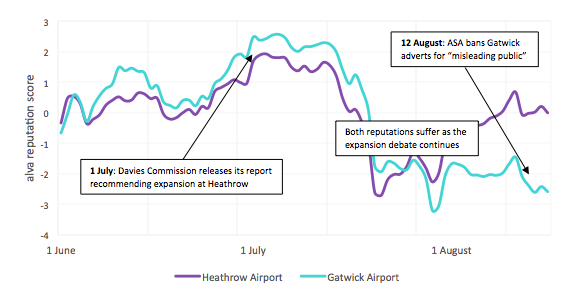 alva’s reputation tracker shows that in in June, Gatwick enjoyed a more positive reputation than Heathrow – bolstered by its proactive messaging around growth and the support of local politicians.

In June, leading up to the report’s release, Gatwick took a much more proactive approach than Heathrow in its expansion “marketing”, with company executives making several public statements positioning Gatwick as the best choice. Gatwick officials including Chairman Sir Roy McNulty and CFO Nick Dunn made public statements assuaging fears around potential loss of “key business routes” within the UK and pointing to the airport’s strong financial results and passenger growth as proof that Gatwick “remains the best choice” for expansion.

On the other hand, Heathrow garnered more negativity ahead of the Davies Commission release. Ravi Govindia, councillor from Wandsworth and chairman of the “2M” group opposed to Heathrow expansion, claimed that pollution would “soar” if the airport were to build a new runway. And Gatwick itself released a report arguing that a third runway at Heathrow would cost £500m more than originally estimated because of necessary landfill clear-up.

Gatwick’s proactivity appeared to work well for it, resulting in a stronger reputation in the lead-up to the report’s publication.

The publication of the Davies report finding in favour of Heathrow was met with strong opposition from many Conservative MPs, London mayoral candidates and environmental groups. This ensured that Gatwick maintained its reputational advantage over Heathrow, despite losing out in the report.

Both airports’ reputations suffered in the two weeks following the report’s release with the focus moving towards the disadvantages of both proposals. Heathrow faced protests from activist group Plane Stupid, and Gatwick’s chief executive was portrayed as “lashing out” at the Davies report, while Heathrow chief exec John Holland-Kaye fed into criticism of the drawn-out debate by asking his rival CEO to “get on with it”, as “the debate is over”.

At the beginning of August, Gatwick and Heathrow switched places, with Heathrow’s reputation overtaking that of Gatwick.

Aiding this was the Advertising Standards Authority’s ban on two of Gatwick’s pro-expansion advertisements. The ASA ruled that Gatwick’s claims that noise pollution would affect “320,000 additional people” should a new runway be built at Heathrow, while impacting only 18,000 at Gatwick was misleading, as the advertisement failed to cite the source of this data.

Here we saw Gatwick’s proactive expansion marketing backfire, with national media sources framing the airport as purposely misleading the public – casting doubt on the credentials of other Gatwick expansion research and the airport as the “better choice”. Given how effective this approach had been for Gatwick, there is a risk that future campaigns may be less credible and therefore less successful in garnering stakeholder support.

This recent turn of events should not be seen as the conclusion of this story – criticism of Lord Davies and the credibility of the Davies Commission continues, and, with the government’s ultimate decision yet to be revealed, it remains to be seen which London transport hub will make the most of this ongoing exposure.

One thing that is certain is that the support of stakeholders is fickle and therefore subject to change. The ultimate winner in this contest will be the one which has most effectively harnessed the various public and private channels to both understand and respond to the needs of businesses, politicians, local communities, the media and the general public on this issue.

The “death of cheap mortgages”: are banks prepared for the reputation challenges?

Supplier payment: Is it a risk to your business?