Help to Buy ISAs: which banks are benefitting most?

Coming to the end of the 2015/16 tax year, a new personal savings allowance – the Help to Buy ISA – is available for first time homebuyers in the UK.

Standard ISAs had previously been a key product for banks looking to boost new customer acquisition, but some commentators believe that George Osborne’s introduction of a new tax free savings allowance has “killed the ISA”. The one exception to this is the Help to Buy ISA which has been described as a “no-brainer” for those that qualify.

With a potentially important new battleground opening up, alva analysed banks’ savings product content in the months following the announcement of the scheme, December 2015-March 2016 to understand:

Which bank is benefiting most from the Help to Buy ISA?

In general, the launch of the ISA has been met with praise from both industry critics and influencers.

The figures below show that Halifax have received the most coverage for their Help to Buy ISA offering. In fact, the amount of positive content they received was equal to the other three featured banks combined. This positive coverage resulted in an 81% boost to their overall savings sentiment score, more than double the impact of the next closest bank, Nationwide. 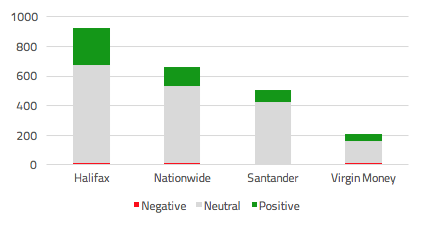 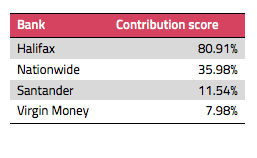 What factors are generating most coverage for the banks?

Halifax is disproportionately benefiting from the Help to Buy ISA. It received a contribution of 80.91% towards its competitive gap versus the average, as well as the most discussions among the banks analysed. The main reason for this is that it positioned itself as the early market leader for interest rates. This ensured that the bank was regularly referenced in general media coverage, as well as getting promoted by influencers like Martin Lewis, who praised Halifax for its “market-leading” 4% rate.

Nationwide received positive coverage for allowing customers to hold a cash ISA as well as a Help to Buy ISA, enabling them to take advantage of the full tax-free allowance. In addition to this, the £1,750 cashback on its Save to Buy Mortgage range of products contributed to 36% of its competitive gap versus the sector average, helping to place it as the top ranked bank for overall savings sentiment.

While Santander currently match Halifax’s 4% market leading interest rate offering, this was only announced in mid-March. This meant that Halifax was the bank referenced in most of the early coverage at a point when Santander’s offering was only 1.5%. This resulted in Santander being largely overlooked initially and it is still playing catch-up. However, there is potential for Santander to recover strongly as its offering currently tops moneysavingexpert.com’s recommendations.

Despite offering a competitive 3% interest rate on its offering, Virgin Money’s lack of differentiation has seen it struggle for visibility. One area that has received some positive coverage is its Save to Buy account which could be a way to leverage more awareness.

How can banks further promote their Help to Buy ISA?

The announcement of the scheme received significant mainstream coverage. However, a lot of this content focused on introducing the concept and explaining how it works to the public. Due to this there has been limited opportunities for banks to influence discussions. 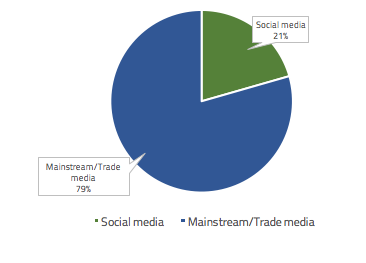 Although social conversations only account for around a fifth of total conversations, this could be a key channel for influencing potential consumers.

Social media users may traditionally have been a younger demographic, but many have now matured into prospective first-time homebuyers. This means that social channels provide a strong opportunity for banks to reach these digital natives and influence purchasing decisions.

While not all banks can position themselves as interest-rate market-leader, the social channel is a vital source for putting forward the benefits of their offering and influencing the target demographic.

Not every UK retail bank currently offers a Help to Buy ISA but we have seen that those that do are generating a good response. This presents an opportunity to boost their sentiment by customers by introducing a product, or risk falling behind competitors in both sentiment and younger customers that could be upsold to other products, such as mortgages.

Maximising the value of Fintech acquisition