On the 13th of January, the ICIS, a market intelligence company, announced that UK wholesale gas and electricity prices hit a five-year low at the end of 2015, with gas prices falling 34% over the year. This triggered pressure from government, regulators and consumer groups for utility companies to cut prices. Ann Robinson, Director of Consumer Policy at uSwitch, said consumers have a right to “a reduction of 10%” and, on the 15th of January, Dermot Nolan, Chief Executive at Ofgem, accused the Big Six of overcharging customers. Energy Secretary, Amber Rudd, and Which? Chief Executive, Richard Lloyd also called for price cuts. Over the course of the next month, utility companies, including the Big Six and smaller challengers, proceeded to cut gas prices one by one.

In light of the series of price cuts across the industry, alva sought to investigate how sentiment responded to the reactive price reductions. Price cuts present a key opportunity for communications and corporate affairs teams to boost sentiment and, in this piece, alva uses over 15,000 pieces of content relating to gas prices to highlight what can be learned about timing and messaging in order to maximise positive gains. The scope of the analysis is detailed below. 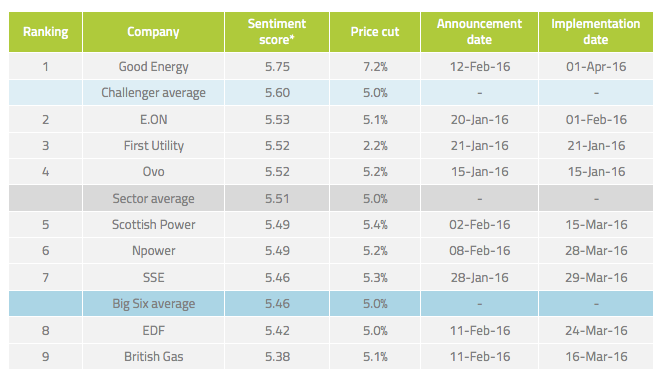 This table illustrates the key variables that influenced sentiment towards the price cuts: timing, size and prior reputation. These key learning areas are outlined in more detail below.

Companies that cut their gas prices early on tended to generate more positivity, receiving the “first-mover advantage”. This is especially true when looking at just the Big Six, whose sentiment scores largely fall in line with when their price cuts were announced. This is illustrated in the table below, with companies listed in order of the date on which they announced their price cut. 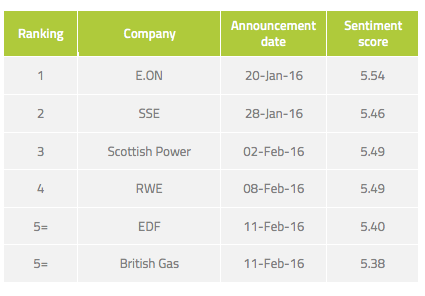 E.ON comes out on top of the Big Six, receiving additional positivity through referencing in reporting when other companies announce their price cuts in the following few weeks. Conversely, companies that announced their price cuts later are criticised for not doing so in earlier coverage. EDF and British Gas are the last of the Big Six to cut prices and mainstream media makes reference to this.

The only company to not fit this trend is SSE – second to announce its price cut but 7th in the ranking (Table 2), as the company received criticism for the implementation date of the price cut being at the end of March, allowing the company’s profits to be boosted by an estimated £24m.

The table below displays the top five price reductions. 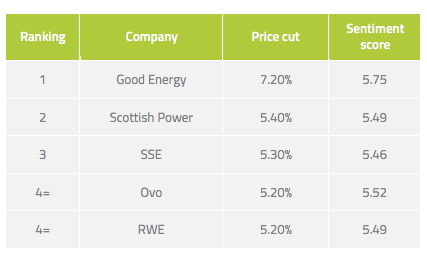 Good Energy outperformed the rest of the sector by a considerable margin, ranking 1st in the sector with a price cut of 7.2%, 2.2% above the average reduction (Table 2). Good Energy was also the last company to announce its price cut, allowing coverage to praise the company for “outdoing” its larger rivals. Size does not appear to have an impact on scores for the other companies, indicating that size only matters when it is substantially different from the competitors.

The reputation of each of these companies was an important driver of sentiment towards price cuts. First Utility received praise for its modest price cut of only 2.2% being its “11th energy price cut in a year”. The challenger suppliers also escaped initial criticism, with coverage highlighting their tariffs being cheaper even with Big Six price cuts. Meanwhile, prior reputation around customer complaints, regulatory fines and loss of customers is referenced in price cut content for Scottish Power, npower and SSE, respectively. Clearly, the re-emergence of historical negative sentiment inhibits the reputational gains that could have been captured from a price cut. Companies that avoided such negativity saw higher scores.

The timing of other announcements had an effect on the pricing sentiment of some of the companies. E.ON launched the “cheapest energy tariff in the UK” on the same day it announced its price reduction, amplifying positivity. British Gas released its financial results, showing a 31% rise in profit, a week after announcing its price cut. Coverage of the results accused British Gas of “ripping off customers”, linking the increase in profit to the smaller 5.1% price cut.

The most recent wave of price cuts in the utility sector demonstrates key learnings for how companies can make the most of a positive announcement.

* The alva algorithm calculates sentiment scores out of 10, where a score of 5.50 is considered neutral. The algorithm takes into account the volume, influence, prominence and relevance of real-time mentions from 80,000+ news sources, more than 3m blogs and forums, 100+ social networks. A score above6.00 is considered strong, while a score below 5.00 is considered weak. 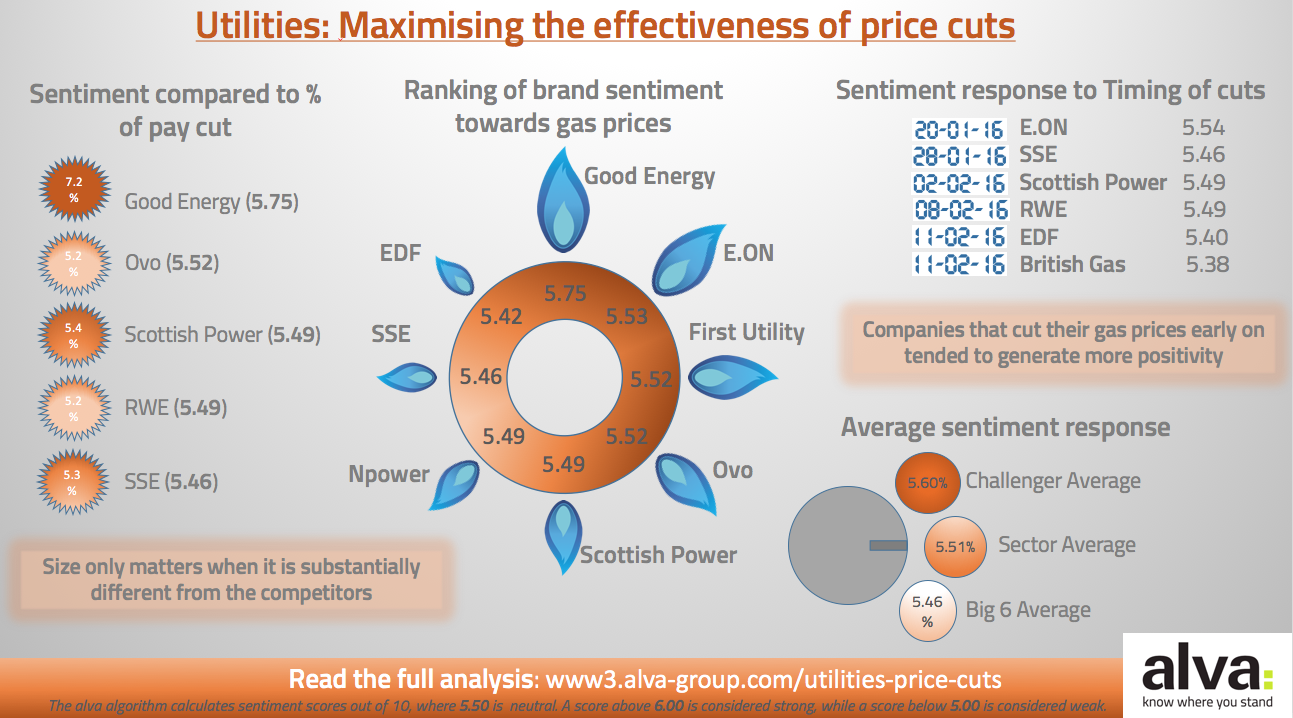