Jamie Oliver calls for a sugar tax – how should companies respond?

In recent weeks, Jamie Oliver’s “war on sugar” has heated up, with the British chef calling for a tax on sugary food and drinks.

While Oliver’s previous campaign around food waste has seen high profile companies such as Tesco and Co-op become more visibly proactive on the issue in line with strong consumer support, there has been little evidence of consumers strongly supporting his sugar crusade, leading to uncertainty for soft drinks manufacturers as to whether or not to align themselves with Oliver’s stance.

alva has been tracking the issue of sugar and its key spokespeople for the past three years, and we recently combed through our data to understand the consumer response to Oliver’s sugar crusade. The key findings of the analysis are:

Jamie Oliver contributed only minimally to the discussion on sugar in March, April and May.

In June, Oliver generated over a quarter of all sugar content on social media after he introduced a 10p surcharge on all sugary drinks at his restaurants.

In July, Oliver’s influence lagged due to a lack of proactive media promotion, while overall sugar content increased as Tesco delisted drinks including Ribena and Capri-Sun because of their high sugar content.

Oliver’s influence grew again in August, when his calls for a “sugar tax” gained traction in national media. 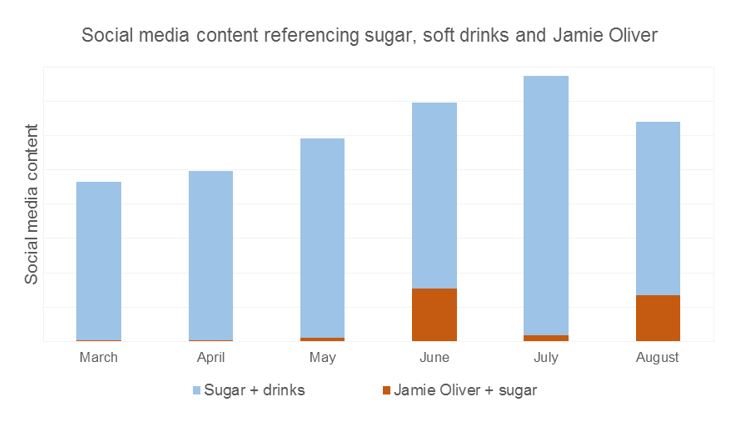 What’s the consumer response to this?

A theme throughout these six months of coverage was consumer criticism of Jamie Oliver as “hypocritical”, as his restaurants continued to sell sugary drinks and desserts. And while the use of this negative language has lessened over the period, the number of consumers who think that Oliver (and his restaurant menu) are hypocritical still outnumbered those who supported him last month.

Crucially, unlike other initiatives such as his food waste campaign, there is no clear evidence of strong consumer support for a tax on sugary drinks.

How influential is Jamie Oliver likely to be on this issue?

alva looked at Oliver’s food waste campaign, which generated coverage primarily in January and February in line with TV programme “Jamie and Jimmy’s Friday Night Feast”. The campaign called for supermarkets to stock less than perfect produce and for consumers to embrace this “wonky veg”. 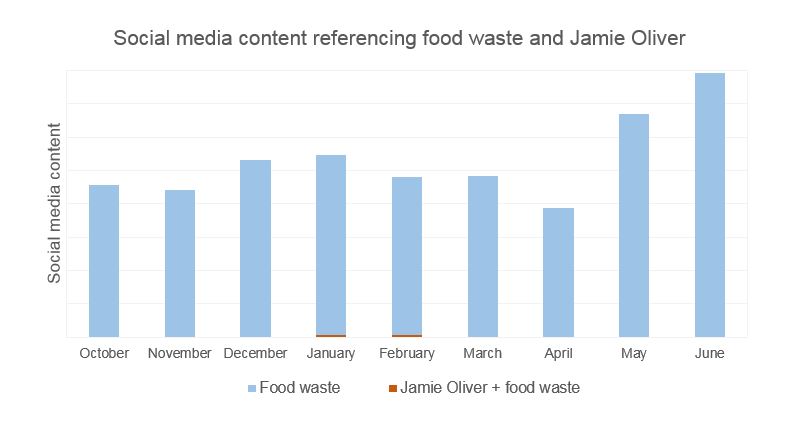 While consumer discussion of food waste more generally on social media remained consistent – and indeed grew in May and June thanks to food waste initiatives in France and at Tesco – content referencing Jamie Oliver dropped off after February.

It seems that the direct “Jamie Effect” was relatively short-lived. As soon as his show went off air, consumer discussion of Jamie Oliver’s contribution to food waste discussions practically disappeared.

However, the issue itself has continued to grow in focus, galvanised by influencers such as Jamie Oliver, with supermarkets such as Co-op now moving to significantly reduce food waste.

So what can we take away from this?

Judging by the parallel of the food waste campaign, Jamie Oliver’s direct influence is likely to wane once his programmes end. However, he has managed to bring the issue of sugar front of mind to many consumers and corporates.

There is one crucial difference between the food waste campaign and the “war on sugar” – while the issue of food waste enjoyed strong consumer support, consumer reactions to sugar have been more mixed.

So, while Jamie Oliver’s calls to action have boosted coverage for now, is there the same consumer-led momentum behind the sugar movement as there was around food waste? alva’s data would suggest probably not.

What drives customer Advocacy in the airlines sector?

Liz Kendall: Where she lost the Labour Leadership battle