NFL and Community Engagement: Is this really changing perceptions?

Community engagement has been a subject of increased focus for NFL teams in recent months. From speculation over which team should re-locate to Los Angeles highlighting the need for the successful applicant to demonstrate “a solid track record of community engagement”, to the league’s ongoing attempts to deal with its domestic violence issues, community relations have become a primary concern for all parties involved in the sport.

We monitored 88,268 pieces of US content related to the 32 NFL teams across print, online and social media. The time period analysed was January – December 2015.

The key questions addressed in this analysis: 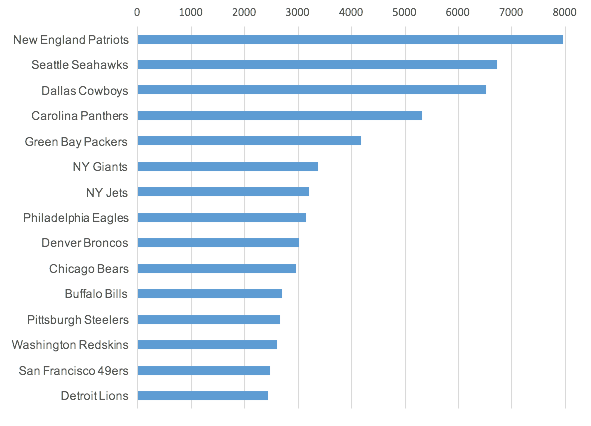 The New England Patriots, Seattle Seahawks and Dallas Cowboys benefitted from the largest share of voice among football teams. The New England Patriots generated the largest volume of community and charity content, mostly from mainstream media coverage of its partnership with the US Attorney General aiming to prevent “youth relationship violence”.  Similarly, the Seattle Seahawks and Dallas Cowboys were praised by national and social media around their charitable fundraising and donation programmes.

The data shows that NFL teams managed to benefit from overall positive coverage around their community engagement initiatives, with fund raising campaigns and donations being the most visible initiatives in 2015.

Which sources are driving the most coverage?

Over the last year, coverage around community engagement for these three teams was driven by social media (50%), which users used as a platform to thank and support teams’ charitable initiatives.

The charts below show the proportion of content each media type generated on the subject of community engagement for the New England Patriots, Seattle Seahawks and Dallas Cowboys.

From the data analysed, Social Media was clearly the most effective channel for communicating community engagement initiatives. Not only did it generate the highest volumes, but it produced the largest proportion of positive content. More qualitatively, given that the target audience for this content was the community, social media provided an authentic vehicle for the community itself to discuss and praise the various initiatives undertaken.

Is there a correlation between community engagement coverage and a team’s sentiment*? 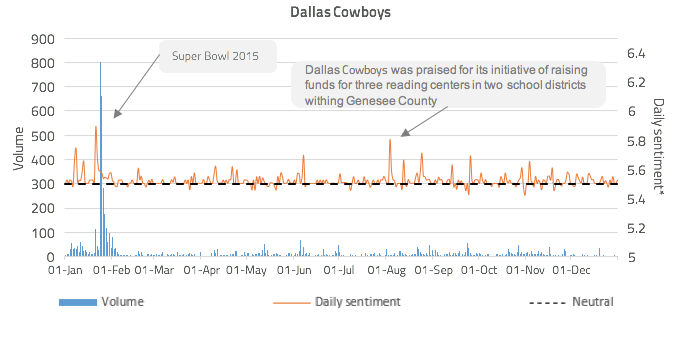 Most of the positivity around this issue was driven by clubs raising funds for charity. Social media amplified coverage around these events, where fans showed their support by sharing the events and urging others to participate.

alva also saw an increased interest around individual team players and team owners, who were praised for their individual volunteer work and charitable donations, as well as for the charitable events organised by the teams – for example, the New England Patriots’ “Premiere Gala”.

Negativity was seen in small volumes and was largely confined to criticisms of the relatively “small” donations made by certain teams in comparison to their overall wealth.

Overall, there was a clear correlation between proactive community engagement and NFL teams’ sentiment scores; those that were most active in this space saw commensurate returns in the form of improved perceptions. The greatest single contribution to improved sentiment came in the form of the “Super Bowl charity bet”.

With this correlation established, other key findings include:

What do asset managers think about the risks or opportunities of Brexit?