Over the past months, we have seen an increase in the influence of oil and gas restructuring and cost cutting measures in terms of shaping the reputational performance of the sector’s key players.

This apparent sector-wide reshuffling was triggered by the recent lows in oil and gas prices that resulted in job losses, revenue shortfalls in many energy exporting nations and a wave of bankruptcies among US shale gas producers. In light of this, alva used its comprehensive monitoring and content analysis platform to investigate how this trend has developed and which companies were leading the way in this domain and why.

After scanning the oil and gas sector for discussion of restructuring, it was clear that the three organisations generating the highest visibility on this issue were Shell, BP and Chevron.

Figure I: Scope of Analysis 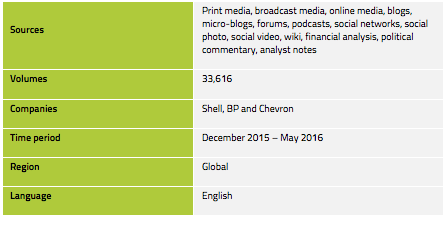 How did the top 3 companies for oil and gas restructuring perform?

Sentiment for the wider oil and gas sector tends to remain below the neutral point due to several prevalent reputational issues such as climate change criticism and negativity from activists, which consistently hold back scores. Figure II shows that over the past six months the analysed companies performed positively (above 5.5) in terms of restructuring in contrast to their overall scores which remain below the neutral point.

This indicates the opportunity to bolster reputation with key stakeholder groups such as employees and investors when restructuring measures are communicated in the right way.

How can the Oil & Gas sector manage messages around restructuring and cost cutting? 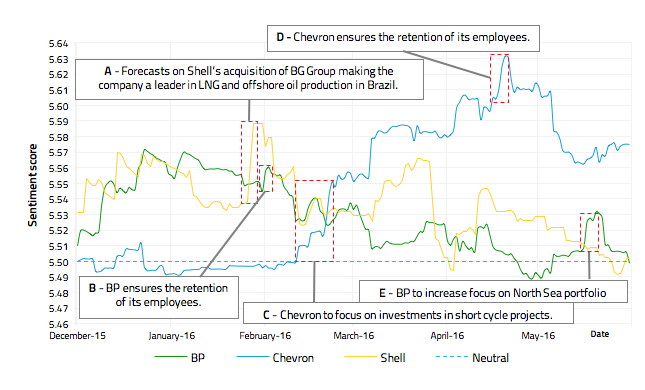 Redundancy announcements are usually accompanied by negative sentiment but reputational gains are still possible if framed with personal messages about jobs retained. As shown in figure II Chevron topped the sector for its restructuring initiatives in the last six months. The company proved very effective in underlining its efforts to maximise employee retention when engaging in the sale of its non-core assets (D) such as the Cox Oil acquisition of a number of assets in the Gulf of Mexico where more than 100 Chevron employees retained their positions. Similarly, BP also managed to garner positivity as the sale of 15 refined products terminals to Kinder Morgan saw the retention of 120 former BP Products North America employees (B).

Despite being subjected to job cut related negativity, the primary driver of coverage in terms of restructuring for Shell was the acquisition of BG Group where the company managed to gain the approval from the majority of shareholders of both companies for the transaction (A). Positive sentiment towards the company increased through forecasts on Shell benefitting from becoming a more specialised group with a bigger focus on liquefied natural gas. This proved particularly successful in reassuring investors of the company’s ability to increase its energy reserves by about a fifth and to enhance its free cash flow profile.

Similarly, messages around BP’s increased focus on its North Sea operations (E) through an extensive renewal programme and new production technology allowing it to secure better profit margins worked to showcase the company’s drive to ensure the reliability and efficiency of its assets.

In the past key sector players have usually opted to pursue the development of major offshore projects to expand production capacity. However, as indicated in point C Chevron registered a significant rise in sentiment due to trade media coverage around its plans to focus on a steady pipeline of investments in “short-cycle” projects that can take months, rather than several years, to come online. This helped reassure investors of Chevron’s capacity to ensure lower execution risks in its future projects and the quicker reaping of benefits.

In summary, the key takeaways from the media analysis are:

If you would like further information on how media analysis and reputation intelligence can identify risks and opportunities for your company, please contact christopher.cleves@alva-group.com or fernando.blanco@alva-group.com.