Which other products are most at risk from the sugar tax?

The announcement of a sugar tax by George Osborne in mid-March sent ripples through the UK’s FMCG landscape. The soft drinks industry was targeted with the tax, with government officials, health campaigners and the media weighing in on their belief of its effectiveness.

While soft drinks are the first products on which the tariff will be applied, a question remains regarding whether or not other industries’ products should or will be affected by a similar tax.

Government advisers, health campaigners and opinion leaders have made their opinions clear, but which of these messages is resonating most with consumers? Which products may be the most at risk for the next “sugar tax”, if the government bows to public pressure?

alva analysed consumer content from social media related to the sugar tax from 16 March – 3 May 2016 to identify:

Which products besides soft drinks were most discussed by consumers in relation to the sugar tax? 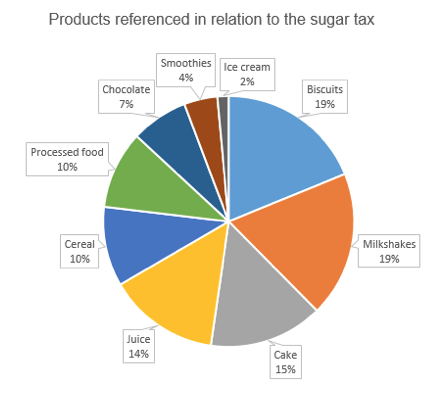 What were the key content drivers for these products?

Though all of these products were discussed in relation to the sugar tax, not all discussion was critical.

For example, items like biscuits, cake, chocolate and ice cream were subject to tongue in cheek commentary, such as blaming Jamie Oliver for hypocrisy in his support of the tax while still offering these products at his restaurants, discussion of “Eric Pickles’ biscuit bill” as having escaped government scrutiny and gratefulness from anxious consumers that chocolate has escaped the tax.

On the other hand, milkshakes, juice, cereal, processed food and smoothies generated much more serious criticism of the tax – and its ineffectiveness in addressing key sources of sugar in UK diets aside from soft drinks. Consumers amplified arguments that “sugar-loaded” milkshakes and fruit juices should be subject to the sugar tax, as they “breach the limits” set by the government in many cases.

Government advisers and journalists such as Alex Renton initially championed the campaign for the inclusion of cereal and processed foods within the tax’s remit, and consumers amplified these arguments on Twitter. Consumers blamed hidden sugars and the “overconsumption of overprocessed food” for Britain’s obesity crisis and the sugar tax.

Which companies are most at risk?

Generally speaking, confectionary including biscuits, cake, chocolate and ice cream did not generate much consumer criticism, while products marketed to be healthier found themselves the subject of negativity. Therefore, FMCG companies that produce milkshakes, fruit juice, cereal, processed foods and smoothies are likely most at risk of continued criticism and potential future inclusion in a sugar-based tariff.

This finding complements previous research from alva, presented at the FDF Health Briefing in February 2016.

Before the announcement of the sugar tax, we found that cereal had been the product group most negatively impacted by sugar coverage in 2015, out of three sub-sectors: cereal, confectionary and soft drinks. 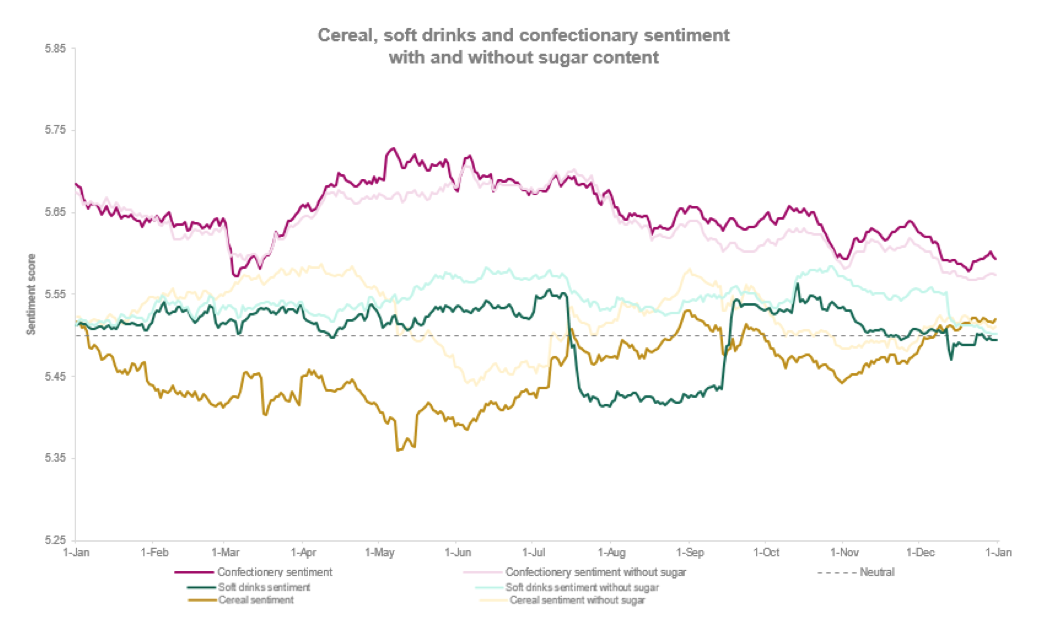 While consumers expected confectionary products to contain a large amount of sugar, it was the “hidden sugar” in cereal that made it vulnerable to media and consumer concern. Indeed, confectionary was often favourably compared to other, perceived to be healthier, products in terms of sugar content.

The soft drinks industry, on the other hand, while still the focus of negativity, had effectively countered the majority of this negative coverage with the release of low-sugar or sugar-free product variants throughout the year.

These themes continue to drive sentiment post-sugar tax, as it is the products consumers expect to be healthy but which actually contain a significant amount of sugar that are making people wonder, “Why does the sugar tax not apply?”

How to mitigate sugar tax risks

Download our free presentation from the Food and Drink Federation’s (FDF)Health Briefing event, for more information on how sugar is affecting the industry’s reputation.

Maximising the value of Fintech acquisition