It will not be news to UK commuters that the timetable change in May – touted as a way of boosting passenger capacity over peak periods as part of the Rail 2020 vision – did not go off seamlessly.

So-called “Meltdown Monday” saw widespread cancellations and delays as rail operators seemingly were unable to cope with the new services.

As days of disruption turned into weeks, passengers were left looking for someone to blame. Some believed the fault lied with rail operators themselves, some with the government and others – somewhere in between.

But who suffered the most public ire? 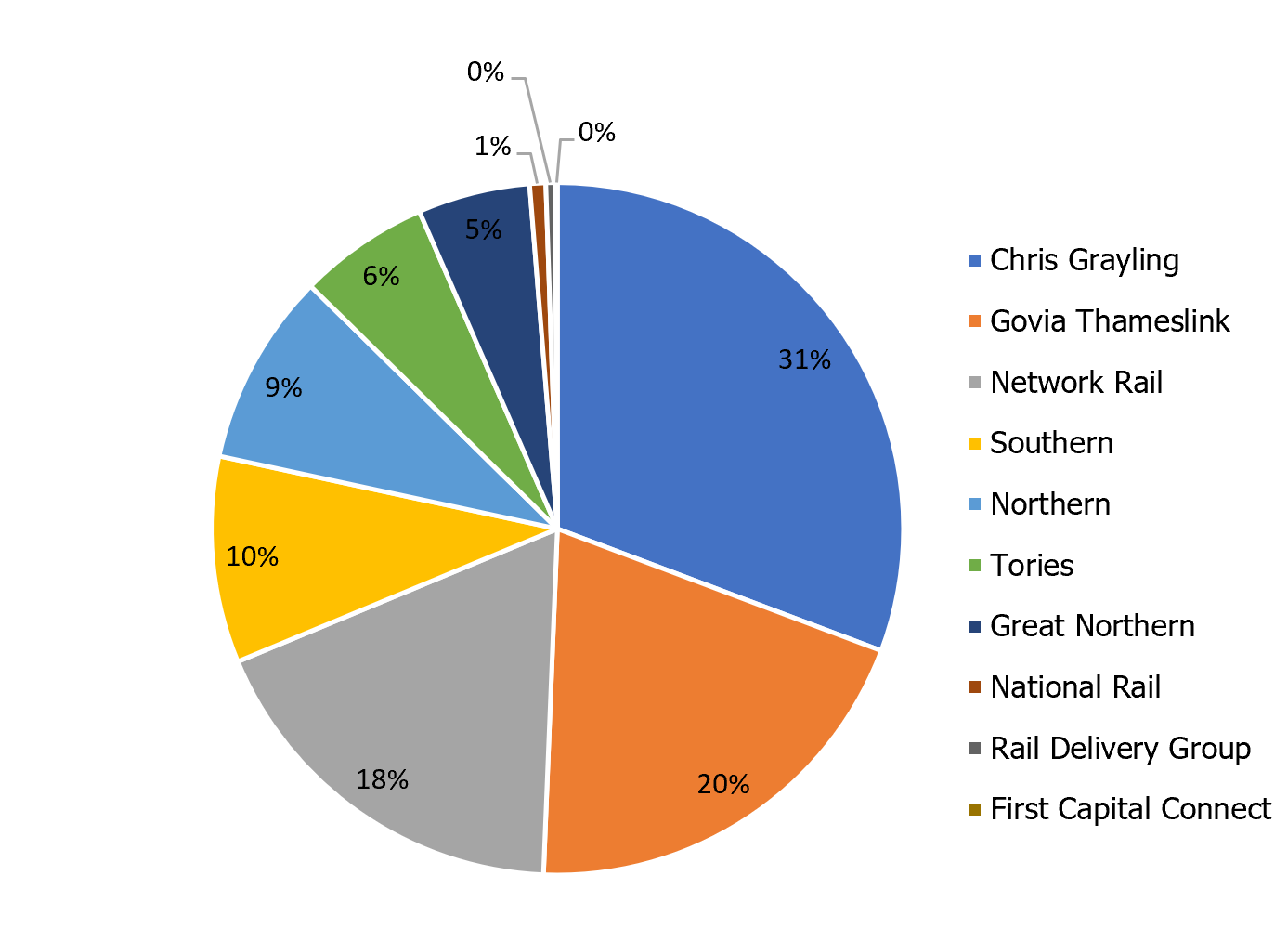 As might be expected, the Tory Government and Chris Grayling are bearing the brunt of negativity, in particular in relation to train delays in the North. The timetable chaos seemed to reinforce perceptions among northern commuters that the region had been left out in the cold by Westminster. Between them, the conservative party and Chris Grayling were blamed in almost 40% of Twitter discussion, with Chris Grayling responsible for 31%. The public blamed him for allegedly knowing in advance that the timetable changes would not go smoothly. Others acknowledged that several parties were to blame but that, as Transport Secretary, the buck ultimately stops with Grayling.

Govia Thameslink (GTR) is the next most blamed organisation, with 20% of the public on Twitter writing that it is at fault over the timetable delays. Some travellers took the opportunity to call for GTR to be “stripped” of its franchise (backed by a letter to Chris Grayling from Sadiq Khan), while others believed that the company knew about the upcoming disruption but did not adequately prepare. Following about a month of travel disruption, Govia Thameslink CEO Charles Horton stepped down. Public blame of GTR lessened after the announcement, but it is hard to know how much of this can be credited to Horton’s stepping down – in general, rail timetable discussion declined by over two-thirds after 15th June, four weeks after the introduction of the new schedules.

Network Rail garnered 18% of the blame for the timetable chaos. Discussion around this organisation also took on a political bent – almost half of the individuals who directly blamed Network Rail for the situation also took the opportunity to campaign either for or against rail nationalisation. Unsurprisingly, those who lumped Network Rail with rail operators in being at fault also called for railways to be “brought back into public ownership”. Another contingent on Twitter echoed the sentiments of the Institute of Economic Affairs’ Richard Wellings, who emphasised that Network Rail is a publicly-owned body, so if they shared the blame, nationalisation was not necessarily a catch-all solution.

Southern, Northern and Great Northern garnered a similar amount of blame from passengers – between 5-10%.

Is there Public support for rail nationalization?

Have the recent issues impacted public calls for rail nationalisation? As noted above, the broad group of responsible bodies has catalysed beliefs on both sides of the aisle.

At the same time as the large-scale timetable delays, Virgin Trains East Coast was winding down its operation, having now transitioned to state-run LNER at the end of June.

Volume of discussion around the timetable vs rail nationalisation 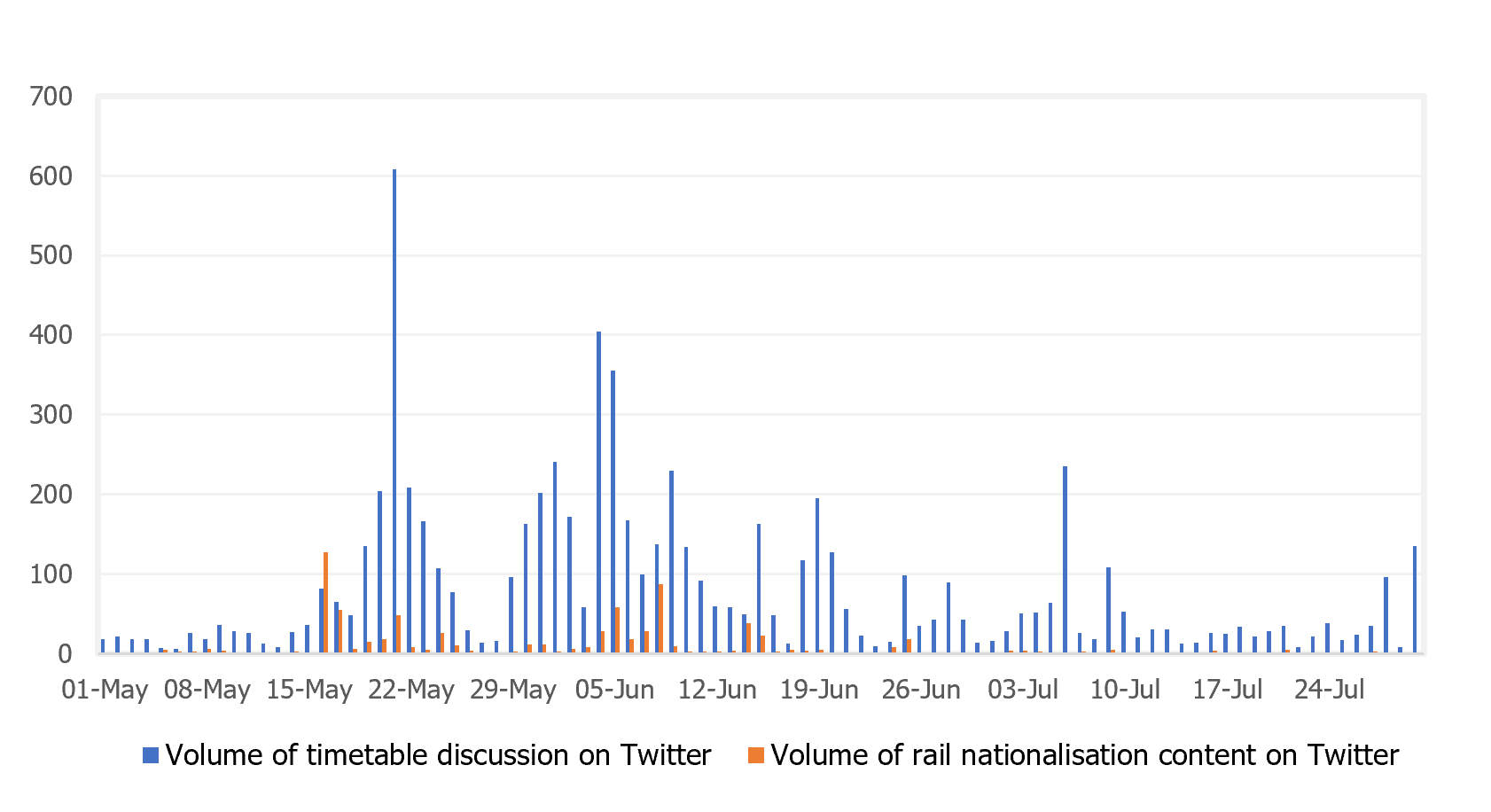 While we did see peaks in discussion around rail nationalisation both in mid-May and early June, discussion on Twitter has greatly diminished since then.

Discussion remained equally split – for the moment. While recent events have certainly catalysed debate, they also seem to have galvanised pre-existing views among the public.

Risk to Reputation within the Rail Sector

Because there is not one organisation who should clearly take the blame for the May timetable chaos, there is of course evidence of an industry-wide contagion effect.

While operators outside of Thameslink, Southern, Northern and Great Northern did not garner significant, direct blame from the public, several others were subject to sustained criticism around delays and disruption. These operators included TransPennine Express, East Midlands, GWR, Virgin, South Western and Scotrail. Commuters often linked these delays and cancellations to the broader timetable change, whether in reality they were linked or not.

Public support of rail nationalisation seems to have remained where it was pre-May. While the disruption and recent takeover of VTEC by LNER have driven higher than average levels of discussion around the topic, the public vocal on Twitter seems as polarised on this issue as ever.

In sum, passengers are losing faith that their rail travel can be delivered well. They’re not sure who to blame, but the lion’s share believes the buck stops with Chris Grayling and the Government. This attitude signals that transport will likely be a driver of public debate ahead of the next election.

Companies need to both understand public concerns and communicate openly around plans to avoid disruption on a mass scale again. Otherwise, the industry is in real danger of losing public faith completely.