Research & Development (R&D) innovation matters for pharmaceutical companies. Multiple firms have recently repositioned their brands to be more science-focused, with a goal of bolstering reputations among not only the science community but across a range of stakeholders.

In an M&A-heavy climate, even large pharma companies are increasingly in the spotlight as potential takeover targets, and those that are able to prove that they have a strong pipeline and independent prospects are less likely to fall victim to a hostile takeover attempt. Furthermore as pharmaceutical pipelines are becoming more streamlined, R&D innovation is driving investor confidence in these new strategies.

With increasing scrutiny around drug pricing, in particular following a very notable US scandal a few months ago, pharmaceutical companies are being pushed by healthcare professionals and payers to prove that their focus is still on innovative R&D – and that current prices are justified given significant investment in this area.

alva analysed UK publicly-available content on 5 large pharmaceutical companies for the past 12 months to uncover which companies had been most successful in building a reputation for R&D innovation. This blog post is an extract of the full reputation analysis. 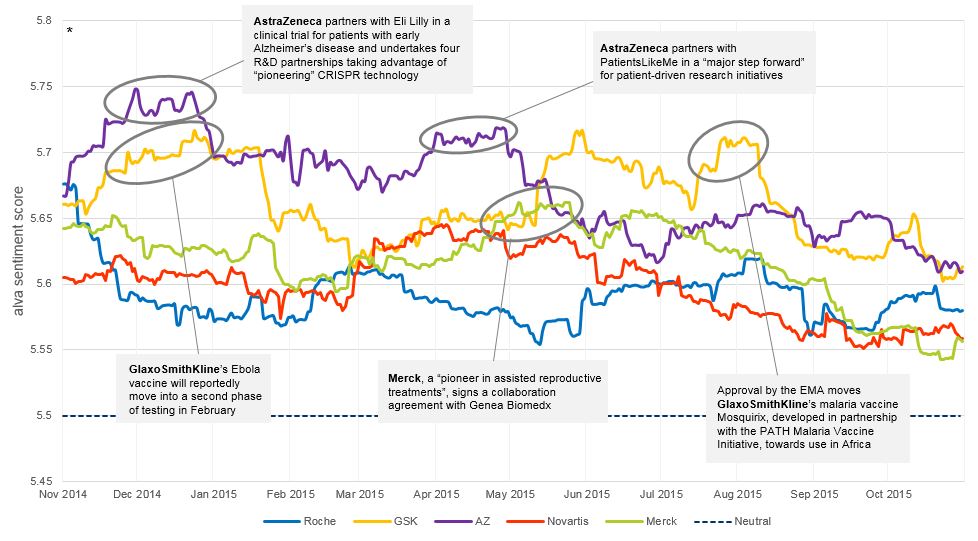 Which pharma companies have the best reputations for R&D innovation?

After fending off a takeover approach from Pfizer in early 2014, AZ has built its corporate reputation in recent months by focusing on its standalone pipeline strength. The company’s reputation around R&D innovation peaked around partnerships with Eli Lilly and PatientsLikeMe and following its “pioneering” CRISPR collaborations.

Despite lingering negativity around its Chinese bribery “scandal”, GSK boosted positivity around R&D innovation with its initiatives around global public health. GSK’s development of an Ebola vaccine in late 2014 and early 2015 drove positivity in mainstream media, while the company’s malaria vaccine moved one step closer to use in Africa following EMA approval in autumn 2015.

Merck rebranded as a “science and technology” company in October 2015, unveiling a new logo in line with the company’s “vibrant technology” focus. The company was the third highest performer around R&D innovation of the pharmaceutical firms alva analysed in the UK, with company sentiment peaking mid-2015 following coverage of a collaboration agreement with Genea Biomedx that framed Merck as a “pioneer in assisted reproductive treatments”.

Are pharmas making the most of R&D reputation opportunities?

Companies that had the best reputations for R&D innovation emphasised “pioneering” or first-in-class innovation and highlighted initiatives aimed at improving health in the developing world. And while AZ, GSK and Merck most successfully enhanced their reputations for R&D innovation in this group, what is striking is that all five companies trended downwards over the period. This suggests short bursts of activity, typically spurred by product announcements rather than a consistent agenda to position tbe organisation as a leader in R&D innovation. There is, therefore an opportunity for one or more pharmaceutical firms to translate these short-term peaks in positivity into a sustained reputational trend.

alva provides global reputation intelligence for these and other pharmaceutical and biotech companies.

To discuss this analysis further or to understand our fuller range of services, please contact us to set up a call or demo.

How does fintech provide a reputation opportunity to insurers?

Cybersecurity and the risks to reputation