The financial importance of reputation and brand was highlighted this week with Nikkei Inc’s £844m purchase of the Financial Times.

The decline in print publishing has been well documented, with many companies struggling to find consistent revenue streams in a digital age. Print circulation numbers have plummeted and therefor the amount of print advertising revenue for publishers has followed. 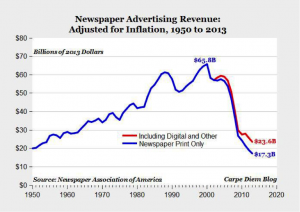 The digital age has fostered an expectation of instant news, available for free. This has mean that in order to maintain profits and quality, publishers have had to find new revenue streams or merge. The FT is widely acknowledged as being at the forefront of these technological innovations and also for the quality and reliability of its editorial output – a precious commodity in the online age.

It is this reputation and prestige that has occasionally influenced strategy, rather than hard financial evidence. Dame Marjorie Scardino, Pearson’s previous Chief Executive, was a big advocate of the FT, stating it would be sold “over my dead body”. As an old FT employee, she saw the emotional appeal of the brand and the value it brought the wider organisation in terms of prestige.

When Dame Scardino left, rumours about the future of the FT started almost immediately. The cold hard facts of the balance sheet showed that despite the quality of the brand, the profits were relatively low. Pearson’s core focus became clear in late 2013 when they sold Mergermarket with the explanation that it did not fit in with the company’s educational focus.

This new focus led to friction between the parent company and its flagship brand, as investment was steered away from the FT and the digital innovations that could aid its revenue, and instead into the educational products which have been struggling in recent years. This was a situation that could not continue, as Pearson saw low profits, while the FT’s ability to prove its full potential was limited by a lack of investment.

Sale beneficial for the reputation of all parties

The sale of the FT has been beneficial to all parties. Pearson received a large fee, with many analysts surprised it went so high. The purchase was around 35 times the value of the FTs operating profits, while rivals such as the New York Times Company trade on around 10-12 times. This displays the true potential value of reputation.

The day before the sale, Arjun Seth, CEO of Protein world, was bullish on the worth of corporate reputation following the infamous Beach Body Ready campaign. The reasoning was that it was sales that mattered, not the mass media reaction. While the FT’s brand is on a different scale, if they had adopted a similar attitude and dumbed down their output then there is no doubt that the sale value would have been vastly reduced.

The current mood within the FT is also buoyant, despite the uncertainty that comes with any sale. If they had remained under Pearson, a continued lack of investment could have led to an unintended reduction in quality and thus reputation. This tension was highlighted the day after the sale, as the FT itself stated that the “decision to sell the group developed after senior management at the FT expressed its exasperation with the publishers’ running of and commitment to the news organisation”. Staff within the FT are optimistic that the goals of their parent company will once again align with their own, and new investment will give them the best platform to show that their revenue and profits can match the heights of their reputation.

Nikkei have paid a premium due to the brand reputation, but this purchase gives it immediate access and goodwill in territories where it has been struggling to establish itself. Rather than the long process of building their own reputation in an already competitive landscape, they have bought one of the best and banked on reputation.

Be part of the Connected Intelligence community Join our Newsletter

Leading companies are providing special bonuses to employees on the front line, while execs forgo pay to stabilise their companies & to support the community. Read the top examples of firms demonstrating #businessleadership in #Covid_19 here 👉 https://t.co/zL4cN1BHF4

Reply on TwitterRetweet on Twitter2Like on TwitterTwitter
Load More...
Also follow us on

Be part of the Connected Intelligence community

To join our Connected Intelligence community simply complete the form below.