“One Number to rule them all, One Number to find them, One Number to bring them all and in the darkness bind them.” Tolkien didn’t quite say that – he was more focused on the ups and downs in Mordor, frankly – but he might have, had he been talking about one of the central challenges in reputation measurement today.

I speak to a good number of CCOs and their measurement teams who are currently measuring their reputation using a single score, yet who are challenged in turning this into actionable intelligence to drive more impactful communications strategies and tactics. Let’s go under the surface to find out what’s going on here.

In Search of a Single Number

Since the turn of the century, marketing researchers have been divided by their opinions on the Net Promoter Score (NPS). This metric was developed by Fred Reichheld, Bain & Company and Satmetrix, and announced in 2003 by Mr. Reichheld in the Harvard Business Review article “One Number You Need to Grow”.

Essentially what the metric does is to produce a single score from a set of survey responses, where respondents are asked how likely they would be, on a scale of 0 to 10, to recommend the company, product or service they’re being asked about. The percentage of ‘Detractors’ (those at the bottom and middle of the scale) is subtracted from the percentage of ‘Promoters’ and the resulting figure is the NPS.

Much of the support for the metric centers on its simplicity and its fundamental ability to motivate an organization to address its deficiencies. On the other hand, there are many NPS detractors – pun intended – including those from academic and quasi-academic backgrounds that argue that NPS is flawed for many reasons, but predominantly because (1) it’s not in fact predictive, and (2) it focuses on the what, not the why.

The parallel exists in reputation measurement; there are those that will defend a single, overarching ‘reputation score’ for its ability to focus an organization on acknowledging the existence and importance of its reputation; a forcing function, if you will.

While this is unarguable, it is also fair to say a single metric is not sufficient. In my experience, a belief in a single number is more pervasive inside organizations that are relatively early in their reputation measurement ‘journey.’ A single score can track performance relative to competitors but it will not help overly in overcoming them.

Again, similar to NPS, proponents of a single reputation score focus on the simplicity of a single number as if that were an end in and of itself; simplicity is a virtue, granted, but not if it obscures what’s really valuable. A risk team might receive a single score from their communications team, and while this checks a box in terms of compliance, it doesn’t actually do anything in terms of helping an organization to minimize residual risk.

Another challenge for a single score, in terms of risk specifically, is that unless there is a catastrophic risk event, it is perfectly feasible that negativity from one or more stakeholder groups could be ‘washed out’ by the impact of successful communications tactics – effectively hiding the risk you need to be aware of.

The Drivers of Reputation

What is needed is a measurement system that identifies and quantifies the drivers of change. In this example below, it’s clear which initiatives the company is failing on – watch out, sustainability – and which it’s succeeding with – take a bow, emerging markets.

Indeed, it also identifies the leading organizations in the competitive set in terms of particular communications areas, which would lead to further research to understand exactly what those organizations were doing to succeed. 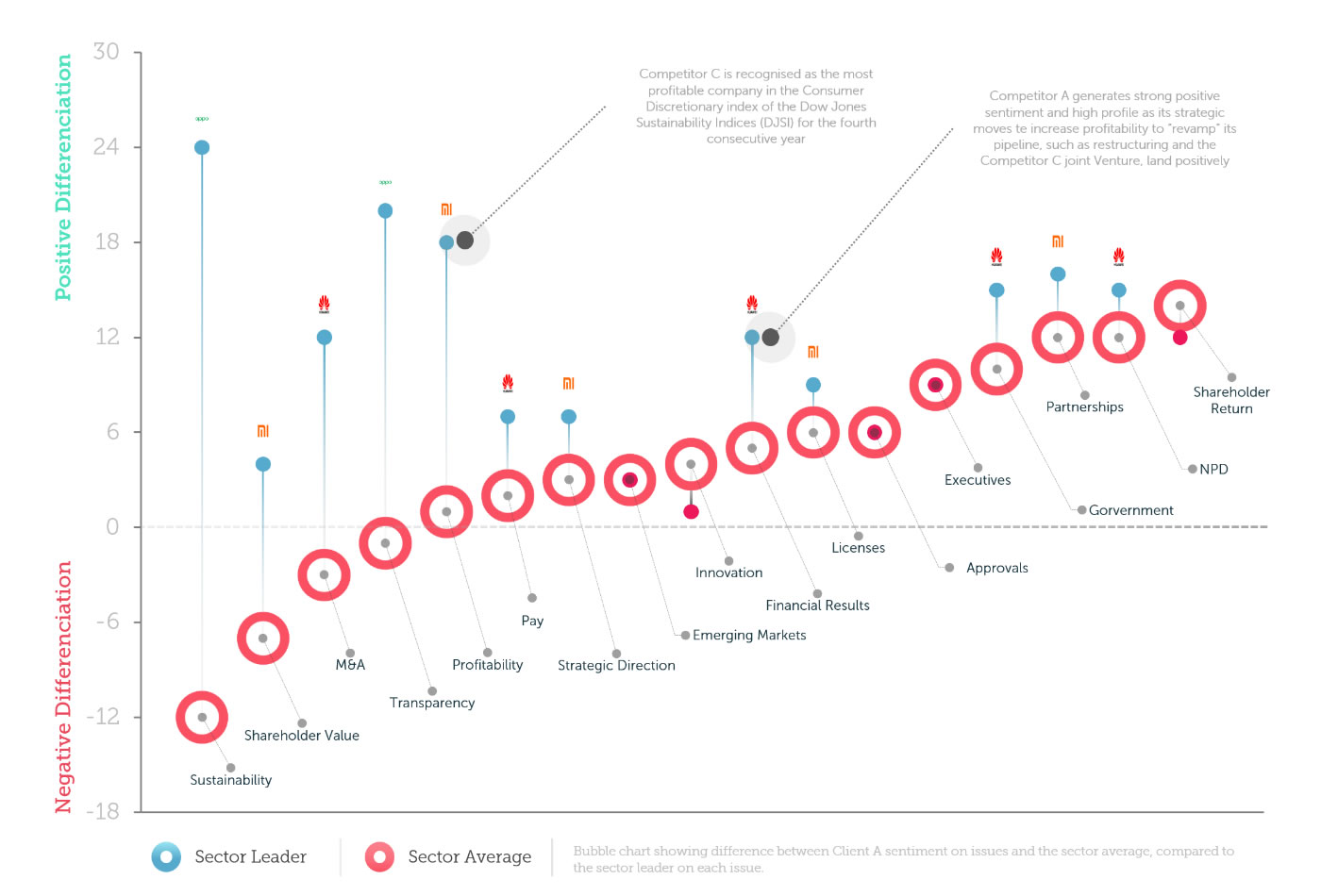 This goes beyond key message penetration, and identifies the organic – i.e., not predefined – drivers of reputation to paint an issue-specific picture of the competitive landscape.

We’ve been in a similar position in communications measurement before.

Advertising Value Equivalence (AVE) was developed in the immediate post-war period and was once a common standard for measuring the impact of communications tactics. Essentially, the practice involved measuring the column inches devoted to coverage and valuing the latter based on the cost of placing similar-sized advertising in that same media vehicle.

However, the metric has been thoroughly discredited, not least by AMEC’s Barcelona Principles, published in 2010 and updated in 2015, which state that “Advertising Value Equivalents (AVEs) measure the cost of media space or time and do not measure the value of PR or communication, media content, earned media, etc”; essentially, drawing a line between how advertising is perceived by a reader and how earned media are perceived.

The industry has matured now to focus on the impact of communications, and AVE is being replaced by more actionable and precise metrics.

The same is now required in the context of reputation: while a single score-based framework may be in use by organizations that are starting to develop reputation measurement, it is not sufficient for those looking to drive competitive advantage through communications. These organizations need to focus on which specific issues are the drivers of their reputation with particular stakeholder groups, and equip their communications teams with the data and insights to enable them to act – and succeed.

Property fund exodus – have we been here before?