The Connecting Leader Series (3 of 10). This article is adapted from the book The Connecting Leader: In the Age of Hyper-transparency, Interconnectivity and Media anarchy, How Corporate Leaders Connect Business with Society. In this piece, Alberto explores the concept of reputation as a Social Contract barometer and why companies should focus their efforts on sound business practice rather than “reputation management”.

In the aftermath of the financial crisis and in response to the intense scrutiny coming from society, business initiated a process to repair the damage caused by the excesses of the previous years. Not all companies took the same approach to restoring trust; a few adopted a long-term perspective, some went into hiding and many continued being dominated by short-term financial goals.

The last two categories, companies that were mainly driven by short-term goals and those that tried to be invisible, didn’t fully grasp what it took to succeed in the New Normal (see last week’s blog).

The invisible type, motivated to avert public scrutiny by avoiding the limelight, failed to obtain stakeholder support when they needed it.

The short-term type focused on restoring trust and building their reputation in the old-fashioned way, treating reputation as a construct. While previously, it was perfectly normal for companies to use spin and manipulative “reputation management” strategies to attract and engage stakeholders, in the New Normal, these techniques have become of very little use to navigate and recover from a crisis or restore the company’s trust.

The opposite is true: the more a company or individual uses “reputation management” techniques, the more stakeholders disengage and disconnect from the company. Society is simply less credulous.

In the complexity of the New Normal, how can a company with clearly defined objectives, good character and competence, and full awareness of its role in society ensure that it’s perceived as authentic as it is? What does that kind of company look like? How does it form the abstract concept of reputation? To see the path forward, we must look at how society and stakeholders form their perception of any given individual or company.

How Authentic Reputations Are Formed

Authentic connection with stakeholders can only happen when the engagement is based on the company’s true identity. Authentic reputations need to emerge naturally from the company’s identity before any other tactics will work.

According to Richard Woods from Capital One, strong reputations are supported by two pillars. “Pillar number one is becoming famous for something compelling. Pillar number two is managing risk to the company’s reputation. Companies need strategies to ensure that they become well known for the great things they’re doing but don’t become infamous for the other choices they make along the way.”

Understanding the company’s identity will help the company understand what it should and shouldn’t do. Identity is not to be confused with the company’s DNA, although at times, it’s used to imply the same concept. Sue Garrard from Unilever sees the benefit of being aligned with their DNA. She says that “the more your work is tuned in with the DNA of the business, the easier it is to drive change.”

Ingredients of a Company’s Identity 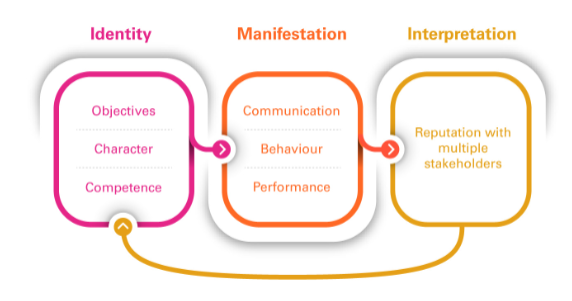 Objectives—Grahame Dowling wrote in Winning the Reputation Game How the company balances the tension between profits and how it adheres to a set of social and environmental goals will determine what type of company it will become.

In today’s business sector, we frequently find companies deploying resources on a large scale without any clear notion of what their purpose is. Companies must be clear about the role of the business in society and align objectives and strategy with the pursuit of the authentic purpose, thus becoming better connected.

The Character component of the company’s identity can be found in its vision, mission, ethics, credo and values. These are the behavioural norms of the company, or “the way things are done here.” Ron Carucci, co-founder and managing partner at Navalent, says the employees want their company’s values to be sacrosanct. When they aren’t, the logical conclusion workers draw is that the organisation doesn’t mean what it says—and that it’s perfectly acceptable to behave in ways that contradict the stated values.

The painful result of widespread misuse of company values, according to one major study, is that only 23 percent of US employees strongly agree that they can apply their organisation’s values to their work every day and only 27 percent “believe in” their organisation’s values. Values hold the power to drive meaningful differences in performance by shaping a culture and when misused, can undermine its performance with toxic force.

Competence is the final component of the company’s identity, which is made up of a cluster of related abilities, commitments, knowledge, and skills that enable an organisation to act effectively in a job or situation. Competence indicates sufficiency of knowledge and skills that enable the business to deliver in line with stakeholders’ expectations, and this will vary from company to company.

In order to the build, the identity that will lead to an authentic reputation, each of these elements needs the same attention. A company will appear untrustworthy in the long run if it is not behaving in line with social norms; even if it’s being very competent in its business and achieving significant profits.

These efforts can be seen as superficial rather than a genuine attempt to be authentic and consumers and other stakeholders have become increasingly suspicious of spin, which is the completely wrong way to deal with the stakeholder concerns that are exposed in the current media landscape.

Trustworthiness depends upon successful relationships inside and outside the organisation; relationships that are based on authenticity.

For any company that makes possessing a value-creating reputation a strategic imperative, it’s fundamental to understand that kind of reputation emanates principally from being authentic (true to your identity) and from being connected with all your key strategic stakeholders.

The Connecting Leader is available in paperback and kindle on Amazon.