Smart Cities Communications: Which companies are leading the way?

Previously confined to works of fiction and utopian thought, Smart Cities are increasingly appearing on the agenda of Communications teams as a potential differentiator for the world’s largest tech companies. The term itself covers a broad church of ideas and applications of various technologies in urban environments. However, the generally accepted purpose is to enhance the quality and performance of urban services such as energy, transportation and utilities in order to reduce resource consumption, wastage and overall costs. Smart Cities are bringing critical infrastructure into the digital age to the benefit of citizens, society and the planet.

Upgrades to infrastructure in cities can be disruptive, expensive and in the case of cutting-edge technologies, require necessary expertise for successful implementation. In light of this, wealthy companies operating in the private sector within the network, telecommunications and broader technology spaces are increasingly working with cash-strapped governments at the local and national levels in order to drive these changes.

Communications professionals now have an opportunity to tell the story of how their organisations are building the cities of tomorrow.

Below, we examine a selection of the most prominent companies leading the charge in 2018 and what some of the key themes driving content have been.

Which companies are leading the Smart City agenda? 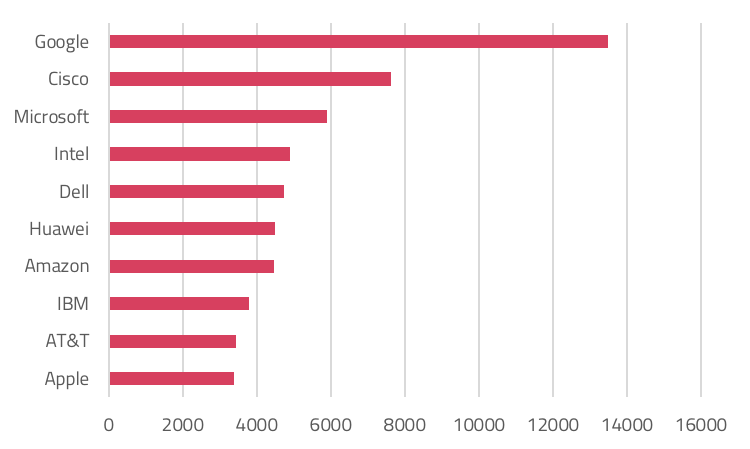 By some margin, the company to generate the most content in relation to smart cities in the first half of 2018 was Google, whose smart city focused subsidiary Sidewalk Labs drove media interest. Last October, Sidewalk Labs signed an agreement with the city of Toronto to develop an unused stretch of waterfront into its flagship project which has been the main driver of content.

Whilst instinctively we might think that the above graph would be an indicator of reputational success – being the most visible company around an exciting, innovative topic – the coverage has been far from exclusively positive for Sidewalk Labs, Google and ultimately Alphabet. Concerns have been raised since the deal was made regarding the lack of public consultation, the level of data surveillance that may be carried out by Sidewalk, and whether it will be the citizens of Toronto or Google that will ultimately benefit.

The last of these three points extends the debate to the role of private companies in the traditionally public realm.

Private companies rarely, if ever, will undertake ventures without receiving something of value in return, and the perceived lack of transparency around its plans for Toronto have led to greater scrutiny and rampant speculation. More broadly, “partnerships” between public and private bodies have come also come under criticism, with critics pointing to historic agreements that ultimately proved to be poor value for money for local governments. This in turn results in criticism of private companies and erodes the trust of citizens in both parties involved.

Elsewhere, coverage on the whole was either a positive driver of reputation for the companies involved, or factual and neutral.

Cisco’s coverage was primarily driven by notably higher activity in forming partnerships with other companies including AT&T, KPMG and Orange. Microsoft, our third ranked company, boosted visibility around this theme through its partnership with Mastercard, as well as its commitment to pledge $5bn towards the Internet of Things.

Intel’s headline grabbing thought leadership pieces in which it ranked the top areas suitable for Smart City development, and claimed that Smart Cities can give back “up to 125 hours” to the lives of their inhabitants, have been effective drivers of content. These digestible, quick-read data points help to encourage both interest and buy-in from citizens who are understandably a key stakeholder group that Smart City companies need to keep onside.

The data shows that Huawei was less active on the intra-company partnership front than some of its peers, but had a strong showing at the Mobile World Congress in which its Smart City partnership with the German town of Duisberg came under the media spotlight. In June, the company also picked up the Smart Cities prize at the Asia Communications Awards.

What can Communications professionals learn from this?

Being part of the digital transformation of the world’s cities presents Communications professionals an opportunity to tell powerful stories of the benefits of these new technologies and their impact on society. Done successfully, these companies may be able redefine their social contract and the role they play in the lives of consumers in a positive way. Given the wide ranging nature of Smart City technologies, there is scope for targeted messaging around improved public safety on roads, environmental benefits, and time savings due to increased efficiency and speed of public transport – all aspects that have the potential to improve citizens’ lives.

When establishing a social contract it is essential to ensure it is aligned with the internal practices of the business. The modern business landscape of hyper-transparency means that companies ought to be upfront and clear from the outset with regard to their intentions in order to minimise or avoid speculation and scrutiny. Likewise, public bodies entering into agreements with private companies should be equipped with a clear and comprehensive strategy in terms of what they would seek from such a deal.

With Smart Cities, public and private agreements best serve society when the outcome is a win-win-win: the public body secures a good deal for its citizens, the citizens enjoy the benefits of the upgraded infrastructure, and the private company profits both monetarily and reputationally. This outcome is not unrealistic, and is one that we should all be striving for.

Soda Tax: How should Beverage companies position their communications?