Sports sponsorship is big business and the Champions League final is the premier club competition in world football. There are currently eight official sponsors of the tournament, many of which are long-term partners, paying around £40M-£45M per year.

As the tournament runs throughout the season, sponsors gain exposure over a significant period, with a cumulative TV audience around 4 billion. The undoubted showcase event in the European football calendar is the Champions League final, attracting an estimated 200 million global viewers.

The week leading up to the final provides the sponsors with a major opportunity to concentrate their long-term efforts and capitalise on the focal point of the whole season.

In the week of the final we analysed all publicly-available content related to the official sponsors and the Champions League to understand which company was most effective at leveraging this opportunity. 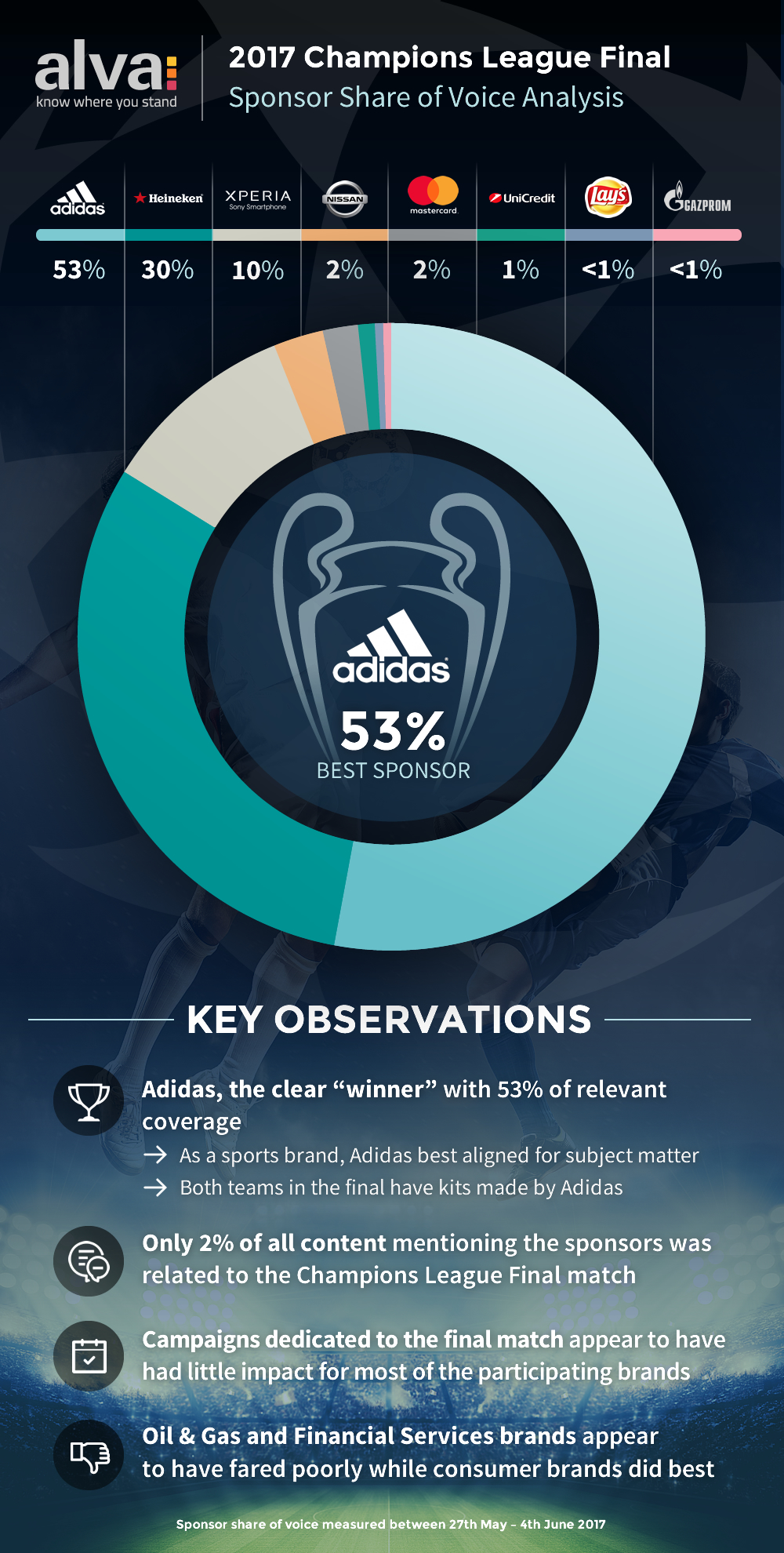 The clear winner is adidas with a 51% share of voice. As a sportswear brand it is most naturally aligned with the event, while it also connects with the younger, social-media savvy demographic in a way that some of other sponsors don’t.

In addition, the German brand was also able to leverage the fact that it was kit manufacturer for both teams in the final, as well as the boot sponsor of a number of prominent players in the game.

Heineken has sponsored the competition since 2005 and its long association helped it come second with 30% share of voice. Heineken’s #ChampionTheMatch campaign was one of the single biggest drivers of engagement across all the sponsors.

Sony has also been a long-term sponsor of the tournament and its recent campaign focused on Xperia so we have isolated this brand. Content related to  Xperia received 10% of the share of voice, making it the third most visible sponsor. However, Sony has many other sub-brands which it can use to reach a wider audience, especially Playstation, so its share of voice will increase when the wider family of brands are considered.

Conversely, Nissan is only in its second year as a sponsor having replaced Ford, and although it was one of the top four performers, it only received a 2% share of voice and struggled to maximise on this occasion.

The financial sector brands and Gazprom had very little visibility during the final suggesting their strategy is more around longer term brand awareness and positioning than active engagement.

Walkers had a disastrous campaign when its “Walkers Wave” initiative was sabotaged and subsequently removed, meaning it had no real visibility during the crucial week of the final. However, its parent company Pepsico was able to turn to other brands like Pepsi Max to successfully engage with a similar audience during the event. If we included the wider Pepsico group, its share of voice would have increase to 3%, placing them fourth behind Adidas, Heineken and Sony.

While this analysis has focused purely on share of voice, when alva investigated the optimum way to measure sports sponsorship effectiveness, we found that companies need to consider three components: Visibility, Likeability and Advocacy.

It is only through measuring the impact of each of these factors that a company can understand if the outcomes of its sponsorship efforts have met its business goals.

If you’d like to know more about how alva can help you accurately measure your sponsorship efforts, please contact Mark Wilson:
mark.wilson@alva-group.com
+44 (0)203 735 9793

Footnote: Brands sponsor the competition for the full year – this analysis covers over 270,000 pieces of content between 27th May – 4th June 2017 and does not take into account the continued brand exposure.