Did sponsorship of the Olympics or Paralympics give greater returns?

As the 2016 Paralympics came to a close, we were keen to understand how sponsorship of this event compared with our earlier report on the effectiveness of sponsorship for the main Olympic Games.

alva analysed all publicly-available global English language content for the 10 Global Olympic and Paralympics Partners in the 12 months prior to the Games and for the duration of the two events to determine which generated the greatest returns for sponsors and which brand performed best overall.

While some analysis of the Olympics focused solely on mentions of the brand in relation to the Games itself, we felt that this approach failed to take into account how brands can influence conversations indirectly and the way in which language is used, particularly in social media.

What we wanted to understand was the change that brands saw in their Visibility, Likability and Advocacy from their sponsorship – how did the Olympics and Paralympics affect these three measures compared with what could statistically have been anticipated? To do this, we compared the 10 brands’ 12-month averages for the three metrics to their performance during the Games.

Our full Paralympics analysis was featured in PR Week, but the key findings were:

Overall, therefore, if brands wish to boost their Visibility, then the Olympics is a better bet, provided that they leverage their sponsorship effectively. However, Likability can be more effectively achieved via strong engagement with the Paralympics and the competing athletes. 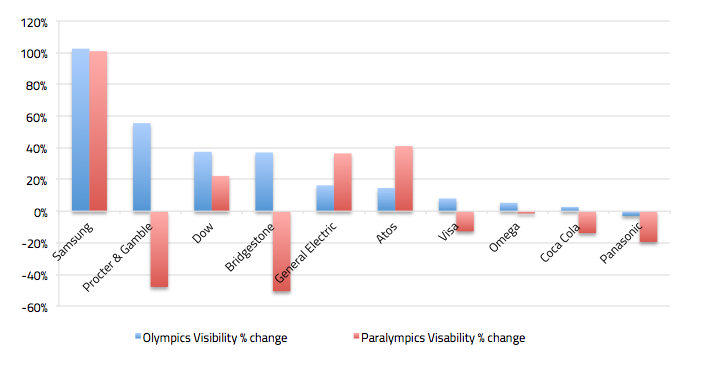 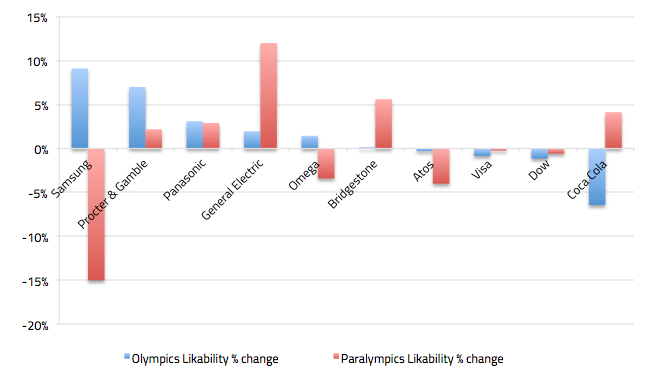 Download the full free report on measuring the effectiveness of sponsorship at the Rio Olympics.