During student account season it’s typical to see refreshed offers and campaigns as banks court the incoming student population. Student and consumer media publish surveys and recommendations on the “best deal”, while students themselves comment through social media on the account to go for and those to avoid.

All this amounts to a flurry of activity for the banks, students and media during the three-month window of July-September each year. This, in turn, creates a unique opportunity to analyse these voices and their impact on reputation.

So, which issues had the most impact on sentiment towards student accounts? 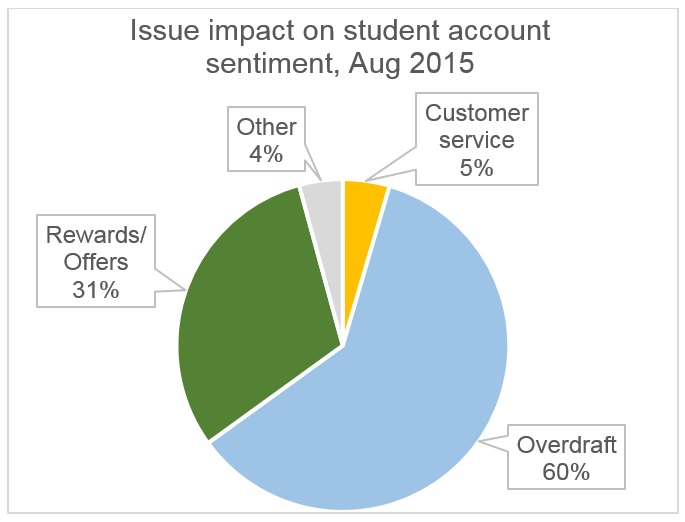 HSBC’s £3,000 “generous” interest-free overdraft caught the eye and recommendation of a number of influential consumer titles. The bank also benefited from helping students “stay on top of their finances” by not allowing them to “stray” into high-interest unauthorised overdrafts and alerting them to withdrawals being made within their overdraft. This drew favourable comparisons with Halifax, which offers a £3,000 annual overdraft but “huge” unauthorised overdraft rates.

Sentiment in 2015 is more ambiguous towards account offers than in 2014, with mainstream media admonishing students to “give freebies a wide birth”, avoid “bribes” and instead focus on “cheap overdraft deals”. Nevertheless, Santander’s free four-year railcard offer has played a key role in bolstering advocacy towards its student accounts. Combined with its £1,500 interest-free overdraft, industry heavyweights such as Martin Lewis recommend Santander for ticking two important boxes.

Making the transition to student living can be an emotional time, particularly during “student season” in July-September. In some cases, students look to warn their comrades during this time of the customer service pitfalls of their account opening experiences, while others are anxious over delays to account activation and confusion as to applications have been declined. However, First Direct’s reputation for good customer service is bolstering recommendations among some of the bigger-hitting providers such as Santander and NatWest.

VW’s Emissions Admission – has this poisoned its reputation with customers?

Three lessons from banking glitches – “why should I stay with you?”