The reputational benefits of social finance in investment banks

In recent years, the social finance “boom” in investment banking has been covered by national media extensively as investment banks such as BNY Mellon, Northern Trust, Blackrock, and Goldman Sachs have framed social finance strategies around social entrepreneurship and impact investing. Through social finance, entrepreneurs and investors can see a return in financial assets whilst making impactful social changes. As such, The Guardian projected a 30-40% growth in the sector in 2014, with the rise of prominent conferences such as the Social Finance Forum in Toronto and the Social Finance Fair in Birmingham in 2015.

With the rise of social finance, alva’s comprehensive content monitoring and analysis technology was used to investigate the reputational benefits of incorporating social finance strategies in investment banking.

In this analysis, we address the following questions:

How did social finance drive sentiment within the investment banking sector in July-December 2015?

The graph below shows the average sentiment* of Blackrock, Northern Trust, BNY Mellon and Goldman Sachs in four areas.

Fig I. Sentiment scores in four areas within investment banking 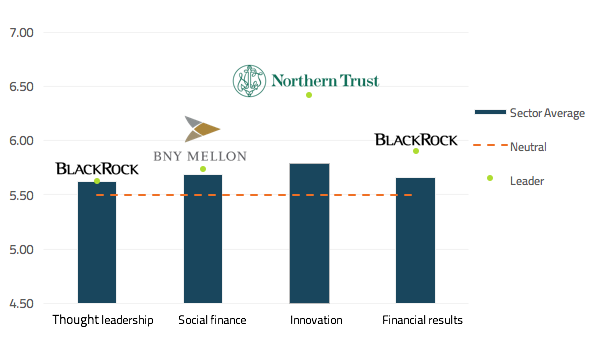 alva’s insight analysis has found four issue areas of financial results, thought leadership, innovation and social finance that have consistently driven sentiment within investment banking during the period. Of the four areas analyzed during this period, social finance had the second highest score, driving positive sentiment in the sector.

Of the four companies, BNY Mellon ranked highest for social finance, with a score of 5.74, scoring 7.2% above the competitor average.

BNY Mellon placed first in the competitor set in part due to positive media coverage of the announcement of the $1m winners of its social entrepreneurship contest, UpPrize. UpPrize’s “purpose-driven” approach addresses the world’s most “pressing issues” by bridging the gap between entrepreneurs and non-profit communities.

What kind of media coverage did social finance generate?

Media coverage of social finance across all four competitors was primarily neutral and positive. Blackrock topped the competitor set with the highest sentiment score and share of voice, driven primarily by coverage of the firm’s “strategic” and “major” Impact World Equity Fund “boosting” the impact investment sector. Northern Trust received largely neutral coverage of its initiatives to “pursue opportunities” in the social impact bond space “despite the complexity of the transactions”

However, BNY Mellon received the highest volume of positive coverage of its social finance strategies. 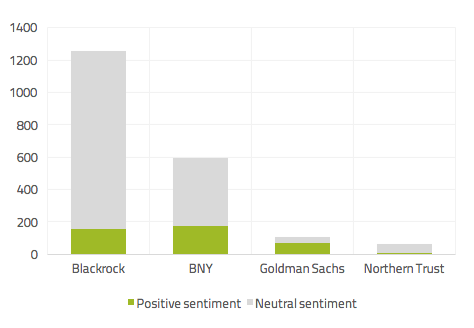 Initiatives in social finance can present emerging reputational opportunities for investment banks that have previously faced reputational risks. In October – December 2015, Goldman Sachs experienced a +0.12 rise in its reputation score from 5.47 to 5.59  largely due to positive coverage of the “success” of its social impact bonds, including those which aids schoolchildren in Utah. This initiative received coverage for being the first time a social impact bond “paid off” for investors in the US. Furthermore, Goldman Sachs’ “most promising idea” of its social impact bond for schoolchildren helped improve its financial results, as covered in the New York Times. These two examples demonstrate how a strong reputation in social finance can be linked to healthy stakeholder relationships with investors, communities and customers, and have an overall impact on business performance.

The analysis indicates that social finance related strategies can positively impact investment banks, with the opportunity to benefit from the goodwill generated by positive media coverage of these initiatives.

*Content volumes represent the number of daily average mentions of individual pieces of coverage (print, online, Twitter, etc.) for each of the service areas monitored.

How to best communicate an automotive product recall