PwC’s annual report on the top insurance industry issues, suggested that 2016 could be the year when technology becomes a more prominent issue in the previously traditional sector.

With the insurance industry potentially entering a period of flux, we wanted to understand what issues are filtering through to the mainstream and affecting how the public views the industry.

Our analysis seeks to answer the following questions:

Which insurance companies generated the most positivity in 2016? 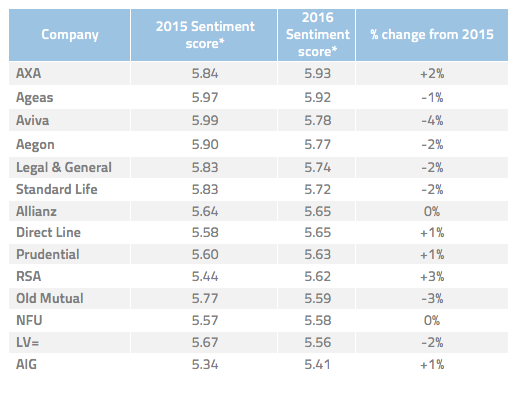 Figure i shows that all but one of the featured brands have generated a positive sentiment score (5.50 being neutral*). In isolation this suggests the sector is in good health and the traditional brands are matching or exceeding customer expectations.

If we take a longer view, AXA, Ageas, Aviva and Aegon ranked in the top four for sentiment in both 2015 and 2016. However, AXA was the only brand to see an increase in sentiment, while the other top insurers had a slight drop in their overall sentiment scores.

RSA showed the biggest improvement of 3% among the featured companies, but there were only marginal gains elsewhere.

Which issues generated most positivity for the insurance industry in 2016? 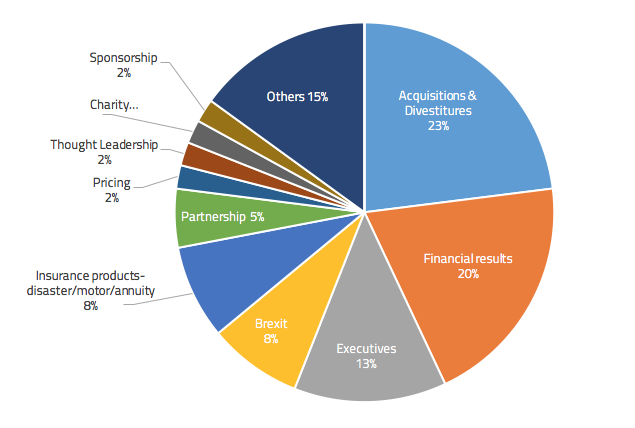 In order to further understand the current insurance landscape, Figure ii breaks out the 10 most impactful positive issues in the sector.

Acquisitions & Divestitures, Financial results and Executives contribute more than 50% to the sector’s sentiment score. This shows the importance in getting communications correct around the major company announcements such as quarterly results and executive pay.

Conversely, softer brand building activities like Thought Leadership, Charity, and Sponsorship, appear to be less impactful than larger corporate related issues, indicating the sector has had little success personalising their brands with their target audience.

The reaction to the Brexit vote seems to be more complex for the insurance sector. Despite initial concerns that the insurance industry was “hit hard” by the decision, with shares falling heavily, it has actually been the 4th largest driver of positive sentiment for the sector. This was partially due to announcements from brands like Aviva (“Brexit will have no operational impact on the company”) and Prudential (“We do not expect the result to cause any significant change to our operations in the foreseeable future”), which were quick responses designed to mitigate negativity around the vote.

There remains significant uncertainty within the industry, especially around the use of single market rules to access one member state from an office in another, but this has not filtered down to mainstream public concern. Some insurance companies, such as AIG, are attempting to capitalise on the uncertainty by launching “Brexit insurance”.

While innovation in technologies is gradually influencing the insurance industry, it hasn’t show much impact to brand sentiment yet. As it is a relatively new issue to the industry and few insurers have taken actions on it, it hasn’t received much coverage compared to other existing issues. This could present an opportunity for a brand to own this space and differentiate themselves from competitors.

What were the most important issues for the top insurance companies in 2016? 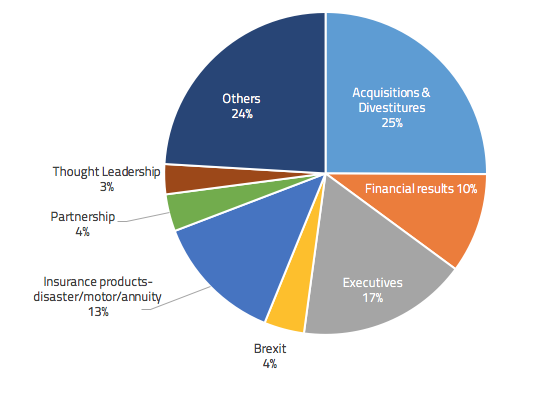 AXA topped the sector for 2016, increasing its overall sentiment score by 2% from 2015. AXA was quite representative of the wider industry, with strong sentiment gains from the issues traditionally associated with the industry, including:

Acquisitions & Divestitures: Positive coverage of AXA selling its investment and pensions business and its direct protection business, SunLife, to Phoenix Group Holdings in May had a significant impact on its overall sentiment score.

Financial Results: AXA made an underlying profit of £138m in H1 2016, but was able to emphasise the success of its UK personal motor division, with the media highlighting it “enjoying” an 8% revenue uplift. 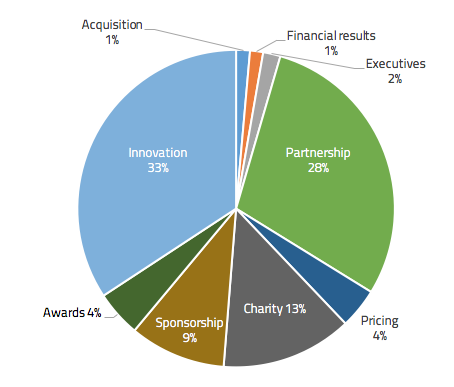 Ageas ranked second in the sector in both 2016 and 2015. In contrast to AXA and the wider industry, the single biggest positive contributer towards Ageas is Innovation. This is closely followed by “Partnerships”, an area where Ageas has also highlighted the benefits of extending its ”innovative solutions and expertise”.

Innovation: This issue was not one of the most impactful for the wider industry, but it has generated most positivity for Ageas. It launched Back Me Up, an internal start-up offering online-based possessions and travel insurance products which are tailored to suit the lifestyle of millennial consumers. This highlights the reputational opportunities available if a company takes a new approach within a traditional sector.

Partnership: A £300m partnership with Towergate-owned Arista generated a lot of positive coverage. The media also reacted well to the news that Ageas will be able to provide brokers more “competitive” products through the partnership with Keychoice.

The issues driving positivity in the two top insurance companies highlight two possible routes for the wider industry. The fact that almost all the companies analysed score above neutral for sentiment shows that there is still much to gain by focusing on the traditional issues important to insurers. However, Ageas’ success shows that there is the potential for the industry to break this mould and generate strong public sentiment from innovative solutions.

The insurance industry continues to be dominated by traditional business issues. Acquisition, Financial results and Executives are still the most impactful issues to the sector and most of 2016’s top performers. As these are all predictable events that have long-lead times, there is no reason for the Communications teams to not be prepared. It is therefore vital that they understand the underlying factors which influence stakeholder responses to these announcements.

This shows that the main players in the industry are likely to get the best returns by focusing on the basics. However, with the increase of innovative “insurtech” start-ups, they can’t afford to be complacent. Ageas has shown that there is scope for an established brand to build a strong reputation around innovation. The lack of wider visibility for this issue suggests that there is still the potential for them or another company to really establish themselves as the market leader in this area.