The Tory Leadership battle took another twist today, with Andrea Leadsom withdrawing from the race and apparently leaving the way clear for Theresa May. Pressure had been building on Leadsom over the weekend, but her position in the race was still by no means untenable.

If we look at the five-day sentiment* trends for Leadsom and May, it reflects the media headlines focused on Leadsom this weekend. 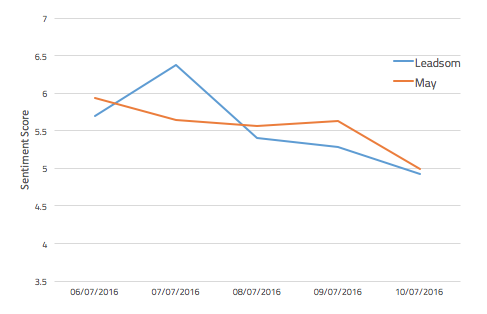 Leadsom had been building momentum with the public, dominating conversations on social media and overtaking May’s sentiment trend by 12% on Thursday 7th July. However, as claims that she exaggerated her CV emerged, Leadsom’s sentiment began to dramatically fall, dropping 16% after the story broke.

The negative media analysis continued after she stated in an interview that being a mother made her a better candidate than May. By Sunday, this had led to a 23% fall in sentiment from her high point on Thursday.

However, while the drop in sentiment would appear to confirm that Leadsom was correct to quit, it is revealing that May was also affected negatively by the coverage. Rather than consolidating her position as the favourite, May’s sentiment was declining and actually running very close to Leadsom before she quit.

May’s sentiment fell 16% between Wednesday and Sunday despite keeping a relatively low profile during this period. This decline appears to be a response to the negative media coverage for Leadsom, suggesting that Leadsom retained significant external public support and may have been premature in withdrawing from the race.

As we can see from this episode, a week really can be a long time in politics, and had Leadsom remained in contention she could have had ample time to recover her position and mount a real challenge.

* Footnote: The methodology – how do we calculate sentiment scores?