What are the reputational risks of doing business with Iran?

In recent weeks, the lifting of sanctions on Iran has generated much media and social media attention. The focus has been split between the business opportunity this new market represents and a resurgence in critical voices rallying against doing business with the country due to allegations of human rights violations, the funding of groups considered terrorists and remaining sanctions on its ballistic missile programme.

With the Oil and Gas sector one that is centre stage in this discussion, alva used its comprehensive monitoring and analysis technology to investigate the reputational impact of doing business with Iran for Oil and Gas majors.

Figure I: Scope of Analysis

Which stakeholders are most vocal?

Civil Society and NGOs are often considered some of the most vocal critics of the Oil & Gas sector as social media has increased the visibility and influence of these two groups. However, Civil Society and NGOs typically act only as influencers on the sector’s most influential stakeholders, which are often Regulators, host Governments and Investors.

The graph below shows how much content each stakeholder group generated on the subject of Iran before and after the sanctions were lifted.

The standout finding from the above is how discussions by NGOs and Activists pales in comparison to the coverage generated by Investors and Governments. Whilst this should not discount the importance of NGOs, it demonstrates the importance of the issue to these two stakeholder groups in particular.

How are different stakeholders driving sentiment?

While it is clear that Investors and Government have been most proactive in discussing Iran in connection with the Oil and Gas majors, this does not tell us how they are influencing the issue.

The graph below shows sentiment for Investors, Governments and NGO/activists, with sentiment scored before and after the lifting of sanctions on the 15th of January. 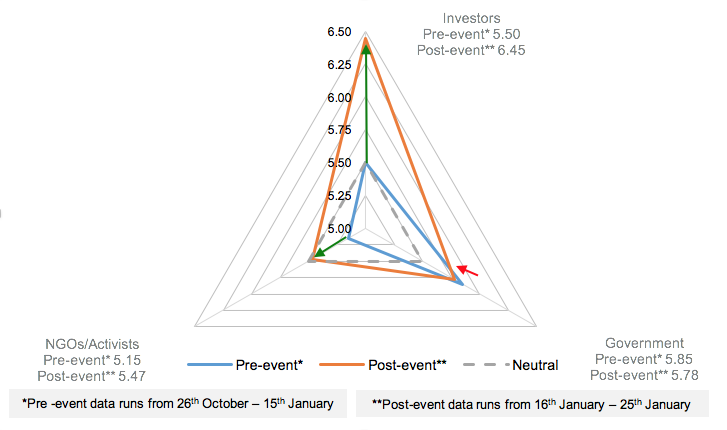 The graph shows that following the sanctions both Investors and NGOs improved in sentiment and Government dropped slightly. The drivers of this sentiment for each stakeholder are detailed below.

⇑ Positivity from Memoranda of Agreements being signed in November 2015 between majors and the country.

⇓ Negativity from the US government warning companies not to do business with Iran before sanctions are lifted and speculation on US companies “missing out” even after restrictions are withdrawn.

⇑ Positivity is generated around discussion of potential deals.

⇑ Company executives state that the sanctions lift will contribute towards the European system having a more diversified energy supply.

⇑ Additional positivity comes from Shell agreeing a $2.3bn debt payment to Iran that will be implemented after sanctions are lifted.

↔ Coverage is more neutral and matter-of-fact, with a reduction in discussion of economic benefits

⇓ The seizure of US sailors by the Iranian armed forces catalyses for negativity. The issue generates broader discussion of the country allegedly funding terrorist groups and negativity around executions with coverage referencing oil majors as “overlooking” the country’s human rights transgressions in the pursuit of profit.

↔ The lifting of sanctions prompted a reduction in negativity from NGOs. Whilst discussion continued, negativity shifted away from Oil & Gas majors, prompting a return of sentiment towards the neutral point.

At present, the analysis reveals that messages around companies being keen to transfer technical knowledge to Iran, the tangible benefits of job creation and economic contribution and a narrative around how Iran’s return will help Europe diversify its energy supplies are the issues resonating most positively with key stakeholders.

We can summarise the positioning as follows:

(1) Content volumes represent the number of average daily mentions of individual pieces of coverage (print, online, Twitter etc) for each of the stakeholders tracked.