Over the past year, alva’s analysis of the defence sector has seen an increase in competition among manufacturers to position their organisations as focused on “Technology” and “Innovative” or “Cutting Edge” developments in this area.

In light of this apparent sector-wide positioning, alva used its comprehensive monitoring and analysis platform to investigate whether this shift was reflected in the data and indeed which companies were leading the way in this domain and why.

Is technology an increasingly important driver of sentiment and visibility for defence companies?

Figure II shows how much content was generated on average each month over the past year on the subject of technology in the defence sector.

The graph clearly shows that over the past year, coverage around technology has increased with volumes skyrocketing in November after the Paris attacks, which saw governments around the globe putting security as their top priority and led to an increase in defence budgets. Technological advancements for combat purposes have been presented as a key component of an effective military deterrent to terrorism. Alongside this, there has been a burgeoning interest in the use of defence technology for civilian purposes, with drone deployment an example of this application.

For defence companies, technology has therefore become of central importance both to its military and civilian strategies.

Which defence companies are most effective at communicating technology messages?

Looking in more detail at the companies tracked within the defence sector, it was clear that three organisations were particularly successful at generating both visibility and positivity on this issue. These were: Northrop Grumman, Raytheon and BAE Systems.

The graph below shows the top three companies for technology in the defence sector based on alva’s sentiment score*. 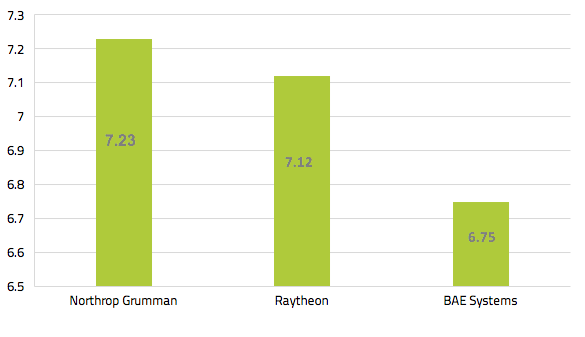 Northrop Grumman topped the defence sector for technology, largely for its focus on the civilian application of its technology. The company was very effective at emphasising the link between skills and technology, with a number of initiatives highlighting this pairing mainly reported by national and trade sources. Most prominent were Northrop Grumman’s Fab School Labs science classroom makeover contest and its investment in the University of Maryland’s Advanced Cybersecurity Experience for Students program.

Raytheon ranked second with a more even split between the civilian and military applications of its technology, with civil aviation, weapons systems and cybersecurity its areas of focus. Most impactful coverage centred on the opening of its Terminal Radar Approach Control (TRACON) facility in Atlanta’s Hartsfield Jackson Atlanta International Airport and its partnership with Riyadh-based Advanced Electronics to explore collaboration on weapon systems, integrated sensors, commercial flights and cybersecurity.

BAE Systems ranked third for technology in the defence sector with a good balance between the military and civilian aspects of its technology, receiving positive sentiment mainly by national and social media sources. Commercial flights and cybersecurity featured prominently in its communications. The company received extensive positive sentiment for investing in Reaction Engines receiving positivity from national and trade media and also from blog sources. The company’s reputation was boosted due to national and social media coverage of it being hired by TalkTalk to investigate the cyber-attack and address cyber security challenges.

The data makes it clear the technology is an increasing area of focus for defence companies, both from the military and civilian perspectives. However, technology for civilian applications is much more visible, generates greater sentiment and is more widely shared than military technology.