Business & the Pandemic: What the data shows

In response to the unparallel change of circumstances brought about by the pandemic, over the last six weeks there has been a flurry of initiatives from business across many sectors.

If we take a closer look, we are able to see similar themes and trends explaining how businesses have responded to mitigate the impact to the different stakeholder groups: colleagues, customers, communities, shareholders and society at large.

The rapid spread of the virus caught businesses and governments by surprise. During this initial Shock Phase, under the banner of “we are in this together”, we have seen reactive, selfless actions designed to mitigate the imminent damage of those that were at most risk such as front-line workers, the elderly and the unemployed, almost at any cost.

As we come out from the initial shock, business and society is starting to look for answers and is coming to realise that the problems that were identified before the pandemic have become more vivid. During the Existential phase that we are entering, we are likely to properly contemplate what will happen if things stay much the same as they were before. In the coming weeks and months, we should expect businesses to be forced by stakeholders to question the suitability of former practices and business models.

Phase One: In it Together

The Shock Phase started around the middle of March and ended towards the middle of April. During this phase “business as usual” stopped abruptly and those businesses that were fortunate enough to survive, responded with empathy and resolve by reaching out to stakeholders to support them through their own period of shock, fear and adjustment.

In the context of Maslow’s hierarchy of needs, the shock causes a significant shift from the top of the pyramid to nearly the bottom. Moving from the Self-actualisation level, where we aspire to become the most that one can be, to the Safety level where our dominant concerns are the preservation of our personal security, health, employment can’t be done without the help others.

In response we have seen businesses and governments pouring resources and millions to support the most affected. Initiatives ranging from employee job reassurance, CEO salary sacrifice, donations, support for healthcare professionals and vulnerable customers, manufacturing of PPE to mortgage holidays.

Figure I: Top 10 most impactful initiatives during Shock Phase 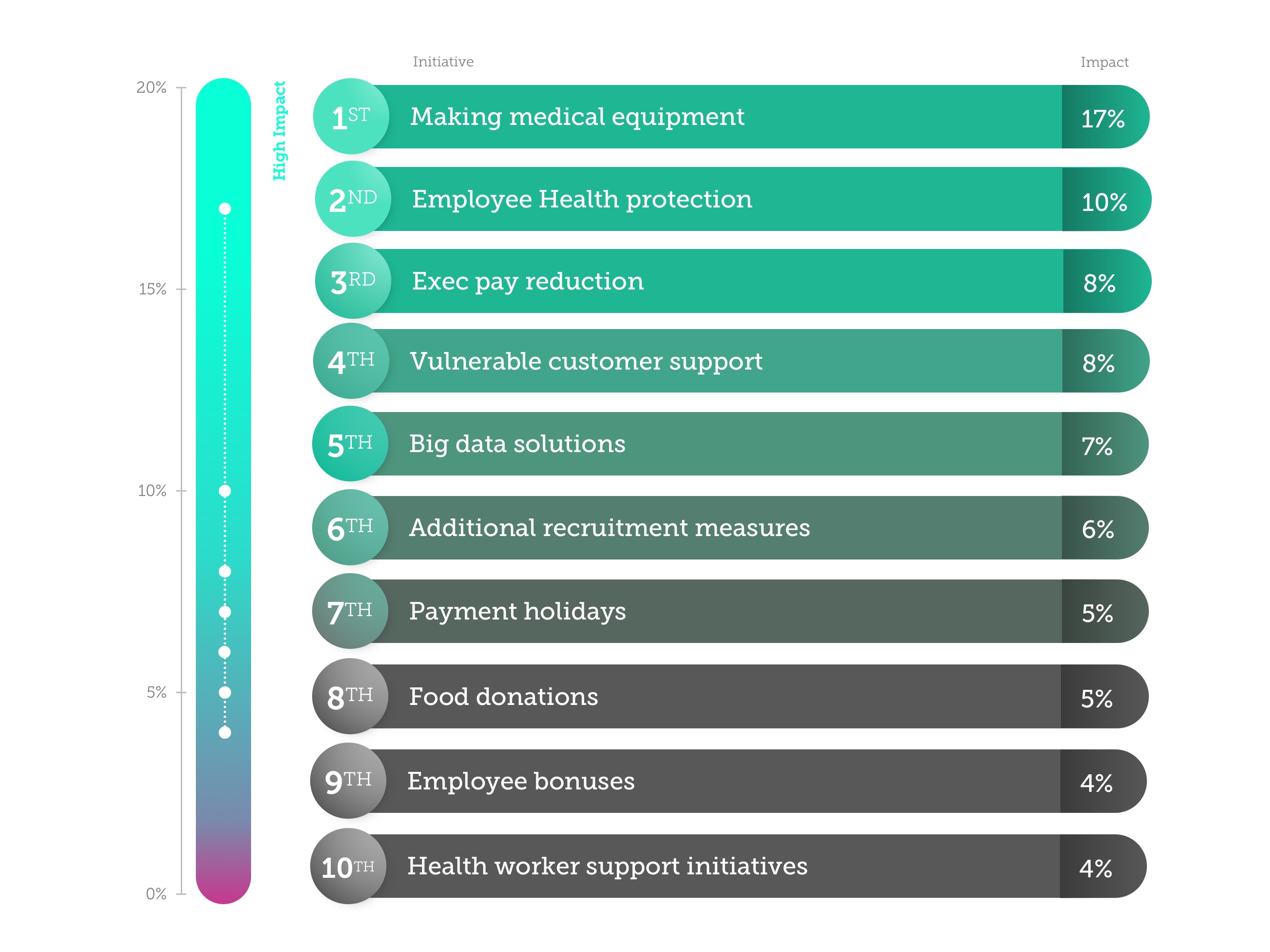 Countless Initiatives of solidarity, fairness, responsibility and compassion have provided the much-needed hope and resources to deal with the sudden shock caused by the pandemic. The belief that human ingenuity and pulling together in times of crisis will lead us out of has persisted and empathy and togetherness have been the dominant themes during the Shock phase. 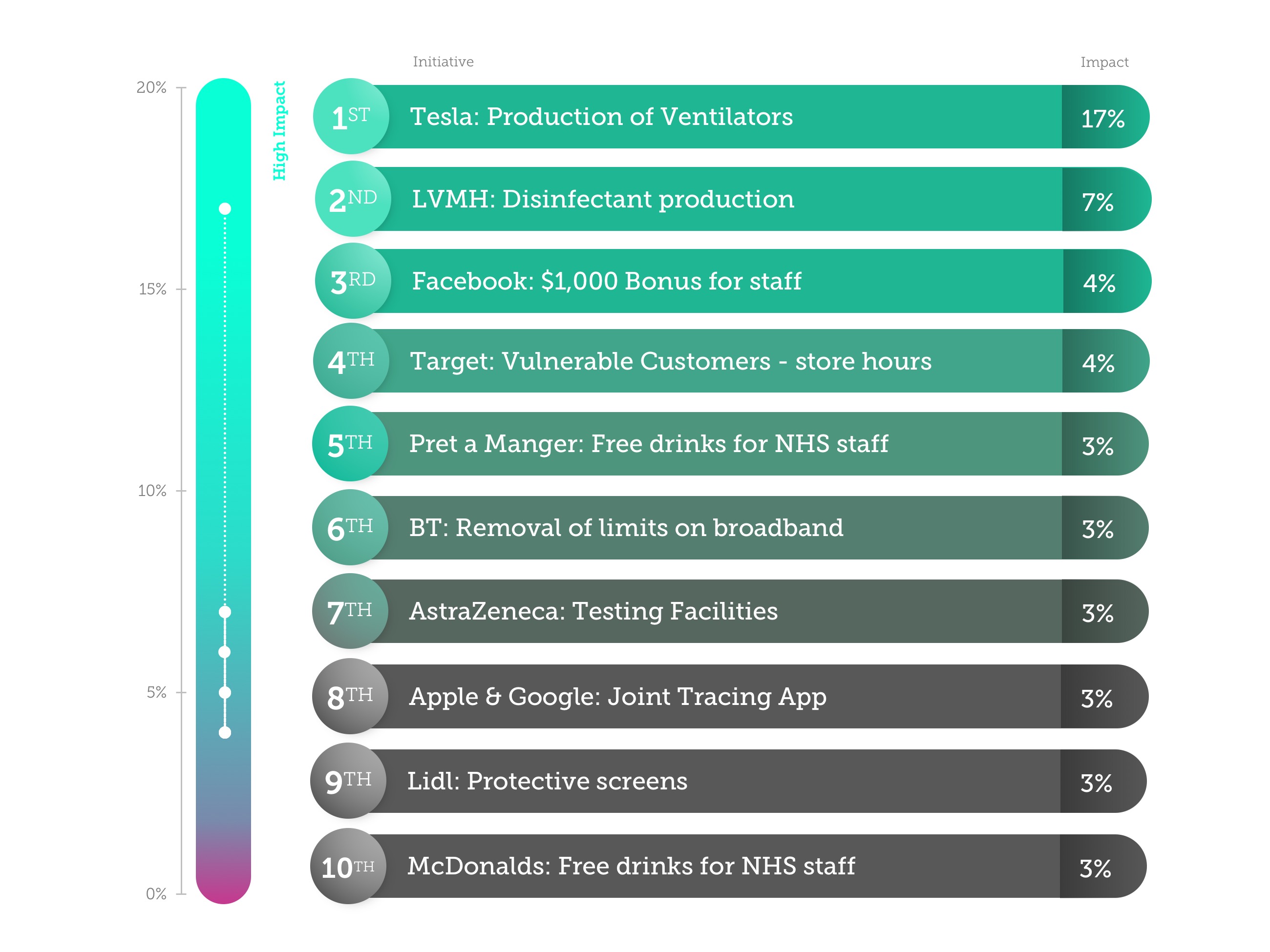 Phase Two: Out with the old, in with the new

As communities begin to feel safer, businesses are seeking to gain a better understanding of the impact of the pandemic and make more pragmatic decisions, balancing their own survival with their future focus.

We can see from the data that in recent weeks, there has been a shift in corporate attention away from philanthropic announcements regarding support for communities, onto more of an internal focus on employee support and reassurance as part of a back to work drive. 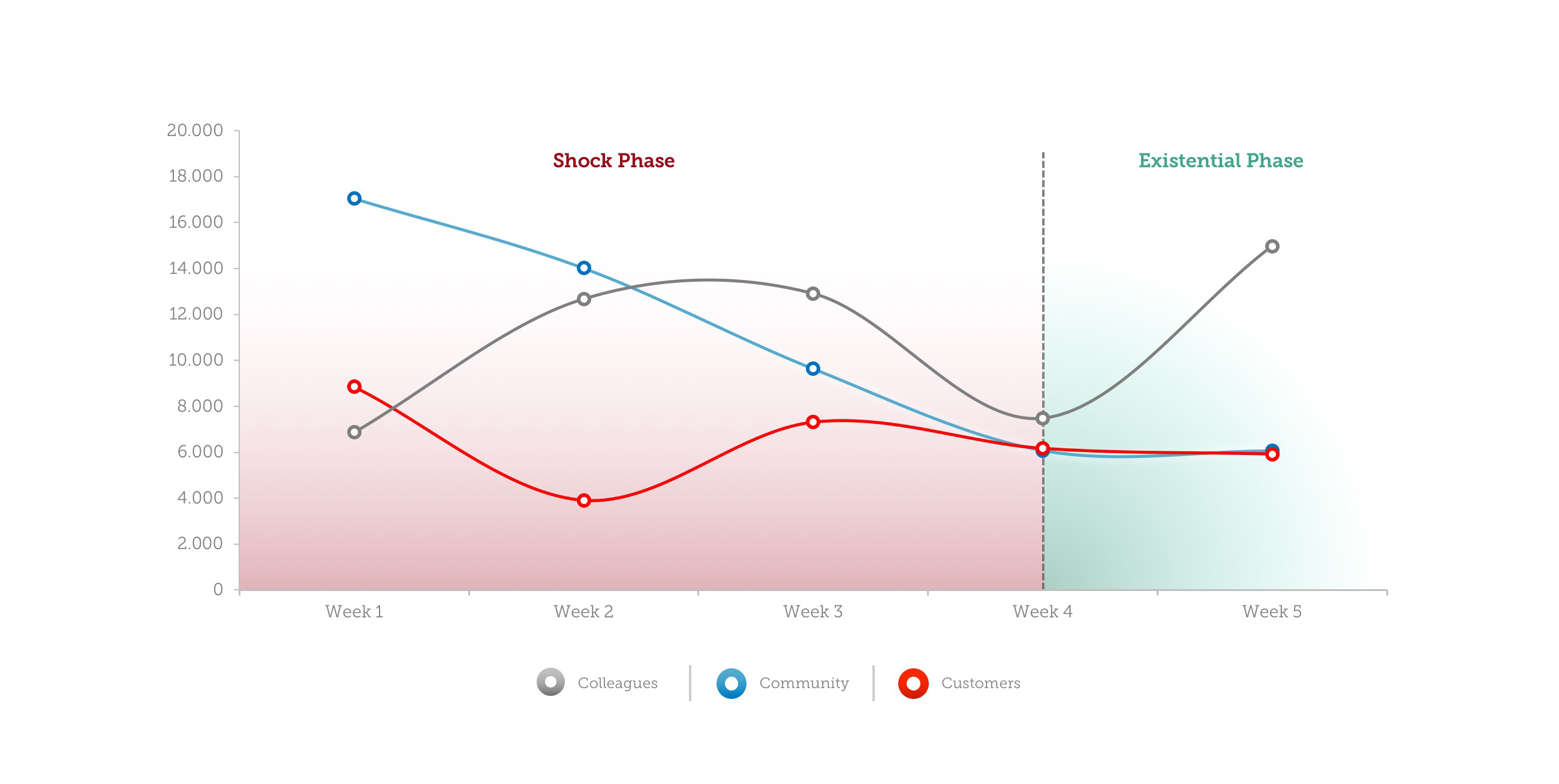 In this phase we might see businesses moving away from shareholder primacy, i.e. the belief that companies must maximize shareholder returns at all costs. There are already loud voices actively highlighting the flaws of the current model of capitalism: when 93% of profits being devoted to either dividends or stock buybacks to enrich shareholders and executives doesn’t seem fair when governments must intervene to bail out entire industries to minimise unemployment.

Another dominant theme that is likely to emerge from this crisis is the threat of Big Government to society. One group of technologists, civil liberty groups and academics has warned that the combination of the [new emergency coronavirus] bill with existing far-reaching data-gathering powers creates the risk that location and contact-tracking technology could be used as a means of social control.

These are big themes that will not be answered overnight, however will determine future expectations from multiple actors. In the coming weeks and months, we are likely to see that as businesses are forced to do more with less, many will find better, simpler, less expensive, and more inclusive ways to operate. We will see new models to tackle what are likely to be the next big themes: global healthcare, global equality and global climate change.

Those that are not prepared to listen and change, are unlikely to make it.

What are ESG ratings?

The first rule of Purpose is: You do not talk about Purpose