Flygskam and Airlines: to engage or not to engage

The concept of “Flygskam” or “flight shame” and its many linguistic equivalents – including flugscham, lentohapea, avihonte, vliegschaamt – has rather captured the media’s imagination of late, catalysed by the high profile of Greta Thunberg and her very public support of the movement.

We can clearly see the rapid growth of interest in this concept by carrying out a volumetric analysis of all publicly available content relating to the topic over the past 3 years in the chart below.

Figure I: Discussion of concept of “Flygskam” across global public content

This graph highlights the rapid acceleration of interest in the movement, propelled by initiatives such as encouraging people to fly less as part of their New Year’s resolutions.

More recently, a survey of over 6,000 people in the US, France, Germany and the UK by Swiss bank UBS reportedly found that 21% had reduced the number of flights they took over the last year. This tallies with a similar study by the World Wildlife Fund which found that 23 percent of Swedes have abstained from traveling by air in the past year to reduce their climate impact, up 6% year-on-year.

While some may be tempted to dismiss or devalue the figures as affected by virtue signalling inherent in surveys related to ethical consumption, Bloomberg reports that Swedish airport operator Swedavia AB, has seen year-on-year passenger numbers drop for seven consecutive months. Last year, Sweden reportedly had its weakest overall growth in passenger numbers in a decade.

The airline industry is worried. “The sector is under considerable pressure,” admitted Alexandre de Juniac, chief executive of the International Air Transport Association (IATA) and some operators – particularly those operating prominently in the Scandinavian birthplace of the movement – have sought to take a proactive stance on the issue.

Scandinavian Airlines (SAS) in particular has been on the front foot over the past few months, announcing plans for hybrid and electric planes, greater use of biofuels and a reduction in the weight of its planes themselves. Dutch airline KLM caused consternation by launching a campaign calling on people to fly less with video and open letter from CEO Pieter Elbers asking: “Do you always have to meet face-to-face?” and “Could you take the train instead?” Qantas CEO Alan Joyce has also been vocal on the need for airlines to be involved in tackling climate change, while stating that simply not flying was a retrograde step.

An interesting consideration for Communicators at airlines is how much to engage on this issue and what the likely outcome of a more proactive stance might be. Data on this is limited at the time of writing, but we can already see indications of who has the most to win or lose from this debate.

Figure II: Ranking or Airlines by Share of Flygskam references 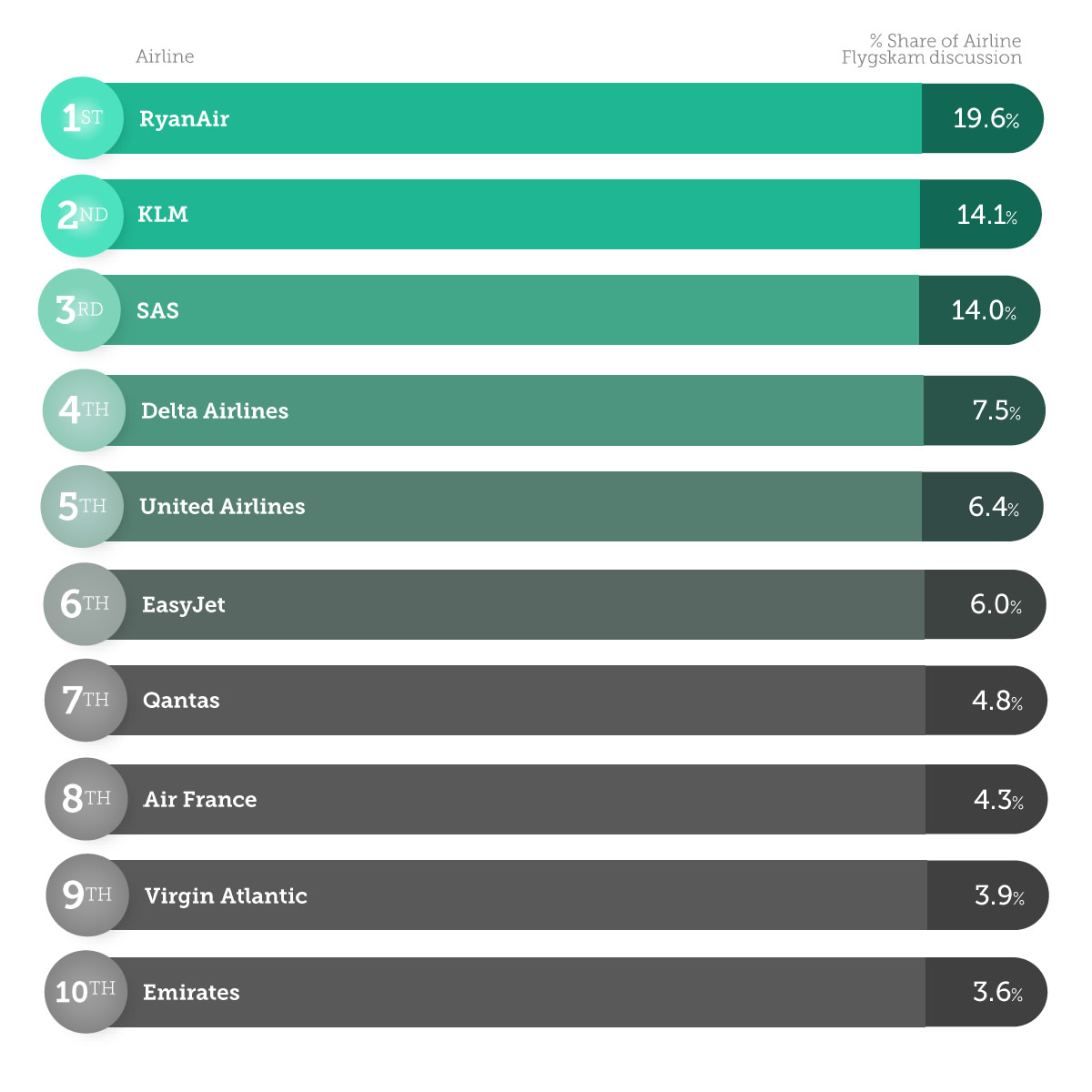 Digging a little deeper, we can identify some interesting emerging patterns from this data set.

Firstly, the three firms that have been most vocal on the issue: SAS, KLM and Qantas all unsurprisingly feature in the top 10 rankings. However, SAS and KLM’s coverage is characterised by a higher % proportion of positive and neutral reporting (75%) – testament to their proactive stances backed up by concrete suggestions or plans. By contrast, approximately 80% of Ryanair’s coverage is negative in sentiment.

Secondly, the presence of Delta and United Airlines is driven by the jacking of the Flygskam movement for the purpose of complaining about noise pollution by local residents. We can anticipate an increase in this type of hashtag or trend jacking for the Flygskam movement in the coming months as people increasingly use it as a protest mechanism for a variety of different issues with airlines.

Finally, the two companies attracting most negative coverage in the rankings – Ryanair and EasJet – are both low-cost carriers. These are primarily targeted because they are high profile short-haul carriers whose routes are seen as unnecessary and therefore more damaging. They are also the companies that generally have the weakest pre-existing reputations, so are often an early lightening rod for criticism. These two factors suggest that budget airlines are likely to be the focus of the movement going forward.

With the movement showing no signs of abating in the coming months, airlines and their communications teams will need to carefully consider how they engage on this issue. The early indications are that not engaging is not a sustainable option.

The Alliance Between Growth and Social Purpose