How are neobanks’ reputations impacted by their gender pay gap reporting?

Unequal pay in UK corporations has made headlines since the publication of gender pay gap data became a regulatory requirement. Provisions in the Equality Act 2010, which came into effect in April 2017, mandate any employer with 250 or more contracted employees to release its statistics to the government’s gender pay gap service.

Financial institutions have subsequently been exposed as particularly poor performers on the equal paying field. On 25 February 2022, the TUC heralded ‘Women’s Pay Day’, the date the average female worker would start getting paid if she received the same hourly rate as the average man. In finance and insurance, women worked for free until 27 April. The widest in any sector, this 32.3% pay gap means women in finance wait the equivalent of 118 days to ‘start’ getting paid.

Corporate stakeholder focus on gender parity, particularly at senior levels, has intensified over the past decade. Global research by Morgan Stanley shows gender diversity promotes innovation, enhances employee satisfaction, attracts diverse talent, and reduces reputational risk – resulting in outperformance of peers. According to Grant Thornton’s 2022 Women in Business report, diversity initiatives have led to a 10% rise in the proportion of senior female leaders worldwide since 2012, reaching 31%.

Nonetheless, the UK’s gender pay disparity continues. ONS data shows the average gender pay gap for full-time workers in 2021 was 7.9%. With stakeholders scrutinising diversity and inclusion (D&I) performance, businesses looking to differentiate themselves, and protect their reputations, need to buck this trend.

Unicorns have gender pay issues too

Bridging the gender pay gap requires more than gender parity by volume. Analysis by alva of the UK’s financial ‘unicorns’ – private start-ups valued at over $1bn – reveals how gender diversity and gender pay gaps can be misaligned. Over the period October 2021 to April 2022, it surfaced significant controversy over the lack of alignment between fintech’s relatively diverse employee base and its gender pay gap statistics.

Despite generally positive progress on promoting women, the UK’s fintech start-ups don’t pay their female employees commensurately, with a worse than average gender pay gap, outlined in the chart below. Comparing women’s mean hourly wages to every £1 a man earns, the three neobanks register pay gaps at least 10 percentage points worse than the national average between 2019 and 2021. Revolut’s gender pay differential remained flat throughout the period, but Starling Bank and Monzo saw an improvement. (It should be noted that the reported increase in the national average pay gap between 2020 and 2021 is likely incorrect due to measurement issues during the Covid-19 pandemic.) 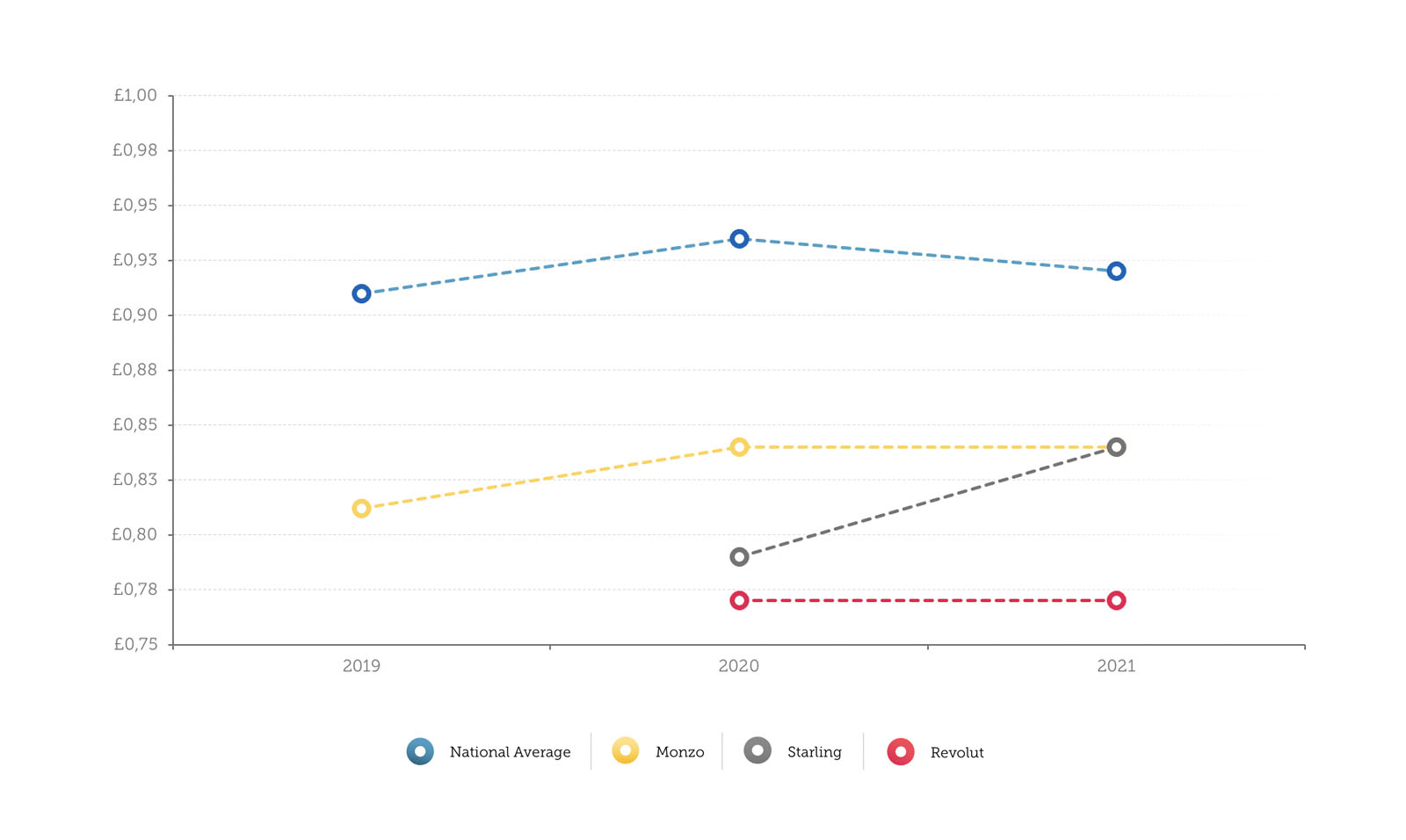 The impact of gender pay data on reputation

Through live media monitoring and proprietary reputation analysis of millions of content sources, alva’s Stakeholder Intelligence ranked the three challenger banks on sentiment generated by their gender pay gap reporting, on a scale between -100 and 100. Taking sentiment as a proxy for stakeholder opinion, alva’s reporting reveals the impact of gender pay gap data on the neobanks’ reputations.

Overall, Monzo ranked highest, with a positive sentiment score of 65, boosted by a CityAM article in October 2021 reporting it had narrowed its pay gap relative to rival fintechs. For Starling and Revolut, the article sparked commensurately negative sentiment. Starling’s reputation risk was compounded in the same month when it was named in a Sifted article reporting on UK scale-ups’ worse than average gender pay gap. The challenger bank’s score fell to -54.

As Revolut demonstrates, statements don’t sway stakeholders if they’re not backed up by action. Without detailed action plans, gender pay gap reporting does little to tackle underlying gender inequality. To do so requires a long-term focus on gender parity, not short-term stats. Recruitment of young female talent, for example, results in an initial widening of the gender pay gap, but eventual gender parity in senior management.

To this end, fintech unicorns are pursuring gender diversity at every level. In its pay gap reporting, Monzo details changes made to ensure inclusivity in recruitment – re-phrasing job advertisements and inclusive interview training. To retain female talent, it also offers 52 weeks of parental leave; six days of leave for fertility planning; and 10 days following any pregnancy loss.

Revolut, meanwhile, has published a new D&I framework and appointed a specialist to execute it. It also extended its paid maternity leave in the UK from 16 to 26 weeks. Alone of the three, Starling has not detailed a specific action plan in its pay gap reporting, simply providing links to its D&I initiatives.

Without seismic change, gender pay gap reporting will make uneasy reading for any but the most progressive organisation’s stakeholders – and the fintech sector is particularly vulnerable to reputation risk around this issue. In order to take appropriate, targeted action to ameliorate the reputational impact of negative reporting, organisations need to surface and understand the sentiment surrounding the issue. Alva’s Stakeholder Intelligence reveals where the gender pay gap conversation is taking place and how fintech reputations are being represented. By identifying which stakeholders are engaging with this topic and through what channels, organisations can identify and initiate the best stakeholder engagement strategy to deflect reputational damage.

The race for talent: How are professional services firms adapting to attract the best