Thomas Cook has had a challenging year, with a number of incidents that have led to an increase in negative sentiment and reputation damage. Events culminated in widespread criticism of how it handled an inquest into the deaths of two children in a hotel booked through Thomas Cook.

This white paper explains why businesses need reputation intelligence and uses the Thomas Cook example to investigate the following issues:

These questions are particularly pertinent to organisations which are both seeking to understand the true impact of reputation on company performance, as well as those that are looking for guidance in implementing best practice solutions for reputation management.

From the analysis of millions of pieces of content (print, online, radio, TV, analyst notes, polls and social media among others) using alva’s integrated metrics and reputation analysis system, we can clearly observe the impact of the different events described earlier on public perception of Thomas Cook.

This allows us to objectively answer the question – “Did any of these issues actually resonate with stakeholders?”

The answer is a resounding “yes.”

The graph below charts Thomas Cook’s corporate reputation from the beginning of 2015 compared to that of the travel sector as a whole. Analysing this information gives us three striking findings: 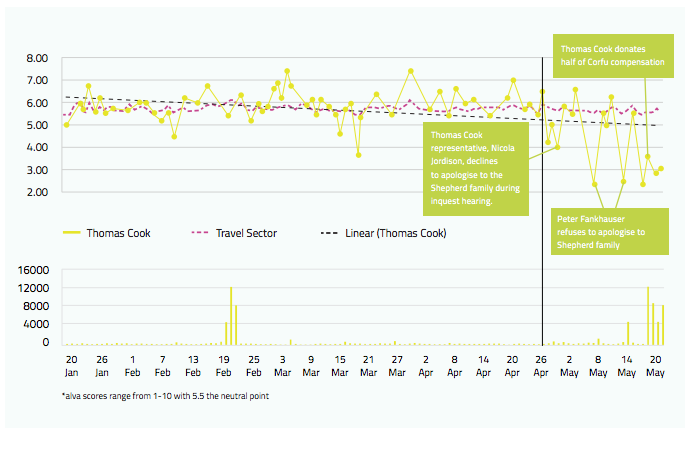 We can very clearly see from this information that from a public perspective, Thomas Cook’s reputation had become significantly worse than that of the rest of the travel sector and continued to trend downwards.

Thomas Cook: The affect corporate reputation had on share price

While it is clear from the evidence that Thomas Cook’s company reputation suffered in the wake of the widely-reported safety issues, the response from the investment community has been more equivocal.

The chart below covers the same period as the reputation graph, but tells a different story.

Here we can observe that there has been an upward trend in share price over the first half of the year, buoyed by positive investment news, such as the aforementioned Fosun take acquisition.

However, looking more closely at the data, we can detect a -12.77% decline in share price from the point at which the Corfu inquiry began to dominate Thomas Cook’s news coverage.

It is important to note that other travel operators experienced steeper declines in this same period, with Tui shedding -16.51% for example, but the downward trend was more than double that of the FTSE100 and other tour operators registered gains in that same period.

What we see from this is a delayed above-sector decline in share price correlating with a heightening of negative reputational issues.

Before the rise of technology facilitated a greater interconnectedness of stakeholders, reputation and share price could be viewed as almost wholly separate measures. This was because investors had their own interests and expectations which, by and large, existed in isolation from those of other stakeholders such as the public or customers.

This enabled companies to approach these stakeholders in very different ways and indeed led to the creation of separate siloed functions to deal with them (hence the separation of Investor Relations from Public Relations or Customer Services).

At alva, we are increasingly witnessing a greater blurring of the boundaries between the interests, expectations and needs of different stakeholders as information becomes more freely available and is able to affect investment, purchasing or employment decisions.

Nowadays, a canny investor has a whole arsenal of data upon which to base their investment decisions, including intangible factors such as customer satisfaction, employee engagement and other nonfinancial indicators, all of which comprise reputation.

The increasing influence of reputational factors on investment decisions has been the subject of many academic papers over the past ten years. A recent study entitled “Investor sentiment, customer satisfaction and stock returns”, in the European Journal of Marketing found that customer satisfaction is a valuable intangible asset that generates positive abnormal returns (*1) , while a separate research group run by Jaakko Aspara, professor in the Department of Marketing at Aalto University School of Business in Finland, showed that improved customer satisfaction causes institutional investors to increase their ownership in that firm and has a positive impact on share value (*2) .

These are just two examples of the growing convergence between a company’s reputational and financial performance thanks to the proliferation of perception data (print, online, radio, TV, analyst notes, polls and social media among others) and the consequent broadening of investment criteria to include non-financial information.

Reputation therefore can and does impact financial performance, however there is often a lag or delay in this being felt in the company’s share price.

The good news is that a reputational risk does not have to become a financial one, at least not if reputation intelligence is used to spot it early and then it is well managed.

The time lag between a reputational event and it denting a company’s share price provides a window of opportunity for companies to recover.

alva’s reputation analysis system identifies when a company is in an Amber or a Red Reputation Risk phase, as the graph below illustrates. 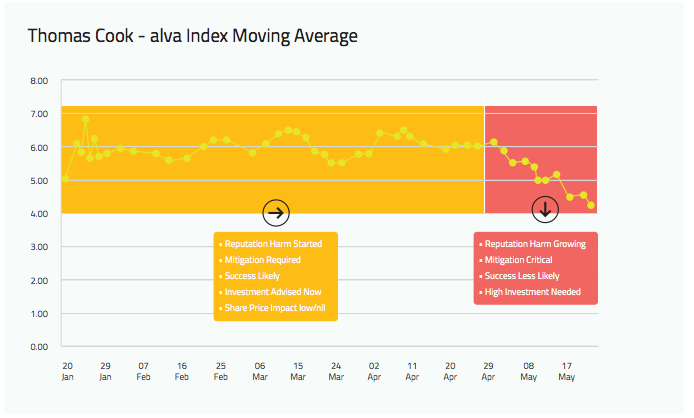 The Amber phase is typified by a decline in reputation score and this is indicative of the emergence and development of reputational risks which are beginning to damage stakeholder perceptions of the organisation. If a company implements the correct reputation intelligence within its organisation, these risks can be identified quickly as they emerge.

Amber phases are often part of the cost of doing business and at this stage there are opportunities to mitigate the risk to avoid further damage to reputation. The key here is to move quickly, intelligently and decisively to address the issues before they dominate the company narrative.

Investors at this stage are likely to perceive the issue to be short-term brand damage rather than a more serious assault on the long-term prospects of the company. As such, contrarian investors may actually drive up the value of the company by taking advantage of its lower pricing.

With hindsight, as many commentators have been quick to point out, there were a number of opportunities for Thomas Cook to demonstrate its humanity by putting the Fisher family’s needs first while reinforcing its commitment to safety. Greater transparency and compassion could have helped the company respond more sensitively to the tragedy than its own actions indicated.

The Red phase sees the company on the back foot and very much in crisis mode. The opportunity to mitigate the reputational risk has gone and damage limitation is the best available outcome.

This is where companies are liable to see the negative effects of reputational issues permeate tangible measures such as share price. This is because a proportion of investors may feel that the risk has moved beyond short-term brand damage to actually affecting the long-term prospects of the company, thereby causing them to divest.

At this stage companies will likely need to use reputation risk insurance and crisis management consultants to help manage the crisis. Even with these countermeasures, companies who have gone into the Red phase tend to suffer below market reputations for several months or years thereafter.

How can companies avoid reputational damage?

While every survey says that reputation is the Number 1 risk facing companies, the truth is that the majority of Boards are failing to support company-wide efforts to build reputation programmes and integrate reputation intelligence into their core strategy.

This reluctance to act puts companies at risk of damage to reputation. With growing evidence that reputation does affect financial value, Boards need to be more proactive in sanctioning enterprise-wide reputation intelligence programmes to ensure that this invaluable asset is managed correctly.

When corporate reputation was initially appearing on companies’ radars, many were unsure exactly how to assign the responsibility for this emerging field. Parts of the responsibility may have been allocated to Corporate Affairs, Marketing, PR or Risk functions. It is now imperative that those disparate departments, which may have previously had little interaction, work closely together to ensure that reputational risk is identified, quantified, managed and the outcome of the approach is understood.

Each role can contribute insights, which when combined, can be of great value to the corporation. The bigger reputational picture only fully comes into focus when the business understands the longerterm context of reputational shifts and how it compares with competitors, alongside a pre-defined strategy so it is agile enough to respond to issues that could strike at any time.

For companies to successfully respond to a reputational event, they need to have both the structure in place to deal with it and crucially the reputation intelligence to trigger an early response.

Companies which handle emerging risks best are those which use reputational insights to quickly spot when they are in the Amber phase.

A product such as alva’s 24/7 real time monitoring platform equips companies with up-to-the minute analysis on their reputations, and that of their peers, to really understand the currents that are affecting reputations in the sector.

Insight plus Action is a company’s best defence against damage to reputation.

Reputational events can have a delay before there is a financial impact. Reputation and share price are not the same thing but they are increasingly linked as investors broaden the range of information used to make investment decisions. Share price tends to be slower to react than reputation to a negative non-financial event, but if an issue moves into the Red phase it is likely to affect financial value.

Boards must take ownership of their corporate reputation. Boards have a crucial role to play in ensuring that a company’s reputation is both protected and enhanced. As we have seen in the case of Thomas Cook, failure to do so risks grave consequences for a company’s performance.

You can also download the full report as a PDF here