Of all the many seismic changes that 2020 has precipitated, one that may have gone under the radar of most people is the impact of the pandemic on perceptions of the UK supermarket sector.

Long lambasted for alleged price fixing tactics, squeezing suppliers and environmental concerns, the sector appeared locked in a race to the bottom. Indeed looking all the way back to January 2020, we witnessed concerns with sales across the sector, even industry leaders such as Morrisons saw a 1.7% fall in sales at the end of 2019, many supermarkets hinted that cost-cutting would begin. With the Brexit transition poised to move ahead with or without a trade deal, cost-costing was a prudent move for the sector.

And yet as the nation grappled with the practical implications of the coronavirus outbreak, supermarkets demonstrated qualities both of leadership and social conscience that few would have previously credited them with.

In this blog, we investigate how supermarkets have responded to the crisis, which have performed best and why, as well as looking forward to what 2021 may bring for this unloved sector.

First things first, the facts and figures. alva’s reputation analysis of the UK supermarket sector for 2020 shows an overall sector score of +29 – firmly in net positive reputational territory for the year. What’s most striking is the year-on-year increase; for 2019, the sector average languished at -31, meaning 2020 represents a whopping 194% increase in sector reputation score. This is comfortably in the top 3 best performing sectors in terms of y-o-y reputation increase.

It is also worth highlighting that our lowest ranked company – German discounter Lidl – still ends the year with a positive reputation score. This is not a tale of heroes and villains as we have often seen in the past, in 2020 all supermarkets are heroes.

Arguably, in previous years Supermarkets have had an overwhelming focus on two stakeholder groups: consumers and shareholders. This year was different with the shock of COVID-19, a rapid changing social, economic, and legal environment pursued. Despite the volatility, the supermarket sector has proven to be a champion in identifying and implementing initiatives aimed at all stakeholder groups. 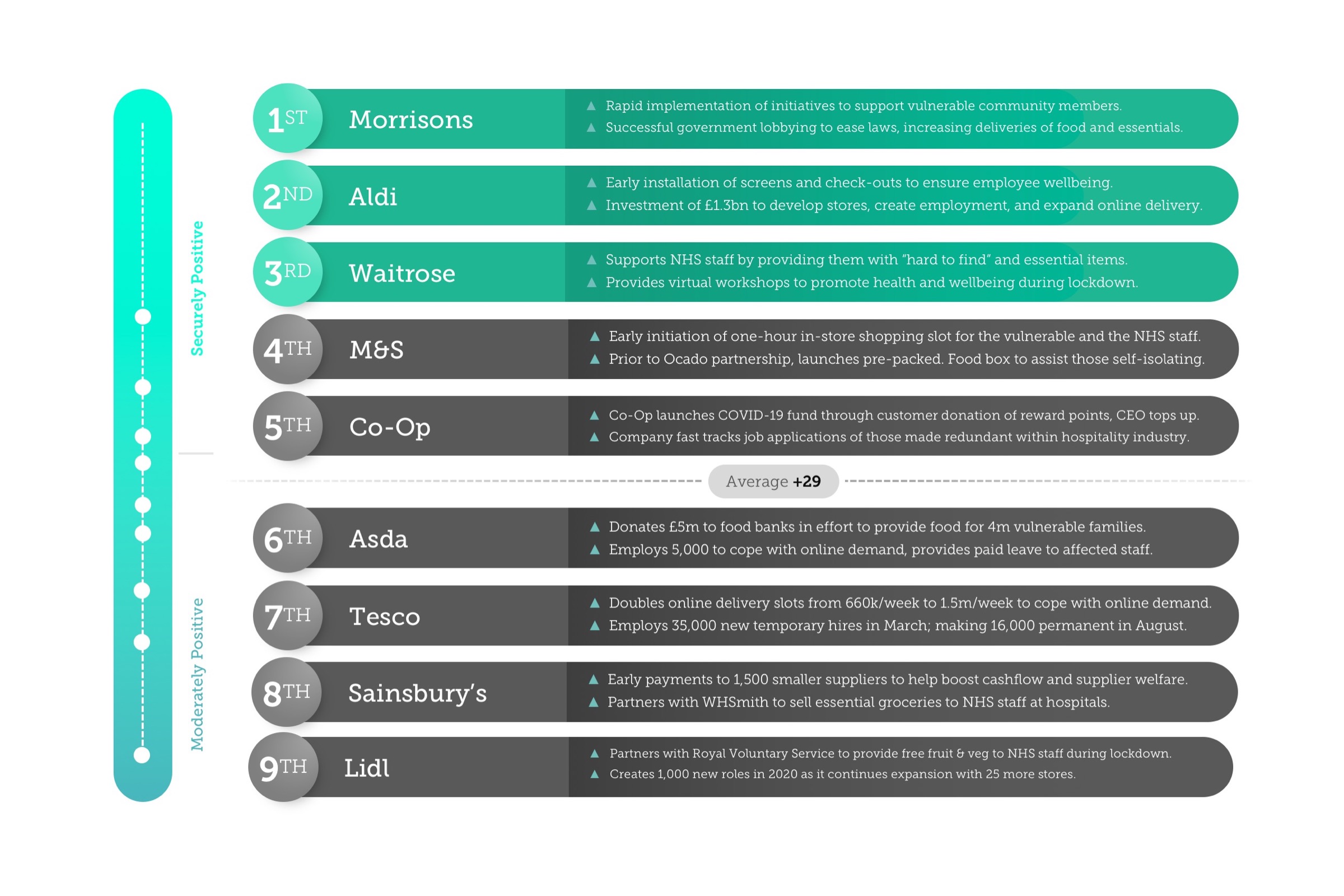 Tesco, Asda, and Lidl hired a combined 42,500 employees by the end of March to prepare and deliver online orders, while also ensuring social distancing measures were adhered to within stores. The Co-op reached out to workers within the pub and restaurant industry, offering them roles through a fast-track process.

We saw huge shifts in employee support, with Asda providing full pay for any staff members that needed to isolate, were over-70, pregnant, or were carers of vulnerable people. As a measure of goodwill, Tesco, Aldi, M&S, Sainsbury’s, Waitrose, and Morrisons all announced bonuses for their staff.

How will you impact tomorrow?

Supporting the wider communities, Morrisons launched a call centre dedicated to elderly and more vulnerable customers to enable them to get essentials as the self-isolation period began. The company also called for the government to relax competition law and other legislation so that the sector could increase delivery hours and increase weight limits on home delivery vans. The government responded immediately – agreeing and enabling the sector to do all it could.

With the sweep of the Black Lives Matter movement, the sector openly addressed their diversity and inclusivity practices with M&S and Tesco pledging to take more action stating that they could do better.

As we moved toward the end of the year, the sector plans to return the Business Rates Relief it received from the government. Initiated by Tesco, and followed through by Sainsbury’s, Morrisons, Aldi, and Asda, the sector will return a total of £1.8 billion in relief to the taxpayers.

A flash in the pan?

While consumers and shareholders still take a front seat, 2020 has shown that Supermarkets can be attentive to the needs of their wider set of stakeholders. In times of need, they have done the right thing. And this approach has helped them enhance their reputations, increase stakeholder support and improved their overall standing within society.

As we move into 2021 and, perhaps, beyond the crisis phase of the pandemic, the question remains whether this proactive, stakeholder-centric modus operandi will persist. There is a huge opportunity for Supermarkets to cement the reputational gains of 2020 and to re-establish themselves as cherished institutions at the heart of British society.

What is ESG Materiality?

How does media monitoring work?