alva’s analysis featured in an article in the International Business Times, focused on Amazon’s workforce policies. 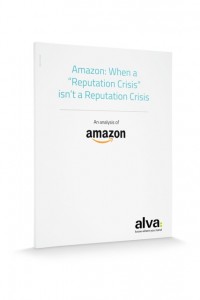 In the wake of an expose in the New York Times on Amazon’s treatment of its staff, we were curious to see what impact the negative coverage was having on Amazon’s reputation among their key stakeholders.

You can read the full report for free using the form to the right, but our key findings were:

Worldpay rising: what are the reputational opportunities?