Brexit: Which politicians are performing best ahead of the EU Referendum?

The UK public go to the polls tomorrow to vote on whether they should remain in the EU or leave. The issue has been hotly debated in recent weeks, with numerous television debates and print campaigns.

In order to get an insight into how the vote may go, we used our media measurement service to analyse over 140,000 pieces of publicly available UK content in the week before the referendum on 23rd June, to understand the public sentiment towards the most prominent political figures on both sides.

Figure 1: Politician sentiment scores for the week leading up to the vote

The table shows that three of the top five politicians are on the “Remain” side of the debate. New London Mayor, and Remain supporter, Sadiq Khan topped the ranking, while prominent “Leave” supporter, Iain Duncan Smith, was close behind in terms of sentiment. It is worth noting that the two best performing figures for sentiment were also the two with the least amount of coverage. Sadiq Khan featured in 7% of all analysed coverage, while Iain Duncan Smith only featured in 1%.  There was little between the sentiment scores or coverage volumes for Boris Johnson, Jeremy Corbyn and Nicola Sturgeon. 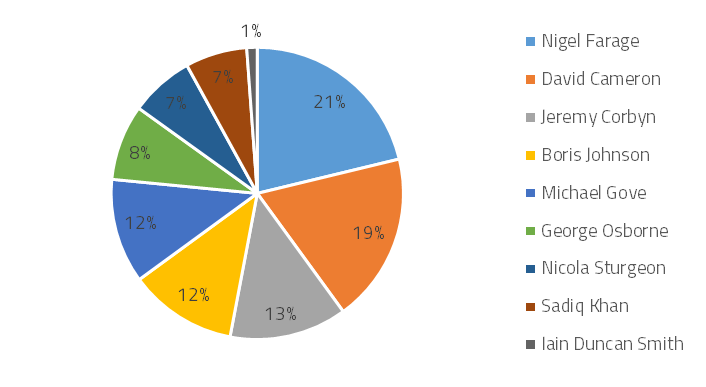 The graph above shows that Nigel Farage has been the most prominent figure in the Brexit debate in the week leading up to the vote, featuring in 21% of all coverage and forcing the spotlight onto immigration. David Cameron is close behind on 19%, but he has not been able to control the agenda, as immigration has accounted for almost 14 times as much coverage as any other issue. 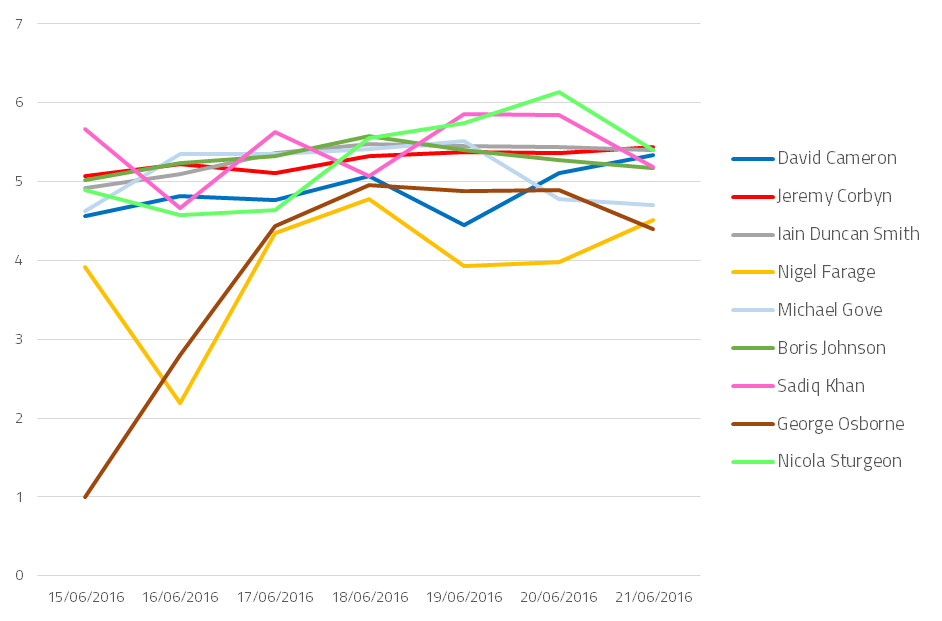 In the week leading up to the vote it was clear that George Osborne and Nigel Farage were the least popular. At the top end, Nicola Sturgeon saw the biggest improvement across the week, moving from 3rd bottom on the 16th-17th to having the single highest score of anyone during the week on the 20th. Sentiment towards David Cameron fluctuated throughout the week but he was finishing strongly in the days leading up to the vote, with his sentiment increasing 20% from the 19th-21st.

With Nigel Farage and David Cameron dominating coverage for the respective sides, and consequently receiving some of the lowest sentiment scores, the result could come down to which of the two can convince most of the undecided voters. At this point Cameron appears to be out in front and if it goes against them the Leave campaign may rue allowing Farage to be such a prominent figure.

Footnote: The methodology – how do we calculate sentiment scores?

The alva algorithm calculates sentiment scores out of 10, where a score of 5.50 is considered neutral. The algorithm takes into account the volume, influence, prominence and relevance of real-time mentions from 80,000+ news sources, more than 3m blogs and forums, 100+ social networks. A score above 6.00is considered strong, while a score below 5.00 is considered weak. “Digital” refers to mentions of online and mobile channels, including for customer service and everyday banking.