The UK’s decision to leave the EU has seen huge implications for both of the main political parties. David Cameron’s resignation means the race is on for a new Conservative leader, but the Labour Party has also been thrown into chaos, with 20 of Jeremy Corbyn’s shadow cabinet resigning in an alleged “coup”.

Corbyn has been accused of, at best, “undermining”, or at worst “deliberately sabotaging” Labour’s Remain campaign.

To understand how this has affected public sentiment towards Jeremy Corbyn, we used our media content analysis service to review almost 50,000 pieces of publicly-available content over the previous fortnight.

In the week leading up to the Brexit vote, Sentiment towards Corbyn had been comparatively positive, averaging out as very similar to Boris Johnson. However, in the days following the vote, Corbyn’s sentiment has plummeted, falling 51% between Thursday and Sunday.

One of the main criticisms levelled at Corbyn has been weak leadership due to his reluctance to take a visible and enthusiastic position on the EU. It has been argued that this resulted in an ambiguity towards Labour’s stance, and the resulting Brexit result could hit Labour’s traditional supporters hardest.

So is it fair to say that Corbyn wasn’t visible enough in the lead up to the vote? 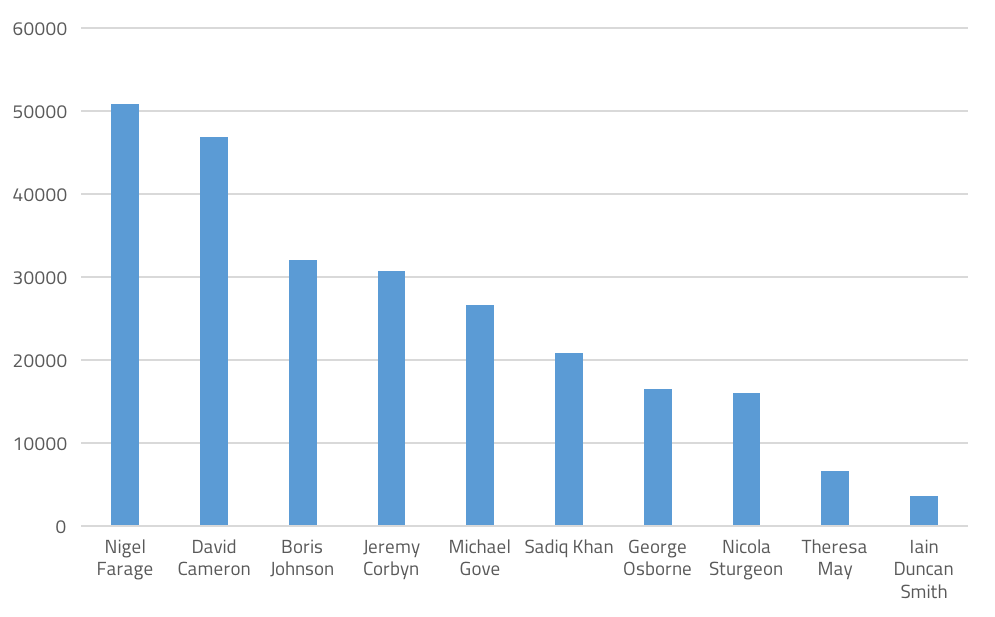 In the fortnight leading up to the vote, Corbyn received a similar amount of coverage as Boris Johnson, one of the most prominent figures in the debate. While both were behind the Brexit figureheads of David Cameron and Nigel Farage, the fact Corbyn was generating more discussions than Michael Gove and George Osborne, deputies in the Leave and Remain campaigns respectively, does suggest he was remaining pretty visible in the lead up to the vote.

However, Corbyn’s reported passivity over the pivotal issue of immigration meant that Farage could dominate the agenda and potentially influence Labour’s demographic. Immigration was referenced in 75% of all content in the weeks leading up to the vote, so avoiding this subject was in practice avoiding the core issue.

If we compare the 3 days following the vote results to the 14 days leading up to the vote, there have already been 24% more discussions about the economy and 466% about welfare. These are topics you might traditionally expect to be of concern to Labour’s demographic, and now that the implications of the Brexit vote are becoming clearer, there is increasing concern about these issues. Corbyn appears to have failed to address them before the vote, or effectively tackle the immigration issue.

We have seen a low pre-Brexit profile benefit Theresa May as she is not tainted by either side and has the potential to be a unifier for the Conservative Party. However, in a divided party, with strong internal support for Brexit, the emphasis was not on her to make a case for either side, unlike the leader of the largely pro-Remain Labour party.

*Footnote: The methodology – how do we calculate sentiment scores?

Brexit: Which politicians are performing best ahead of the EU Referendum?