The political ramifications of the UK’s decision to vote out of the EU are still being felt, but the immediate outcome was the resignation of Prime Minister David Cameron.

With the UK entering a period of extreme uncertainty, there have been calls for a new leader to be elected quickly to help steady the economy and begin negotiations to exit the EU. After the success of the leave campaign, it has widely been suggested that the next leader is likely to be a Brexit supporter.

In order to try and identify which politician is best placed to become leader, based on positive sentiment and public support, we analysed almost 118,000 pieces of publicly-available content over the past two weeks. We analyse the two early front-runners as well as prominent figures from the Remain and Leave campaigns and discover:

If we examine the previous fortnight, the two front runners Boris Johnson and Theresa May had very similar sentiment scores, although Johnson received around three and a half times as much coverage as May.

One of the outsiders for the leadership, Stephen Crabb, had the highest average sentiment score over the period, while Jeremy Hunt, another potential nominee was second. Both of these figures probably benefitted from low coverage during the bitter Brexit campaign as this enabled them to avoid being strongly associated with either side. While Labour’s two most recent leadership appointments were outsiders, Crabb will have a lot of work to raise his profile to compete with the other contenders. Hunt has been a much more prominent figure, but his previous handling of the NHS junior doctors’ contract dispute saw his sentiment trail well below his peers for the majority of this year.

Michael Gove is expected to support Johnson, and his place in fifth reflects the lack of public support for his own leadership bid. Similarly,George Osborne, David Cameron’s main partner in the Remain campaign, has ruled himself out of the running, and his poor performance over the previous weeks suggests this was a sensible move.

However, the fall-out of the Brexit vote has seen some significant swings in sentiment since the outcome was announced. 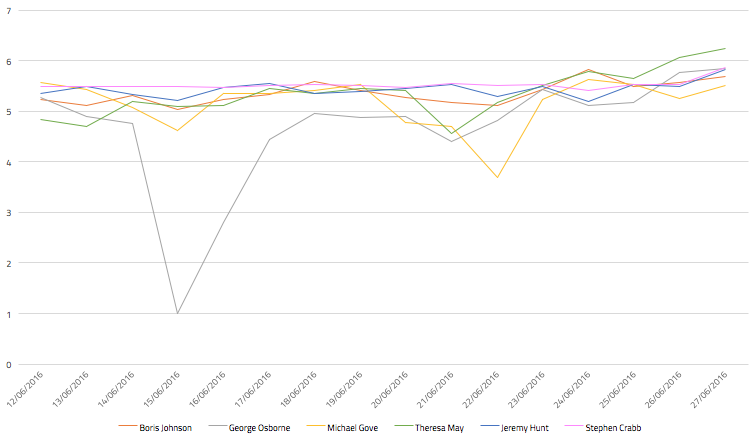 The main beneficiary has been Theresa May, who having also kept a low profile during the debate has received a boost in sentiment, most recently receiving the single highest daily sentiment score for any candidate over the two-week period.

The other notable figures to receive positive responses in recent days have been Jeremy Hunt, Stephen Crabb and George Osborne. Both Crabb and Hunt were not very visible in the lead up to the campaign, but both were on the Remain side. They have both since had a boost in sentiment and visibility as they position themselves as potential opponents to the Brexit supporters amid vast economic uncertainty. For long periods leading up to the vote, Osborne had trailed badly behind the other main politicians, even falling behind Nigel Farage in sentiment scoring. However, in the days following the result, Osborne received a boost in sentiment that put him behind Theresa May but above current favourite Boris Johnson.

Johnson himself had seen a decline in sentiment following the Brexit vote, but it had been consistently high across the previous fortnight and most recently has seen an upturn, scoring 6% above his average for this period. Michael Gove’s sentiment followed a similar trend following the vote and he ranks last among the peer group.

While the potential for a backlash against the Brexit outcome means the pro-remain outsiders Crabb and Hunt can’t be discounted, the current speculation is that the leadership battle will be between Johnson and May. Johnson is the favourite and his consistently high scores and high volume of coverage supports this. However, May’s low profile throughout the bitter Brexit campaign has left her relatively untarnished by both sides and is being touted as a potential unifier.

If May can continue to leverage the strong boost in sentiment and also increase her visibility, while negativity about the potential economic impact of Brexit builds against Johnson, she could be best placed to consolidate public support for the Conservative Party during uncertain and divisive times.

* Footnote: The methodology – how do we calculate sentiment scores?