Today the Tory party will narrow down the leadership candidates to the final two, following the elimination of Liam Fox and the withdrawal of Stephen Crabb earlier in the week.

While Michael Gove was prominent throughout the EU Referendum campaign, and Theresa May has been a leading member of David Cameron’s cabinet, Andrea Leadsom has previously kept a lower profile.

Ahead of the second vote, we examined 350,000+ pieces of content, across mainstream media and social media over the last five days, to understand: 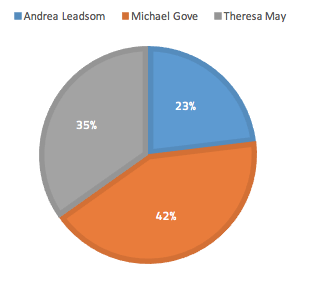 Figure I shows us that Michael Gove has received most mainstream media exposure, although 40% of this came directly after he announced his candidacy. While this will include negative coverage from Boris Johnson supporters claiming Gove “knifed him in the back”, this coincided with Gove’s sentiment peaking at the highest point in the last fortnight.

Andrea Leadsome has received the lowest amount of mainstream media analysis since announcing her leadership bid. Leadsome only became an MP in 2010, so it might be expected that she received less coverage than her more established peers. However, one FT journalist’s Tweet, that he’d never heard of Leadsom before, highlights her lack of familiarity.

This same Tweet also reveals another emerging reputation risk, with recent claims that she embellished her CV, specifically around her previous career in the City. While this new angle will probably increase her mainstream visibility, it is unlikely to be in the positive light she would have wanted.

However, it is not all bad for Leadsom. Figure II shows that while she has been comparatively overlooked by the mainstream media, there is a significant swing when it comes to social media. 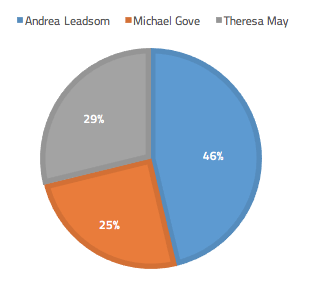 Since announcing she would run for leader, Leadsom has been referenced in almost half of all social media discussions related to the three rivals. This would suggest there is a significant public interest in her, with the most shared single message being Boris Johnson backing Leadsom for leader, closely followed by her own announcement.

Leadsom also received significant backing from other prominent sources, such as @LeaveEUOfficial, Katie Hopkins and Nadine Dorries. At the same time she was also receiving good momentum from hashtags like #Andrea4UK, #Andrea4leader and #Freshstart, as well as unaffiliated accounts like @andrea4leader.

Of course, not all social media content related to Andrea Leadsom was positive. The aforementioned Tweet from FT journalist John Gapper was one of the top 5 most shared messages related to Leadsom, while Guardian journalist @Claire_Phipps and FT journalist @HenryMance also published widely-shared negative Tweets.

With the next stage of voting imminent, the timing of the accusations around her career experience may affect voting before she can fully respond. However, despite previously being under the mainstream media radar, Andrea Leadsom has been generating a lot of conversations among the public. Therefore she could be a strong outside bet if she gets through to the final vote and can continue to build on this public interest.

The Ultimate Guide to Media Analysis Download this case study

Download Now
Media Analysis 1. What is media intelligence and how has it evolved? 2. Why you need a media intelligence platform 3. Media Intelligence and Reputation Intelligence: The internal and external perspectives 4. What are the benefits of media analysis? 5. The ultimate guide to media analysis 6. The 7 things to look for in your media coverage analysis 7. UK Media Turns On Government: An alva Media Case Study 8. Tory Leadership race: media coverage comparison 9. Measuring PR impact