As the Frankfurt Motor Show 2017 gets underway, two of the key innovations likely to feature heavily will be driverless cars and electric cars.

Over the coming weeks, alva will be analysing which automotive brands are getting discussed most in relation to these themes, as well as which manufacturers made the biggest impression at the event.

Our initial focus is on driverless cars – an innovation still in the testing stage, as both manufacturers and service providers attempt to perfect the technology.

We analysed millions of global online discussions related to 30 of the leading car brands, between Jan – Aug 2017, to discover which manufacturers were driving this emerging technology. 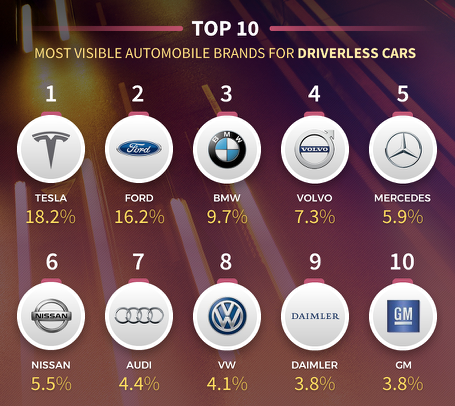 Elon Musk, CEO of Tesla, has been very vocal on the subject of driverless cars, predicting that they are only two years away and that most new cars will be driverless within a decade. Of course, in 2016 Tesla were the subject of one of the most infamous incidents involving this emerging technology, when a driver was killed using its autopilot mode, so there is still significant negative legacy coverage from this event.

It is therefore no surprise that Tesla tops the ranking for the brand being most discussed in connection with driverless cars. The pie chart below shows that Tesla feature in almost a fifth of all discussions on the subject, followed by Ford, BMW and Volvo. In fact, these four manufacturers combined account for over half of all discussions across all thirty brands analysed. 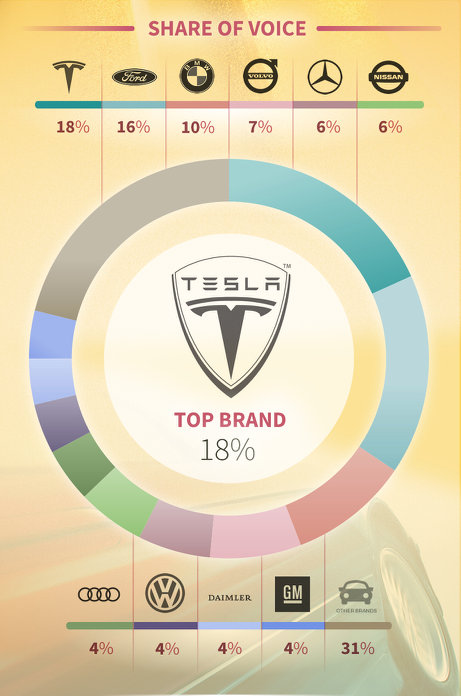 The graph shows that Ford have taken an active stance on driverless cars, with reports that they are to invest $1bn over the next five years in Argo, a driverless car unit. This was followed by the news that Jim Hackett, Ford’s head of driverless cars was to become its new CEO, specifically to “accelerate a strategic shift to capitalise on emerging opportunities”.

As Ford’s stock has fallen 40% over the last three years, the company has placed a significant focus on driverless cars, pledging to have a fully autonomous vehicle in commercial operation by 2021.

BMW has also set 2021 as the target for its own driverless cars, partnering with Intel and Mobileye to develop its offering. Fiat Chrysler Automobiles agreed to join the BMW/Intel driverless car consortium in mid-August 2017 and when both the Chrysler (3.5%) and Fiat (2.8%) brands are combined, they account for over 6% of all coverage, positioning FCA as one of the more influential manufacturers.

At the other end of the scale, luxury brands like Bentley, Rolls Royce and Aston Martin account for less than 1% of coverage combined, while Saab, Skoda and Suzuki have largely been missing from the conversation, accounting for the bottom three places in the ranking.

Methodology note: To keep this analysis rather high level, we chose to focus solely on “General Motors” references rather than “GM,” due to a high-level of noise around the “GM” keyword. When “GM” is included in the research, the company would be expected to place in the top 4, but we would want to further quantify our insights for any firm interested in a more in-depth analysis.

Which car manufacturers made the biggest splash at Frankfurt Motor Show 2017?

Mining Indaba 2017: How have the key issues progressed since the event?