Which car manufacturers are most visible around electric and hybrid vehicles?

One of the hottest topics at the 2017 Frankfurt Motor Show has been electric cars, with some speculating that the automotive industry is getting to the point where electric cars are crowding out traditional combustion engines. In July 2017, the UK Government announced it would ban the sale of all petrol and diesel cars by 2040, meaning this is a crucial technology for every car manufacturer.

Following on from our analysis of the car brands leading the discussions around driverless cars, the second in our automotive innovation series ranks the brands which are dominating discussions around electric and hybrid vehicles.

alva has analysed millions of global online discussions relating to 31 leading brands, between January 2017 to the start of the Frankfurt Motor Show in mid-September.

Table 1: The Top 10 automotive brands being discussed in relation to electric cars

Tesla appears in nearly a third of all discussions around electric and hybrid vehicles. Tesla led the way for this innovation since it launched the first mass-produced electric sports car, almost a decade ago.

Elon Musk, Tesla’s CEO has been a vocal proponent of this technology, so his profile combines with the brand’s first mover advantage to ensure the company remains the yardstick by which the industry is measured.

Nissan was the second most visible car manufacturer in this space. The company’s recent announcement about the increased range of new models of its flagship electric Leaf brand, was seen by many to be a direct challenge to Tesla’s position in this space. The Nissan Leaf is already the world’s top-selling fully-electric vehicle, but the limited range of the current Leaf model has seen its commercial advantage being eroded.

BMW’s brand was the company’s dedicated electric vehicle line, which enabled the company to leverage attention around a focal product. However, as electric and hybrid technology becomes more mainstream the company announced that by 2019 it will produce electric or hybrid versions of all its models.

Chevrolet placed fourth with significant early hype around its Bolt brand, which won the North American Car of the Year award, having already been named in Time’s 25 Best Inventions for 2016. The brand’s differentiator was as an affordable and longer-range product, becoming the first U.S. made, the fully-electric, mass-market car when it beat the Tesla Model 3 to market.

Chevy’s parent company, GM, also feature in the top 10. There is a significant cross-over with both being referenced in the same content., If we combined all the content that featured either brand, it would account for 8.9% of discussions, placing them comfortably second behind Tesla. In addition, the analysis does not account for the additional coverage that the rebadged European variant, Opel Amera-e, may have also received.

Ford has put more focus on its hybrid offerings, with six of the seven new models announced being hybrids. It has been a relatively late adopter to fully-electric vehicle technology, with its first all-electric vehicle scheduled for launch in 2020. These two issues have generated a significant amount of coverage, placing the company in fifth.

The potential range of Ford’s future all-electric SUV and its ability to differentiate itself through the mass-production of this model were key focus points. It was also visible in the non-consumer space, with significant coverage around plug-in hybrid vans as well as a hybrid police car with an electric boost for high-speed chases.

The Toyota Prius was once synonymous with hybrids, but 2016 was a difficult year for the brand, with lower petrol prices resulting in a 26% fall in US Prius sales. At the time Toyota stated that this was symptomatic of the wider hybrid sector and that it still accounted for 70% of the market and is the top-selling electrified car to date.

However, Ford Fusion Hybrid overtook the Prius for US sales in January, the first time any brand surpassed the Prius in this market. Since then, this trend reoccurred in half the subsequent six months, leading to suggestions that 2017 was the year of decline for the Prius.

The brand’s sixth place ranking suggests there is some cause for concern, but when UK reports show a 31% increase in H1 2017 Prius sales, the lack of coverage may be more to do with familiarity rather than a commercial decline.

At the other end of the scale, Saab and Skoda were once again in the three least discussed companies, joined by Rolls Royce.

When looking at the balance of coverage for both automotive innovations, it is clear that Electric and Hybrid vehicles are still dominant over Driverless vehicles. 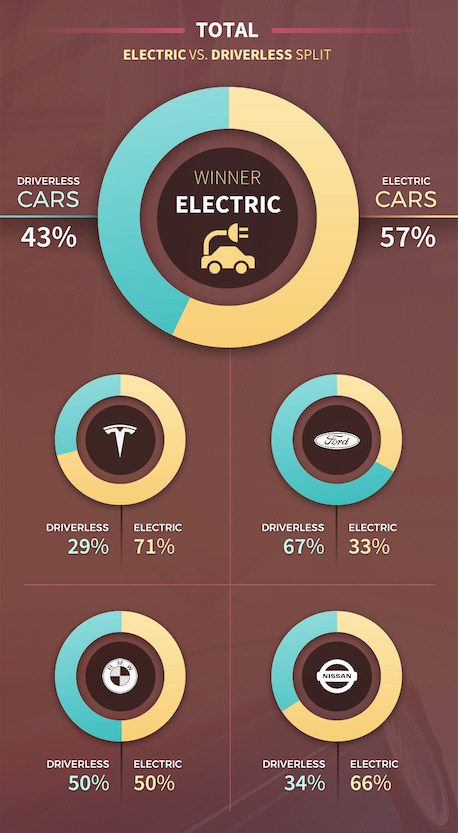 However, despite driverless cars still being in development, it still accounts for over 40% of discussions, indicating the vast interest in this technology.

While Tesla leads the way for both themes, it is clearly still weighted towards electric vehicles, with this accounting for over 70% of the combined coverage.

Nissan, another of the most visible brands across both topics had a similar split, with two thirds focused on Electric Vehicles.

The reverse of this is Ford, with two thirds focused on Driverless vehicles, while BMW had an even split between the two.

How companies can measure Advocacy on Social Media