For many in the UK, the festive season really gets underway once the main retailers launch their Christmas adverts. We saw last year how John Lewis had established itself as the brand leader for these campaigns, both in awareness and positive public sentiment.

Now that all the major 2017 adverts have been released, we review how the big brands have performed.

Which 2017 Christmas advert got the best response on launch?

As most retailers launched their adverts on different dates, we have standardised the timing to reviewed the 5 days before and after the respective release day.

Graph 1: Brand sentiment before and after the launch of each Christmas advert 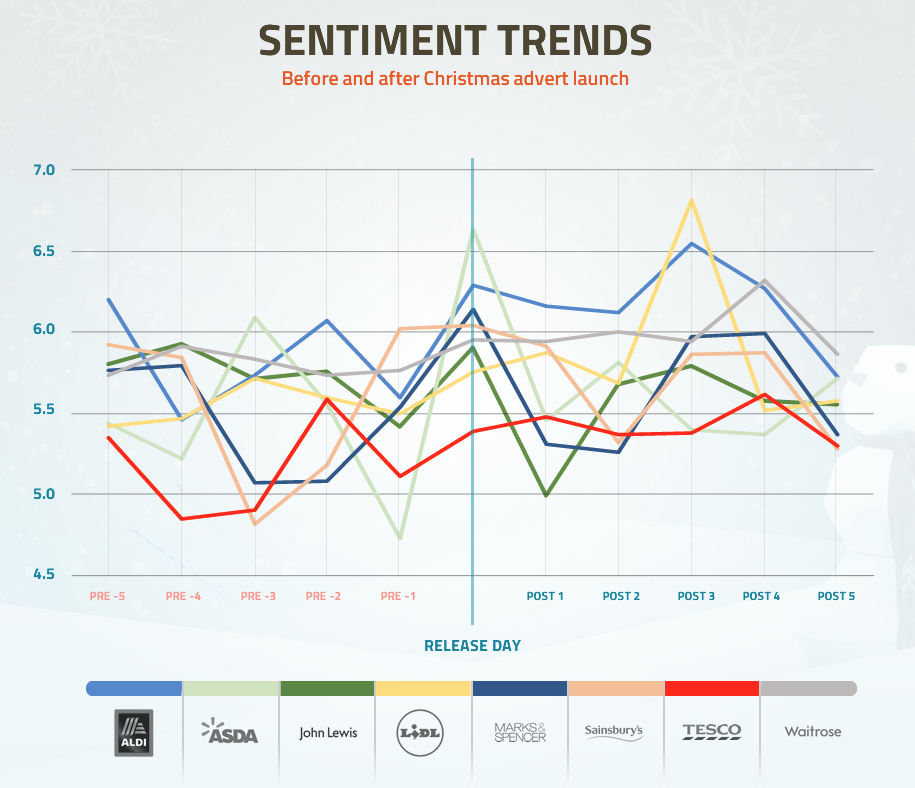 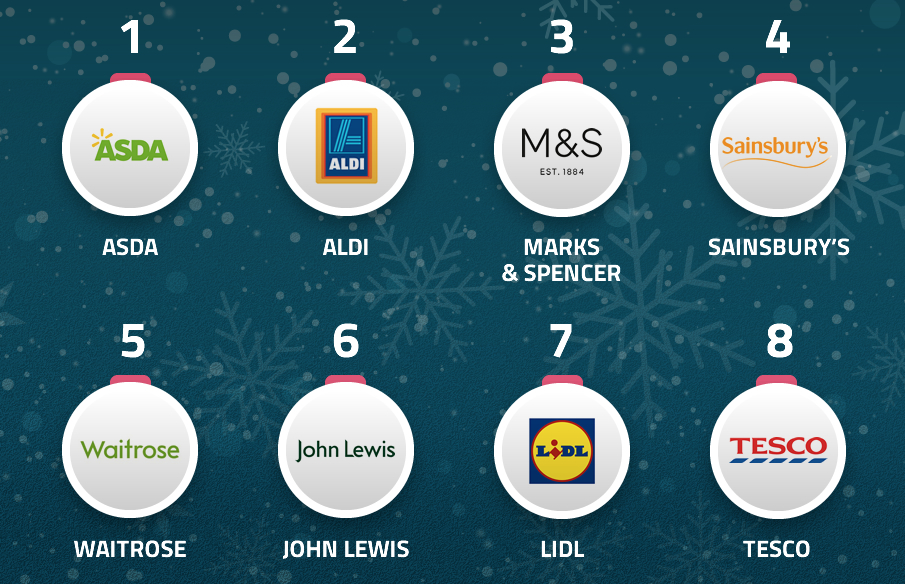 We can see from graph 1 that Asda achieved the most positive sentiment on the day of its advert’s release. This could partially be because it was the first to launch and so it benefited from positive coverage towards the other forthcoming releases. However, Lidl also released its advert at the same time and did not achieve a similar peak. Instead it was Aldi, Lidl’s closest competitor, that achieved the second highest sentiment score on the day of launch, closely followed by M&S with its Paddington Bear themed campaign.

Tesco was the only brand to receive a negative response on its launch day, possibly in relation to dubious criticism from some around the campaign’s inclusive theme, featuring a variety of faiths.

John Lewis did receive a positive response on launch day, but it was only 6th out of the 8 brands analysed. However, the potential impact of a positive or negative response is only clear when we consider the volume of discussions around each brand. Graph 2 shows that, while John Lewis may not have matched other brands for positivity, it dominated launch day coverage. 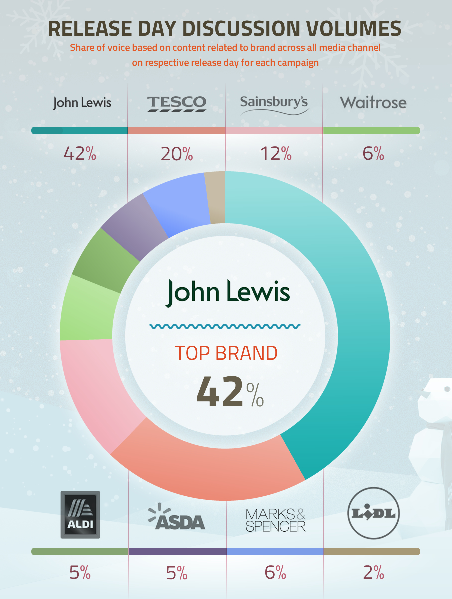 With more than double the amount of launch-day discussions, John Lewis maintains a similar level of dominance to what we saw last year. In contrast, the three companies with the highest positivity were also the three least discussed brands, with a combined share of voice of 11.4%.

Tesco’s negative response will be more concerning considering it also achieved a significant portion of coverage on launch day, meaning this sentiment will have been widely amplified. Of course, what this does not necessarily take into account is the normal expected levels of coverage each brand receives.

What impact did the Christmas advert launch have?

To understand more about the actual impact each advert had on release, we’ve analysed how the volume of discussions on launch day compares with the November average. 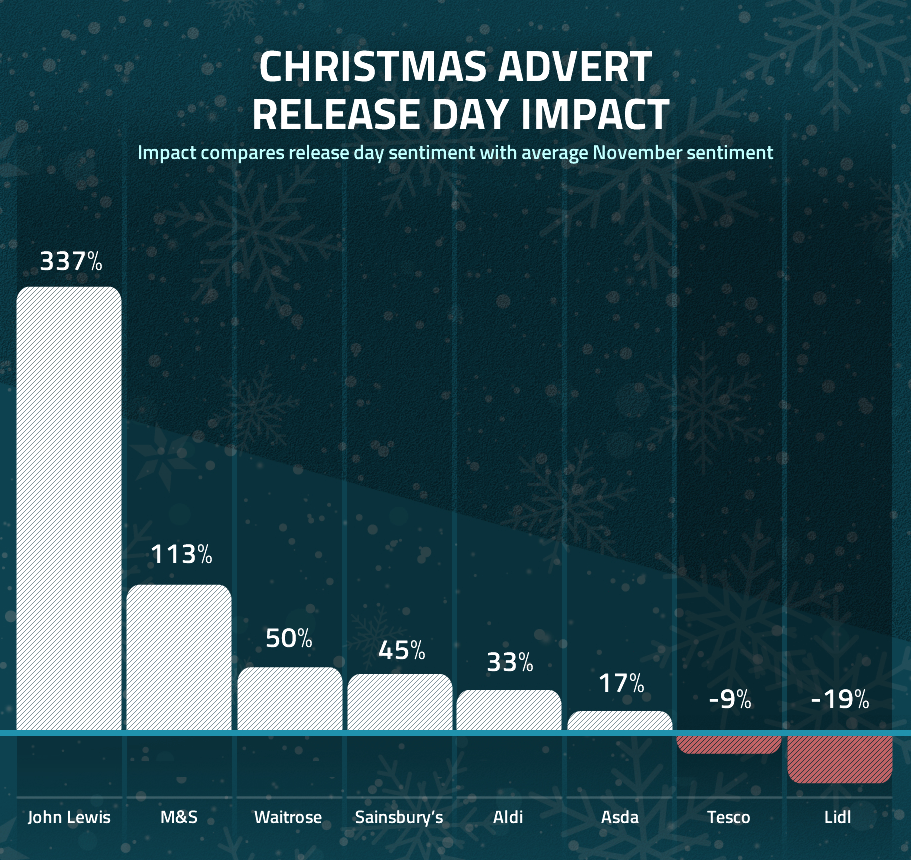 This highlights the boost in visibility that John Lewis received around its Christmas advert campaign, with an increase in discussions of more than 330%. We can also see that although M&S’s launch day coverage was modest compared to the others analysed, it still represented a significant increase in its usual base level.

On the other end of the scale, Lidl and Tesco actually received less coverage on advert launch day than they averaged for the rest of the month, indicating that the campaigns may have underwhelmed.

Of course a Christmas advert isn’t just for launch day, it is intended to maintain a steady level of awareness throughout the festive buying season. With this in mind, we have reviewed the subsequent impact of the adverts in the five days following launch, comparing to the five days before. 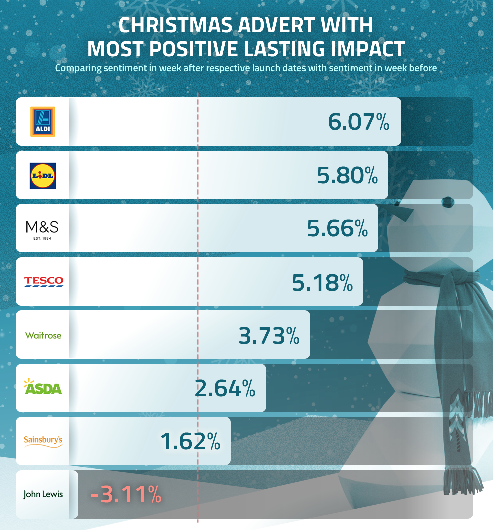 Aldi appears to have been one of the big winners of the Christmas advert campaigns. Although its coverage volumes and increase were relatively modest, it achieved the second best sentiment on launch day, and also received the highest subsequent boost in the following week. The company’s decision to continue last year’s theme, with the returning “Kevin the Carrot”, appears to have been well received by the public. While every other brand has gone with a stand-alone theme for 2017, Aldi’s success suggests there is the potential to build an on-going following around a single figurehead or theme.

The other brands which received less coverage on launch day have also maintained the highest positive sentiment in the period after launch. This could indicate that there are longer-term gains to allowing the campaign to grow organically, rather than the boom and bust of a hyped launch announcement.

Interestingly, the only company to see a subsequent drop in sentiment following the launch was the most prominent, John Lewis. Last year they led the pack for subsequent sentiment, so this turn-around is a strong indication that the 2017 campaign has not lived up to the pre-release hype and expectations. November coverage related to John Lewis also fell by around 10% compared to 2016.

John Lewis may well still dominate the Christmas advert space, but this could be an early signal that there is a certain amount of consumer-fatigue for its tried and tested formula. Perhaps consumer attention is increasingly being drawn away from the traditional conceptual television adverts, towards the deal-focused Black Friday campaigns. Indeed, if we consider all content related to either Christmas adverts or Black Friday from November 2016 and November 2017, 85% is focused on Black Friday.

This shows that despite Black Friday being focused around a smaller time-frame than the seasonal adverts, it has a much bigger impact in the consumer mind-set. While Communications teams’ focus may get drawn to the advert campaigns, due to the press interest surrounding these campaigns, there is a bigger potential audience around Black Friday, with the additional benefit of a more tangible impact on direct sales.

Trust and the Authentic Business

Which car manufacturers are most visible around electric and hybrid vehicles?